Racism is part of the Trump family DNA. 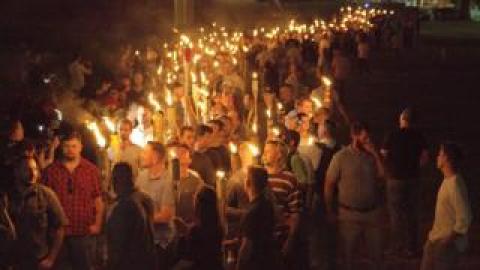 White nationalists gathered on Friday at the University of Virginia, ahead of the "Unite the Right" rally on Saturday , Reuters

Jon Wiener: The Confederate statue that was ostensibly the focus of the events in Charlottesville was of Robert E. Lee, who surrendered at Appomattox in 1865. What can you tell us about this statue?

Eric Foner: The key thing to remember about this statue, and most of these statues, is that they have very little to do with the Civil War. This statute was erected in 1924, almost 70 years after the end of the Civil War. It was erected at height of Jim Crow, the height of the era of segregation, disenfranchisement, and lynching. By the way, after the Civil War Robert E. Lee refused to criticize those who lynched black people or used violence of other kinds against them. He opposed black suffrage. He thought of himself as a gentleman, which he probably was, but he certainly didn’t think black people should have any rights.

Like all these statues, this one was erected as a statement about who’s in charge, about the power structure in society. My feeling is that it is not necessary to take down all these statues. Instead, I would like to see them erect other statues. Instead of taking down Lee, let’s put up a statue right near him—of, let us say, John M. Langston, a black member of Congress from Virginia in the 1880s, right after the end of Reconstruction. You don’t see very many statues to black leaders of the Reconstruction or post-Reconstruction South in Virginia or anywhere else. So if we’re going to talk about statues, I say let’s have the statuary be fully representative of Southern history.

JW: A lot of these demonstrators in Charlottesville called themselves neo-Confederates. What exactly is the neo-Confederate movement today? And what’s its connection to the president of the United States?

EF: The neo-Confederate movement has been around for a good while. Ostensibly their aim is to commemorate and glorify the history of the Southern Confederacy. But what they really are about is white supremacy, or what is sometimes called white nationalism. They use the Confederacy as a symbol of white supremacy, which they are trying to bolster in this country. It’s about who should be ruling America right now. Is Donald Trump a neo-Confederate? To call him that suggests he has coherent ideas—which clearly he does not. I don’t think he knows anything about the Confederacy or the Civil War, but he does know that these kinds of people are part of his political base—as he made clear on Tuesday in his defense of the white nationalist demonstrators in Charlottesville.

JW: His father was arrested after a Klan riot in Queens, New York, in 1927.

EF: Racism is part of the DNA of Trump. He and his father were sued by the Justice Department in 1973 for not letting black people rent the apartment buildings they managed. Trump first came to prominence on political questions when he took a full-page ad in The New York Times demanding the death penalty for four black young men who were accused and convicted—and later exonerated—of assaulting a woman jogger in Central Park. Trump became the spokesman of the so-called birther movement that denied that Barack Obama was a citizen of the United States. He certainly has played the racial card, as they say, very strongly both in his political and in his family’s commercial life. But Trump says, “I’ve got a lot black friends.” “I knew Muhammad Ali.” He once said, “I was Muhammad Ali’s best friend.” Which is probably an exaggeration.

JW: Probably. But it seems to me there nothing really new about neo-Confederates’ and segregationists’ hooking up with a Republican President. I’m sure that the demonstrators in Charlottesville noticed that Obama was not a white Southerner. You could go all the way back to Nixon’s “Southern strategy” in ’68 and ’72, and before that to Goldwater in ’64, who voted against the Civil Rights Act.

EF: Trump is an exaggerated form of what has happened to the Republican Party in the last half-century. We forget that before 1964, and even after that for a while, there were many Republicans who were strong civil-rights advocates. People like Jacob Javits, senator from New York State, and Robert Taft, the famous conservative Republican in the ’40s were strong supporters of black rights. The Civil Rights Act of ’64 would never have passed if Everett Dirksen had been not gotten some Republican votes for it in the Senate. This is the party of Lincoln—or at least it was.

What is different about Trump is how open he is about it all. Normally, the appeals to white racism are done through code words, like “law and order.” Trump campaigned saying all black people are living in hellholes and asking them, “What do you have to lose?” by voting for Trump. It’s become pretty clear what they have to lose: They can lose the right to vote. They can lose affirmative action. They can lose the notion the federal government sees racism as a serious problem in the United States.

JW: I saw a provocative question quoted in The New York Times: How are protesters tearing down Civil War statues any different from ISIS and the Taliban destroying historic monuments and museums?

EF: I don’t think anybody has identified the statue of Robert E. Lee as a world cultural-heritage site like those giant Buddhas that were destroyed by the Taliban. The main point is that tearing down statues is often a sign of regime change. What was the first thing that American troops did when they marched into Baghdad in 2003 in the Iraq War? They tore down the statue of Saddam Hussein. I don’t remember a lot of people saying, “We shouldn’t do that. This is destroying history. Saddam Hussein is part of the history. You may not like him, but nonetheless this is history.” No. We said, “Great, let’s tear it down.” Or in ’91 with the fall of the Soviet Union, crowds marched to the KGB headquarters and tore down the statue of the founder of the KGB. Nobody said, “Oh, they’re interfering with history.” When regimes change, the public presentation of history also changes. But the large number of Confederate statues all over the South makes you wonder how much regime change there actually has been in this country since the Civil War.

Eric Foner is a contributing editor of The Nation and an award-winning historian of the Civil War and Reconstruction, author most recently of Battles for Freedom: The Use and Abuse of American History, a collection of essays from The Nation magazine. He teaches history at Columbia University and is also a member of the Editorial Board of The Nation. The interview has been edited and condensed.

Please support The Nation's journalism. Get a digital subscription to The Nation for just $9.50!