food Was It Something I Hate? the Science of Food Preferences

In his new book, Einstein’s Beets: An Examination of Food Phobias, the distinguished writer and scholar, Alexander Theroux, discusses some of the current scientific and psychological research into food preferences and aversions

August 21, 2017 Nadia Berenstein Cook's Science
Printer friendly
Was It Something I Hate? the Science of Food Preferences Published August 21, 2017 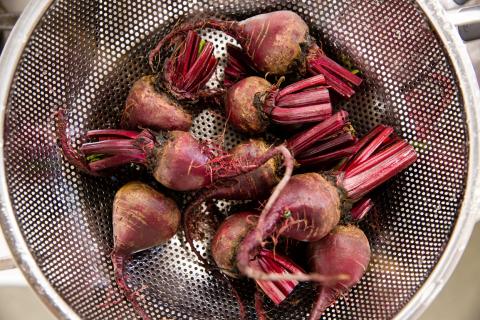 Beets: one of the most controversial of vegetables. In our experience people either love or despise them., Steve Klise

Alexander Theroux is a distinguished writer and scholar, and I began his new book, Einstein’s Beets: An Examination of Food Phobias, hoping to find a comprehensive account of its subject, incorporating science, literature, anecdote, and lore.

“Food aversions,” muses Theroux repeatedly, “are always revealing.” And a reader of this book will find out that W.H. Auden always skipped dessert; Warren Buffett drinks six Coca-Colas a day; James Beard loathed chicken livers and wild rice; Prince hated onions unless they were chopped very finely and enjoyed his spaghetti with a glass of orange juice; and Howie Mandel refuses to eat raisins.

What can we make of all this? It is difficult to say. Theroux offers only glancing, superficial accounts of some of the current scientific and psychological research into food preferences and aversions, but no sustained analysis.

This is profoundly disappointing, because food phobias are a fascinating and worthwhile subject. For instance, Bee Wilson’s First Bite: How We Learn to Eat and John McQuaid’s Tasty: The Art and Science of What We Eat, both published in 2015, each provide much richer accounts of the current understanding of food habits and aversions. These books draw on neuroscience, psychology, evolutionary biology, anthropology, and biochemistry to tell a complex story of how our tastes are formed.

To what degree are our appetites under our control? Are we destined to be disgusted by some things and delighted by others? Could Dr. Einstein have found a way to stop worrying and learn to love beets?

McQuaid’s book tells the story of Patient B, who, at the age of 48, survived a severe brain infection that left him with amnesia and permanent damage to his insular cortex, amygdala, and hippocampus, regions of the brain associated with taste, memory, and emotion. Patient B’s ability to taste was profoundly affected by his brain injury. He could no longer distinguish between saltiness and sweetness, and although there was evidence that he retained an unconscious preference for sweetness, he lacked any conscious awareness of its qualities. His dislikes vanished too. After watching an experimenter spit out food while making retching sounds, Patient B told researchers that he believed that the food was probably delicious. He associated feelings of hunger and pleasure with vomiting. He seemed to have lost the capacity to understand disgust.

Recently, neuropsychologists have found evidence that mirror neurons in the insular cortex, a group of highly specialized brain cells that activate empathically in response to the emotional cues of others, are particularly implicated in the feeling of revulsion. These scientists argue that we are grossed out when we witness others acting grossed out—that the intensely personal response of disgust has a profoundly social element.

Appetites are not solely dictated by the brain; they are part of an internal physiological dialogue, a relay between mouth and belly and mind about whether to eat something and whether to keep on eating it. In First Bite, Wilson documents the search for hormonal biomarkers that regulate feelings of hunger and satiety—the chemical signals that tell us when to eat and when to stop—describing genetic conditions such as Prader-Willi syndrome, in which an overproduction of the hormone ghrelin leads to an overwhelming and insatiable feeling of hunger. People with this and related conditions are often dangerously obese. Genes are also thought to play a major role in other eating disorders, such as anorexia nervosa, a disease that has proved extremely difficult to treat and cure.

But as important as brain structures, hormones, and genes may be in determining the material conditions of our hungers and the limits of our tolerance, our specific preferences and aversions are more than hardwired genetic reflexes or evolutionary legacies. They are shaped by the cultures in which we are raised, the places we pass through, the meals we remember and those we do not.

Wilson’s book takes a particularly close look at the various ways that our experiences in infancy and early childhood shape our later habits. For instance, recent studies have found that for a brief window of time, between four and seven months, infants are highly receptive to new flavors, then become resistant to them. However, standard Western pediatric practice recommends exclusive breast or bottle feeding during this time, which may make it more difficult to introduce a variety of foods later in childhood.

McQuaid discusses a famous experiment by psychologist Paul Rozin, who wanted to understand disgust’s triggers and probe its limits. His study involved children of various ages, ranging from 3 to 12½, who were presented with scenarios of escalating levels of grossness. In one, for instance, children were offered a plate of shortbread cookies and one dead grasshopper. For another group, the researcher sprinkled the cookies with green sugar, telling the kids that it was ground-up grasshopper but “tasted just like sugar.” In the final scenario, the researcher picked up the dead grasshopper, dropped it into a cup of juice, and offered the kids a sip through a straw. Rozin found that the willingness to sample the gross food varied tremendously depending on age; younger children were much less likely to be disgusted. “The sense of disgust evolves over the course of a lifetime,” McQuaid explains.

What both Wilson’s and McQuaid’s books reveal is that biology alone can never fully explain our eating behaviors. How we were fed when we were babies, our hormone levels, and our genes may contribute to our preferences and habits, but they hardly ever tell the entire story. Wilson, a clear-eyed guide to the history and controversies around “proper” eating, shows how biology and culture combine to shape what and how we like to eat. She argues, above all, that our tastes are learned behaviors that can be reconfigured—albeit sometimes with difficulty.

How do we relearn to taste? How do we expand our flavor horizons, overcome our disgust of eggs, pickles, sushi, sweetbreads, mayonnaise, or whatever food haunts us? Wilson details a technique developed by Dr. Lucy Cooke, a child psychologist at University College London, called the tiny tastes method. Each day for two weeks, a child agrees to take a very tiny taste, a pea-size amount, of a disliked food. The child does not have to swallow it, just take a lick. Each time the child takes a taste, she gets to put a sticker on her chart. If she does not, it’s no cause for concern, as there is always the next day.

Although developed for children, the method takes advantage of a principle that applies equally well for eaters of any age: with multiple exposures to a flavor, disgust recedes and tolerance increases. The goal is to minimize stress while increasing familiarity. “Eating is a skill that each of us learns,” Wilson writes. “We retain the capacity for learning it, no matter how old we are.” This is a far more subtle, sophisticated, and humane perspective than Theroux’s factoid-based insistence that what we refuse to eat is what we are.