How About Erecting Monuments to the Heroes of Reconstruction?

Americans should build this pivotal post–Civil War era into the new politics of historical memory.1877 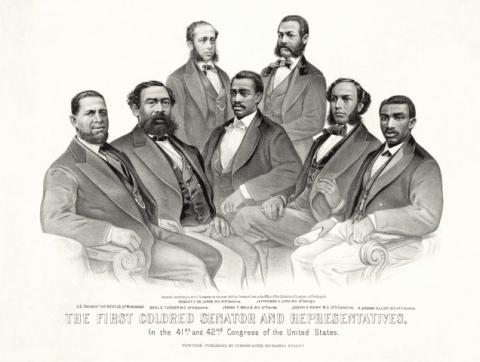 Given the sheer number of Confederate memorials, there is bound to be another shocking flashpoint of the kind that rocked Charlottesville and the nation. Stonewall Jackson and Robert E. Lee have vanished from Baltimore and New Orleans. Chief Justice Roger Taney, who authored the truly infamous part of the Dred Scott decision, is gone from Annapolis. So many have come down—or are up for possible removal—that The New York Times posted an interactive map to chart them all.

The sesquicentennial of Reconstruction is September 1, 2017. Under the First Military Reconstruction Act of March 1867, a Republican-controlled Congress, having become justifiably concerned about profound legal and extra-legal threats to the statutory civil rights of black Southerners, gave the U.S. Army an administrative deadline of September 1 to directly register all black and white adult males in 10 of the 11 ex-Confederate states (Tennessee, the 11th, already had a biracial electorate.) Echoing the Freedom Summer of the civil rights movement, University of Chicago historian Julie Saville has called the summer of 1867 “Registration Summer.”

These elections set in motion deliberations in 1868 about the proper design and structure of new state governments that were designed to be radically more democratic than any of the South’s previous incarnations.

In the fall of 1867, this new biracial electorate elected delegates to state constitutional conventions. These elections set in motion deliberations in 1868 about the proper design and structure of new state governments that were designed to be radically more democratic than any of the South’s previous incarnations. Those state governments were also expected to formally support the 14th Amendment to the Constitution, which established African American citizenship and more broadly a new, expansive view of civil rights.

Americans have been arguing about Reconstruction ever since. Like the republic founded in 1787 in Philadelphia, Registration Summer produced a deeply imperfect political system. The ratification of the 14th Amendment expressly kept all women from voting. Native Americans and Chinese Americans in California soon discovered that the new constitutional amendments—the 13th, 14th, and 15th—did not quite include them (at least not without arduous litigation in the federal courts).

The sesquicentennial of Reconstruction will clock past one anniversary after another, including the insurrection of the Ku Klux Klan against state and local governments run by black officials and white Republican allies; the militant defense of democracy by the Grant administration; and little-known post-Reconstruction anniversaries like the black Exoduster movement to Kansas and black migrations to Oklahoma territory and Liberia. As Americans ponder these milestones, debates over the meanings of these events are certain to follow.

Finding a middle ground will be difficult. The protagonists of the Civil War have always seemed noble. That war seems to have been fought over higher ideals than Americans see in today’s petty political squabbles. As polls show, this is one reason why many Americans remain uneasy about the removal of Confederate monuments.

Reconstruction’s teeming cast of characters, who were busy at party politics, setting and collecting taxes, and executing public contracts, never quite measure up. Moreover, it has taken three-quarters of a century to come to grips with the basic democratic nature of the period. Writing during the Great Depression, W.E.B. Du Bois carefully showed how deeply weird the then-dominant literature on Reconstruction was—he did this at the close of his 1935 masterpiece, Black Reconstruction. The standard view was that it was all a terrible mistake. Du Bois argued, rightly, that it was much more of a triumph than most educated whites understood. In colleges and graduate programs all around the country, people were buying into a racist caricature.

Thanks to that work’s enduring impact, and to the careful work of Du Bois’s great successors, historians John Hope Franklin and C. Vann Woodward, and of their students and successors like Eric Foner, Du Bois’s alternative view—that Reconstruction was a great democratic expansion—has become largely accepted.

The post-bellum system of crop liens (the credit arrangements sorting out who got paid when crops were sold) were fair, labor unions emerged for the first time, the courts were impartial, and police forces were integrated.

There was robust party competition at all levels, from local to state to national electoral politics. The post-bellum system of crop liens (the credit arrangements sorting out who got paid when crops were sold) were fair, labor unions emerged for the first time, the courts were impartial, and police forces were integrated.

Contrary to the oft-asserted statement that Reconstruction was a time of white disenfranchisement, both white and black voters voted at very high rates. The disenfranchisement of major ex-Confederate officeholders was lifted by Congress. This, too, was good for American democracy. But many Americans wonder: If Reconstruction was so great, why did it fall apart so suddenly? However, the premise of the question is wrong.

The post-Reconstruction decades after the 1877 Compromise were much more democratic than is widely known. They certainly featured white-on-black electoral violence, which was also rampant during Reconstruction. There were anti-black electoral fraud and several steps toward legal black disenfranchisement. Yet these years also featured a major biracial party insurgency in Virginia, such as the little-known but important biracial Readjuster movement, and a similar movement about 15 years later in North Carolina in the 1890s. African Americans continued to vote at remarkably high rates during the post-Reconstruction decades and before the onset of black disenfranchisement.

Historians sometimes suggest that post-Reconstruction politics was a charade and point to the violent overthrow of the biracial Populist-Republican fusion government of North Carolina at the end of the 19th century. The idea here is that those who really had political power took the gloves off everywhere in the South and smashed their opposition when they decided that it was finally time to end any prospect of biracial government.

But the North Carolina putsch hardly shows that disenfranchisement swept all at once through the South. Instead, formal legal disenfranchisement was an extended and uncertain process of policy diffusion and change that began in Florida in 1889 and ended in Georgia in 1907, or in Oklahoma in 1910, depending on which definition of the South one uses. The disenfranchisers hardly knew in advance that they would eventually sweep most of these state and local governments away; there was a repeated and strenuous effort to disenfranchise African Americans in Maryland that utterly failed.

Nowhere else in the 19th-century world, in Europe or Latin America, did people who had been in slavery or serfdom shift so rapidly and transformatively into equal and full political, indeed constitution-amending, citizenship.

The most important point is that from 1867 up to the creation of a single-party/single-race rule in the South, the United States was unique: It was the world’s only biracial democratic republic. No other post-emancipation society anywhere ever had a comparable experience—not Cuba or any of the Caribbean slave societies, Brazil, or Russia. Nowhere else in the 19th-century world, in Europe or Latin America, did people who had been in slavery or serfdom shift so rapidly and transformatively into equal and full political, indeed constitution-amending, citizenship. Nowhere else did a myriad of officeholders and national legislators—men who had either themselves been recently enslaved or who, though free-born, had lived and worked previously under a fiercely unequal system—come to play prominent roles in legislation, local courts, and state and local administration.

With Reconstruction, Americans invented a new kind of regime, unique among 19th-century nations. It was profoundly and massively redistributive in a way that the world had never seen up to that point, for it sealed the emancipation of human property and reversed the de-facto re-enslavement of 1866 by the white supremacist governments that President Andrew Johnson created by proclamation during his “presidential Reconstruction.”

Thanks to the long civil rights movement, and to bipartisan action in the 1950s, 1960s, and after, America reinvented the biracial republic in new form, now more multiethnic and, thanks to the impact of the 19th Amendment, much more gender-neutral than the first one. During those decades, Americans grew to see Reconstruction very differently than they did during the heyday of Jim Crow, when Reconstruction was instead widely execrated among whites as a policy disaster.

As the campaign to bring down Confederate monuments shows, many Americans have grown to see the early 20th-century heyday of Confederate commemoration differently. That commemoration was meant to celebrate the final suppression of Reconstruction’s democratic revolution. Commentators regularly point this out. But the next question in the conversation hasn’t happened: You never hear someone on television asking, “Why don’t we commemorate Reconstruction?”

There is an obvious place to start: Congress and the 16 (yes, 16) African American members from that era who served in both the House and Senate. Not a single bust of any one of them can be found in the U.S. Capitol. That should change. They were literally the world’s first black parliamentarians. It is a disgrace that the world’s most powerful legislature has ignored their service.

There are, in fact, many commemorative possibilities. Americans hardly have to mount plaques or build statues for all of them—indeed, so many people merit commemoration that there would be a glut of tributes. But there were thousands of African American office-holders and there were countless events. They are all rich with meaning for understanding a democratic world that in many ways is still lost to us. Recovering and remembering them would certainly help Americans to see their own democracy with new eyes.