The Long Arc of Protest

Successful social movements rarely travel along a linear route toward victory, or a fast one. Even with new digital media, organizing for change requires all the old virtues. 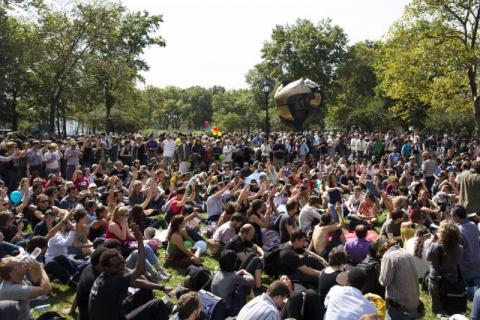 Occupy Wall Street protestors regroup in Battery Park after a morning of marches through the Financial District. ,AP Photo/John Minchillo

Only a few years ago, the prospects for progressive social movements looked more auspicious than they do today. In 2011, aided by new digital technology, massive street protests were on the march from the Arab Spring to the Occupy movement and the takeover of the Wisconsin State Capitol. Digitally organized protests continue in 2017, but the earlier optimism is gone. Authoritarian regimes and civil wars have replaced the revolts of the Arab Spring, right-wing nationalist parties have gained strength across the globe, and the daily excesses of Donald Trump dominate American politics. An iconic sign from the Women’s March in January read: “I can’t believe we still have to protest this crap.”

From where we stand today, history seems more like a drunkard’s aimless stumble than the arc of the universe that Martin Luther King Jr. promised would be long but bend toward justice. No one said that the work of mass social movements would be easy. The bizarre twists of these past few years, however, have left many to wonder whether digitally infused movements are missing some crucial ingredient.

Sociologist Zeynep Tufekci has been observing digital protest since the mid-1990s Zapatista movement in Mexico, and in her book Twitter and Tear Gas, she explores the promise and peril of the new tools available to political activists. Drawing from interviews and firsthand observations among activists who participated in the Arab Spring, Occupy Wall Street, and the 2013 protests against the Turkish government in Istanbul’s Gezi Park, Tufekci ruminates on a central tension between protest action and protest power: On the one hand, digital technologies have made it much easier to spread activist messages, voice dissent, and gather a crowd. The opportunities for mass political action have never been greater or more attainable. One can now accomplish in days what might have taken months or years in a previous era.

But on the other hand, the hard, slow work of mass political action in the past had a generative quality that is being lost. Amid the plodding work of protest-planning, Tufekci argues, activists used to form shared identities and develop political skills. The speed and simplicity of digital tools, in contrast, may not produce that solidarity. As a result, digital media are both a blessing and a curse, resulting in a vibrant digital protest culture that does not necessarily produce an enduring impact.

Tufekci’s core argument echoes an observation by Clay Shirky a dozen years ago, in an essay titled “Exiting Deanspace.” Shirky had been swept up in Howard Dean’s 2004 presidential candidacy. Like many observers, he looked at the massive crowds and record fundraising numbers and believed that they signaled an inevitable victory in the Democratic primaries. After the Dean campaign was scuttled in Iowa and New Hampshire, Shirky realized that his “mental model” had been wrong. “Support isn’t votes … Fervor isn’t votes … Effort isn’t votes … Money isn’t votes. … Sometimes votes aren’t even votes (depending on who’s counting).” The internet, he realized, had lowered the coordination costs for inciting a mass volunteer base. As a result, volunteer enthusiasm provided a weaker indicator of the candidate’s mass appeal than it previously did.

Likewise, Tufekci warns that the effectiveness of social movements cannot be measured through the sheer numbers of people they are able to turn out. Instead, the strongest movements are the ones that develop “narrative capacity,” “disruptive capacity,” or “electoral and/or institutional capacity.” Narrative capacity is the ability to attract public attention and introduce new issues or frames into the political debate. Disruptive capacity is the ability to interrupt the normal workings of political or economic institutions. Electoral capacity is the ability to punish or reward elected officials at the ballot box. Social movement tactics are meant to signal these capacities to governing elites. (Activists do not have to kick all the bums out of office … they simply need to convince elected officials that they could.)

Tufekci is at her finest when discussing the strange, still-emerging technological universe we now inhabit. There is a Tom Friedman–like quality to her writing, as she illustrates her points through globe-traveling personal stories and firsthand accounts. The book includes compelling discussions of the quasi-monopolistic power that Facebook and Google hold in public life. The final chapter on government censorship, surveillance, and misinformation campaigns seems particularly timely in the aftermath of the 2016 election. She also artfully introduces key sociological concepts like technological affordances—the distinctive characteristics of different media that favor some uses over others—to deepen her readers’ understanding. The book reveals both why digital technologies are vital tools for social action and how they create new obstacles to political change.

Tufekci offers one warning to present-day activists that I don’t find wholly convincing. Unlike social movements in the past, she argues, today’s fast-forming, fast-dissolving movements are liable to “tactical freeze,” in which they fail to develop the internal deliberative capacity to shift tactics in response to changing circumstances. She illustrates this possibility with examples from the Turkish protests in Gezi Park and the Occupy movement, both of which had a distinctly anarchist ethos. But other social movements don’t fit this pattern. Digital activist organizations such as MoveOn.org and ColorOfChange.org have demonstrated substantial tactical versatility over the years, relying on a culture of testing and analytics that has helped them adapt to a fast-changing media and political landscape. Similarly, in the 2014 People’s Climate March, which attracted 300,000-plus protesters to New York City just before the U.N. Climate Summit, the convening groups were able to change tactics and shift their focus to increase their impact.

daptation and flexibility are not new challenges for social movements, as Tom Hayden’s book Hell No reminds us. Hayden was a lifelong activist from the early 1960s, when he was president of Students for a Democratic Society, through decades as a leader of the peace movement and other causes. Hell No, published just months after his death last October, serves as a final and forceful act of remembrance and as a lesson about how frustrating, complex, and incomplete social movements are … even when they eventually win.

The movement against the Vietnam War spanned over a dozen years and four presidential administrations. During that time, protest actions became more disruptive and the movement expanded even as it suffered from severe internal divisions. Like today’s digital movements, the Vietnam peace movement leaned heavily on the media of its day. As the war dragged on, the national media slowly turned against it (though never in favor of the protesters). Some of the media affordances of that time helped the antiwar cause. The entire nation “watched the same television news, and began to question the official propaganda. … Everyone was equally lied to.” But in other respects, the media technology of the time was limiting. In 1962, Hayden and his fellow SDS leaders issued the “Port Huron Statement,” a manifesto that would come to be seen as marking the birth of the New Left of the 1960s. But it was originally mailed, he recalls, to only about 65 people. Movement-building was slow and arduous. The strategic capacity that Tufekci credits to pre-digital movements was fleeting and sometimes wholly absent.

But the peace movement persevered and adapted, displaying all the capacities that Tufekci enumerates—narrative, disruptive, and electoral—though never at the scale necessary to stop the war. Instead, the movement had to capitalize on broader social forces as they emerged. Hayden repeatedly mentions the crucial work of Vietnam veterans who opposed the war once they returned home. The war itself produced disillusionment and social friction, and the strategic challenge for the movement was capturing the energy from that friction and turning it toward politics. Take away the draft, and you have a weaker social movement. Take away the military failures, and you have a weaker movement. But take away the movement itself, and you have dramatically different government policies. Movements often affect history in ways that go uncredited.

What, then, do these two authors tell us about our current wave of protest movements? From Tufekci, the reader can garner a clear sense of how digital technologies help and hinder social movement activists. From Hayden, the reader is left with a sense of historical perspective. The failings and limitations of Occupy in 2011 and Gezi Park in 2013 were not so different from those of the Vietnam War peace movement in 1968 or 1971. Tufekci is right to warn that social movements must develop the strategic capacity to learn and adjust to changing circumstances. But, as Hayden reminds us, the tactical insights of past movements came slowly and were accompanied by many missteps.

Indeed, there is reason to believe that the strength of today’s protest movements comes from exactly the sort of tactical learning Tufekci suggests is necessary. The founders of the Black Lives Matter movement clearly paid close attention to the limitations of the Occupy movement, developed a strategic critique, and adapted new political strategies as a result. The anti-Trump efforts staged by the Indivisible movement have borrowed from the Tea Party’s most successful tactics. Successful social movements rarely travel along a linear route toward victory, or a fast one. Even with new digital media, organizing for change requires all the old virtues.

David Karpf is the author of The MoveOn Effect: The Unexpected Transformation of American Political Advocacy andAnalytic Activism: Digital Listening and the New Political Strategy. He is an associate professor in George Washington University’s School of Media & Public Affairs.

This article appears in the Summer 2017 issue of The American Prospect. Subscribe here.