We Can See Clearer Now, As Hurricane Irma Proves

In the past, catastrophic storms like Hurricane Irma might strike almost without warning. Now we can track them in staggering detail. 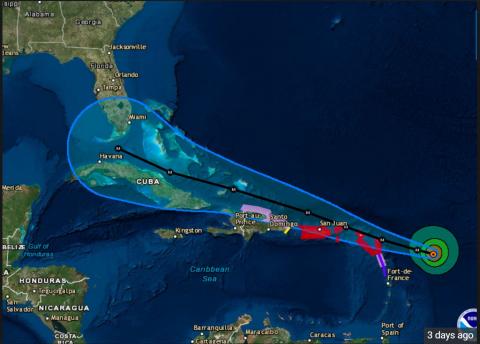 By Wednesday of last week, even as

continued to rain devastation on the Gulf Coast, a new storm, Irma, was taking shape in the eastern Atlantic. Within thirty-six hours, it had morphed into a Category 3 hurricane. Then it seemed to hesitate momentarily, as if to gather itself. “Irma has begun a cycle of reorganization called an eye-wall replacement,” the Weather Channel reported on Friday. This brought to mind something like a home-renovation project, but in practice the replacement cycle is more like mounting a Formula One engine in a Corvette. The eye of a hurricane acts like a chimney, sending warm air whirling into the upper atmosphere. It may hold stable for a while, but eventually it shrinks and sputters, often to be replaced by a larger and more powerful eye, which forms around it. Then the storm hits fifth gear.

Yesterday morning, Irma indeed achieved Category 5 status, with winds of a hundred and eighty-five miles per hour, ranking it among the most powerful Atlantic hurricanes in recorded history. (The strongest, Hurricane Allen, in 1980, had wind speeds of a hundred and ninety miles per hour.) By the afternoon, Irma was expected to exceed the theoretical maximum intensity for such a storm, with winds of more than two hundred miles per hour. The odds of it hitting the mainland U.S. were still deemed slightly higher than fifty-fifty, but Puerto Rico and the Leeward Islands were bracing for a direct hit. “If you’re in Irma’s path, this is a worst-case scenario,” the meteorologist Eric Holthaus tweeted. “You’ve never experienced a hurricane like this. Stronger than Andrew or Katrina.” Taylor Trogdon, a senior scientist at the National Hurricane Center’s Storm Surge Unit, tweeted, “I am at a complete and utter loss for words looking at Irma’s appearance on satellite imagery.”

The arrival of two record-breaking storms in one season, along with the blistering temperatures out West, will no doubt renew the urgent discussion of Earth’s changing climate, as it should. But, as this next blow falls, it’s worth pausing to appreciate the supreme human accomplishment that modern weather prediction has become. In 1900, the worst natural disaster in U.S. history hit Galveston, Texas, in the form of a Category 4 hurricane. The city was completely destroyed and some eight thousand people—twenty per cent of the population—died, in no small part because they were warned of the storm just the day before. In contrast, the modern residents of Texas watched Harvey churn toward them for nearly a week before it struck, causing some sixty deaths. Thanks to accurate forecasting, Puerto Rico was able to declare a state of emergency two days before Irma hit. Still, even the best preparation cannot blunt all the effects of a monster storm. The director of the Puerto Rico Electric Power Authority, which oversees the island’s aging electrical infrastructure, has already predicted blackouts of as long as six months in some areas. On Wednesday, the initial reports from Barbuda, one of the first Caribbean islands to feel Irma’s effects, were grim—ninety per cent of all structures had been destroyed—and parts of South Florida were under evacuation orders.

In 2015, a paper in Nature titled “The Quiet Revolution of Numerical Weather Prediction” noted that, in the past forty years, the accuracy of three- to ten-day forecasts has been increasing by about one day per decade. “Today’s six-day forecast is as accurate as the five-day forecast ten years ago,” the authors, led by Peter Bauer, a scientist with the European Centre for Medium-Range Weather Forecasts, noted. The growth and path of Hurricane Sandy, in October of 2012, were accurately predicted eight days in advance, and both the 2010 Russian heat wave and the 2013 U.S. cold spell were foretold at least a week ahead of time. Last Tuesday, much was made of the fact that a satellite map of rainfall estimates in the Houston area required two new colors to represent the tremendous amount of rain—between forty and sixty inches—that was expected. But no less astonishing, in the end, was the map’s pinpoint accuracy.

All of this is thanks to the armada of satellites and instruments that now orbits the planet, marking Earth’s every shift and exhalation and returning a torrent of data to us on the surface. Followers of the Weather Channel or the N.H.C.’s Twitter feed have grown accustomed to consuming visual data—those rainfall maps are the output of nasa’s Global Precipitation Measurement mission—but it’s unlikely that they grasp the scale of the enterprise. Among the dozens of Earth-observing satellites, belonging to various nations, are several used exclusively for weather forecasting. These include four geostationary satellites, goes-13 through goes-16, which sit high above Earth and monitor the planet as it rotates below. Five more orbit the poles every ninety minutes, monitoring a fresh north-south swath of Earth with each passage—“like peeling an orange,” as Florence Rabier, the director general of the European Centre for Medium-Range Weather Forecasts, described it to me.

“Numerical weather prediction is dependent on these satellites,” Cliff Mass, a meteorologist in Seattle, told me. “They’re part of the secret sauce of why it’s become so successful.” goes-16 was launched by the National Oceanic and Atmospheric Administration in November and went online in January; though the data and imagery it sends back are marked “preliminary” and “non-operational,” the information is so breathtaking that noaa can’t help but show it off anyway. The ability to accurately predict the wind speed of mid-ocean hurricanes comes, in part, from the Cyclone Global Navigation Satellite System, or cygnss, an array of eight small satellites launched last year by nasa. These detect the signals sent between G.P.S. satellites and measure how they’re scattered off the ocean—a proxy for surface roughness and, by extension, wind speeds.

All this data is fed into forecasting models of staggering power and elegance. They essentially divide the atmosphere into millions of cubes, several miles on a side, each filled with a wealth of known data—temperature, humidity, wind speed, and more. Then the laws of physics are set loose, and changes in the atmosphere are simulated in three dimensions. For a long time, the U.S. model, known at the Global Forecast System, was the top of the line, but it is increasingly being surpassed by the European Centre’s higher-resolution model, based in Reading, England. (The European model accurately forecast the final landfall for Sandy, while the G.F.S. was off by several miles.) “It’s almost like a cat scan of the atmosphere,” Mass said.

As a thinking species, humans tend to assume that the main advantage of having a brain is the ability to, well, think. But the real advantage—not only for us but up and down the evolutionary line—is that it allows us to predict. Neurobiologists sometimes describe the brain as a prediction machine, or even a time machine: with its five senses, it is continuously observing its surroundings, laying down memories, and reviewing what just happened in order to forecast what might happen next. Numerical weather prediction provides an analogous sort of cognition for the planet as a whole. Bauer and his colleagues, in their Nature paper, compare the endeavor to “simulating the neurological connectivity of the human brain or the evolution of the galaxies in the cosmos.” Mass said, “Weather-prediction systems are probably the most complex systems our species has put together. They’re extraordinary, one of mankind’s greatest creations; we’re simulating from the atomic scale to the planetary scale.” And with few exceptions, he added, countries freely share their meteorological data. “It’s the one thing our species does together,” he said.

An optimistic forecast would see this monitoring system continue to get smarter as it absorbs more weather variables, gathered by newer satellites and instruments, measured in finer resolution, processed with ever more powerful supercomputers. But the system will still require humans to watch over it, and in the United States that is no longer a given. Nine months into Donald Trump’s Presidency, the National Hurricane Center lacks a director, as does its parent agency, noaa. (nasa has no administrator, either; Trump’s candidate, Jim Bridenstine, a Republican Congressman from Oklahoma, has no scientific qualifications to speak of and has responded coyly to questions about climate change.) noaa’s budget summary for 2018 includes a five-million-dollar cut in funding for numerical weather prediction, “to slow the transition of advanced modeling research into operations for improved warnings and forecasts.” Dense fog, it seems, is this Administration’s weather of choice. We need sunlight and a good breeze off the ocean, and fast.

Alan Burdick, a staff writer, joined The New Yorker in 2012. He is the author, most recently, of “Why Time Flies: A Mostly Scientific Investigation.”