From Louis Armstrong to the N.F.L.: Ungrateful as the New Uppity

Trump, we will assuredly understand, is a small man with a fetish for the symbols of democracy and a bottomless hostility for the actual practice of it. 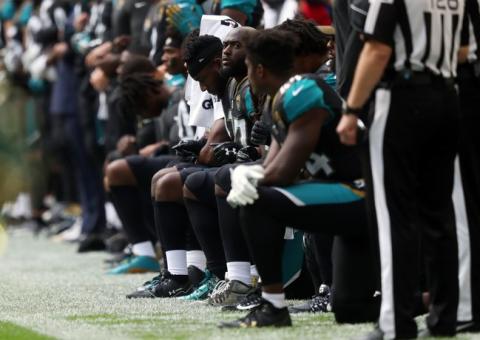 Trump’s invective toward N.F.L. players who kneel during the national anthem (such as members of the Jacksonville Jaguars, above) highlights the racially charged demands facing black entertainers., Simon Cooper / PA Images via Getty

Sixty years ago, Central High School in Little Rock, Arkansas, became a flashpoint in the nascent civil-rights movement when Governor Orval Faubus refused to abide by the Supreme Court decision in Brown v. Board of Education. Faubus famously deployed the state’s National Guard to prevent nine African-American students from attending classes at the high school. In the midst of the crisis, a high-school journalist interviewing Louis Armstrong about an upcoming tour asked the musician about his thoughts on the situation, prompting Armstrong to refer to the Arkansas governor as several varieties of “motherfucker.” (In the interest of finding a printable quote, his label for Faubus was changed to “ignorant plowboy.”) Armstrong, who was scheduled to perform in the Soviet Union as a cultural ambassador on behalf of the State Department, cancelled the tour—a display of dissent that earned him the scorn and contempt of legions of whites, shocked by the trumpeter’s apparent lack of patriotism. As the historian Penny Von Eschen notes in “Satchmo Blows Up the World,” a history of the American usage of black culture as a tool of the Cold War, students at the University of Arkansas accused Armstrong of “creating an issue where there was none,” and joined the procession of groups cancelling Armstrong’s scheduled concerts.

The free-range lunacy of Donald Trump’s speech on Friday night in Alabama, where he referred to Colin Kaepernick—and other N.F.L. players who silently protest police brutality—as a “son of a bitch,” and of the subsequent Twitter tantrums in which the President, like a truculent six-year-old, disinvited the Golden State Warriors from a White House visit, illustrates that the passage of six decades has not dimmed this dynamic confronted by Armstrong, or by any prominent black person tasked with the entertainment of millions of white ones. There again is the presence of outrage for events that should shock the conscience, and the reality of people who sincerely believe, or who have at least convincingly lied to themselves, that dissenters are creating an issue where there is none. Kaepernick began his silent, kneeling protest at the beginning of last season, not as an assault against the United States military or the flag but as a dissent against a system that has, with a great degree of consistency, failed to hold accountable police who kill unarmed citizens. Since he did this, forty-one unarmed individuals have been fatally shot by police in the United States, twelve of them African-American, according to a database maintained by the Washington Post. The city of St. Louis recently witnessed three days of protests after the acquittal of Jason Stockley, the former officer who, while still working for the city’s police force, fatally shot Anthony Smith, an eighteen-year-old African-American motorist who had led officers on a chase. Stockley emerged from his vehicle, having declared that he would “kill the motherfucker,” then proceeded to fire five rounds into the car. Later, a firearm was found on the seat of Smith’s car, but the weapon bore only Stockley’s DNA. The issue is not imaginary.

Yet the belief endures, from Armstrong’s time and before, that visible, affluent African-Americans entertainers are obliged to adopt a pose of ceaseless gratitude—appreciation for the waiver that spared them the low status of so many others of their kind. Stevie Wonder began a performance in Central Park last night by taking a knee, prompting Congressman Joe Walsh to tweet that Wonder was “another ungrateful black multi-millionaire.” Ungrateful is the new uppity. Trump’s supporters, by a twenty-four-point margin, agree with the idea that most Americans have not got as much as they deserve—though they overwhelmingly withhold the right to that sentiment from African-Americans. Thus, the wonder is not the unhinged behavior of this weekend but rather that it took Trump so long to exploit a target as rich in potential racial resentment as wealthy black athletes who have the temerity to believe in the First Amendment.

It’s impossible not to be struck by Trump’s selective patriotism. It drives him to curse at black football players but leaves him struggling to create false equivalence between Nazis and anti-Fascists in Charlottesville. It inspires a barely containable contempt for Muslims and immigrants but leaves him mute in the face of Russian election intervention. He cannot tolerate the dissent against literal flag-waving but screams indignation at the thought of removing monuments to the Confederacy, which attempted to revoke the authority symbolized by that same flag. He is the vector of the racial id of the class of Americans who sent death threats to Louis Armstrong, the people who necessitated the presence of a newly federalized National Guard to defend black students seeking to integrate a public school. He contains multitudes—all of them dangerously ignorant.

It has been convenient and politically profitable for Trump to paint the black athletes’ protests as an inane attack upon the symbols of the United States, but he is deeply implicated, and is increasingly aggravating the actual cause of this discord. It was Trump who urged police officers in Brentwood, New York, to treat the suspects in their charge with casual brutality. Trump’s Department of Justice has overseen the dismantling of the community-policing initiative, which was meant to encourage greater rapport between law enforcement and the neighborhoods they patrol. It is the President’s D.O.J. that has displayed disdain for the federal consent decrees that had been used to reform dysfunctional police departments.

A week and a half ago, Sarah Huckabee Sanders, the White House press secretary, assailed the black ESPN journalist Jemele Hill for referring to Trump on Twitter as an “ignorant white supremacist.” She asserted that Hill’s tweets were a “fireable offense.” Several days later, Trump attacked the sports network on Twitter and demanded that it “apologize for untruth.” After Trump rescinded his White House invitation to the Golden State Warriors, Hill tweeted, “Hey @stephencurry30, welcome to the club, bro.” LeBron James tweeted that Trump was a “bum”—which inspired criticism that he had crossed a line. (James was, it should be noted, considerably kinder than Louis Armstrong might have been.) The club of Trump dissidents grew larger on Sunday, when dozens of players from the Baltimore Ravens and the Jacksonville Jaguars took a knee, and Shad Khan, the owner of the Jaguars, locked arms with players and coaches who remained standing during the national anthem. All but one of the Pittsburgh Steelers opted to remain in their locker room during the playing of the national anthem ahead of their game against the Chicago Bears. Both the Seattle Seahawks and the Tennessee Titans decided to do the same for their game. If Trump’s intention was to stigmatize such displays, his words have had the opposite effect. He is perhaps the greatest example of the law of unintended consequences this side of the Darwin Awards.

Amid Trump’s nuclear brinksmanship and social-media provocation toward North Korea, amid the swollen gorges of water streaming through Puerto Rico, amid the craven and indefensible attempts to gut health care, amid the slower-moving crises of voting access, economic inequality, and climate change—amid all these things, Trump yet again found a novel way to diminish the nation he purportedly leads. He has authored danger in more ways than there are novel ways to denounce it. This is his singular genius. When this moment has elapsed, when some inevitably unsatisfactory punctuation has concluded the Trump era, we will be left with an infinitude of questions. But Trump, we will assuredly understand, is a small man with a fetish for the symbols of democracy and a bottomless hostility for the actual practice of it.

Jelani Cobb has been contributing to The New Yorker since 2012, and became a staff writer in 2015. He writes frequently about race, politics, history, and culture. His most recent book is “The Substance of Hope: Barack Obama and the Paradox of Progress.” He’s a professor of journalism at Columbia University. He won the 2015 Sidney Hillman Prize for Opinion and Analysis Journalism, for his columns on race, the police, and injustice.