Puerto Rico’s struggle to rebuild after Hurricanes Irma and Maria is being made harder by its own government, and an indifferent White House 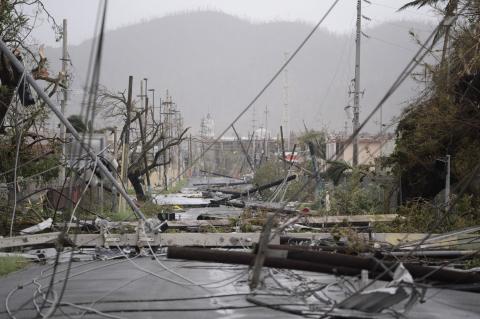 During an emotional interview, San Juan’s mayor, Carmen Yulín Cruz, implored those watching: “Do not forget us and do not make us feel alone.” The anxiety in her voice was palpable. It spoke to the concern shared by millions of Puerto Ricans that the long road to recovery from Hurricanes Irma and Maria might be a solitary one.

The decisions made in this moment will have far-reaching implications for Puerto Rico’s future and will shape the daily lives of residents for years to come. As efforts to restore power, potable water, and communication are under way, we must push for a recovery plan that does not exacerbate the already stark inequalities that exist within Puerto Rican society or between Puerto Rico and the rest of the United States.

While the Junta has authorized $1bn to go towards emergency relief efforts, this number is nowhere near the amount it will take for Puerto Ricans to rebuild. All decisions regarding how Puerto Rico’s infrastructure will be rebuilt will have to be made in consultation with and approved by the Junta, which, ultimately, is in place to make sure Puerto Rico’s debt is serviced.

There is fear that the Junta will only allow funds to go towards recovery efforts that allow bondholders to be paid back. Members of the Junta have already been promoting the privatization of Puerto Rico’s infrastructure for some time now, especially its electrical utility company, Prepa, and many feel that the deadly blow dealt by Maria could facilitate privatization efforts that many Puerto Ricans oppose.

There is also concern that the dictates of the Junta to generate economic growth in order to service the debt could lead to recovery efforts being concentrated in Puerto Rico’s tourist sector at the expense of the rest of the territory. Following catastrophic weather events, San Juan, as the capital city and a major tourist destination, tends to receive greater attention during recovery efforts.

The Junta’s myopic emphasis on restoring economic growth as quickly as possible promises to further exacerbate what will already be an uneven distribution of funds, effort and attention. In such a scenario, Puerto Rico’s low-income, immigrant, and racially marginalized communities that lie off the well-beaten tourist path will undoubtedly suffer.

The White House has announced that it does not intend to request aid for Puerto Rico from Congress until the first or second week of October. This is in stark contrast to the $15.25bn quickly authorized by Congress to aid Texas following Hurricane Harvey.

There is doubt that Puerto Rico will receive a relief package of that size. Further, President Trump said in a series of tweets on Monday that while Puerto Rico “is in deep trouble”, the billions owed to Wall Street must be dealt with. This cruel commitment to profits over people will likely result in more desperation in Puerto Rico.

Congress has the ability to alleviate Puerto Rico’s woes by placing a moratorium on Puerto Rico’s debt payments or even abolishing the debt in whole or in part. Congress also has the power to permanently eliminate, or at the very least apply a temporary waiver to, the Jones Act, which mandates that all goods being transported to Puerto Rico use US-built, owned, and operated vessels, even when more affordable options exist.

The recent decision not to lift the restriction, even temporarily, will keep Puerto Ricans from receiving the necessary food, water, medicine and fuel they so urgently need.

Although the full scope of Irma and Maria’s combined damage will not be known until lines of communication are fully re-established, it is clear that the road to recovery will be long and arduous. Puerto Rico deserves a just recovery for all of its residents. We must ensure that colonial strictures – and the desire to appease Wall Street – do not get in the way of that.

Marisol LeBrón is an assistant professor of American Studies at Dickinson College. She is one of the creators of the Puerto Rico Syllabus, a digital project about the Puerto Rican debt crisis.