books If He Hollers, Let Him Be; He's Chester B. Himes

A hard look at African-American author Chester Himes, whose literary fame and financial success later in life hardly made up for the oppressive racial travails that preceded it and forced him to live much of that life abroad. 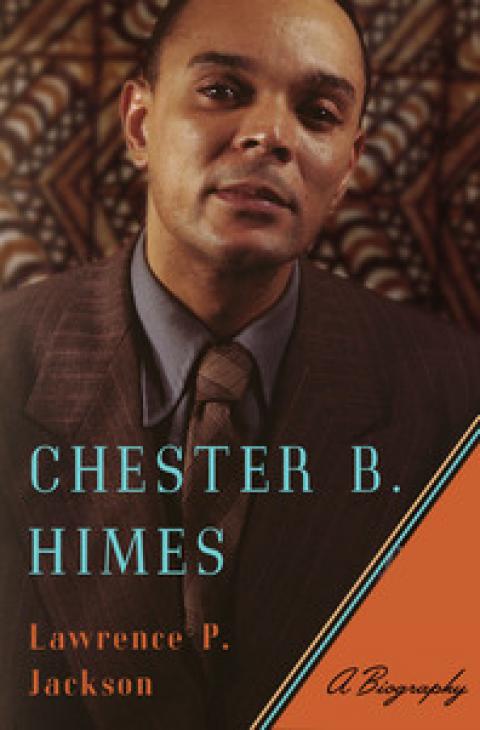 Lawrence P. Jackson’s sad biography of Chester B. Himes (born in 1909) is exhaustively researched and detailed and—in almost every way—a tragic account of an African American writer’s attempt and largely failure to become a successful writer in the United States, while attacking many of the norms of white middle-class morality. Beginning with the publication of his first novel, If He Hollers Let Him Go (1945), Himes repeatedly depicted black men seducing white women—an issue so fraught with emotional terror for white readers—that Himes didn’t have a chance to have his work widely published or read. Worse, Himes appears to have delighted in offending white readers, editors, and publishers, who rarely treated him well, because his anger was never in short display. In his prologue, Jackson observes of him, “He specialized in biting the hand that fed him….” Other African American writers of his time (think of Richard Wright, especially) encountered obstacles in publishing, but were more successful in discovering ways to be accommodating. Himes would not and paid a decades-long price for his anger.

It didn’t need to be this way; it started rather well. Hines’ background was as close to black middle class as possible. Both parents were educators, teaching in black colleges in the Mid-west and the South. He grew up with better opportunities than most African Americans of the time, attending Ohio State University briefly in 1926. But he appears to have been more interested in sex and getting high than his studies. Before he was twenty, he had contracted VD, wasted time gambling and drinking, which led to hard drugs and armed robbery, after getting a girlfriend pregnant. At nineteen, he was sentenced to a minimum of twenty years in prison. He was incarcerated in the segregated Ohio state penitentiary in Columbus. Jackson writes of him after a riot in the prison, “His efforts to deal with the personal tragedy of incarceration, loneliness, physical vulnerability, the conflict of homosexual desire, and the gruesome slush of human entrails in the [prison] yard during the long night of April 21 launched his writing career.” That was in 1930.

He managed to buy a typewriter with his gambling profits, and he began writing short stories. By 1933, he was publishing stories is fairly respectable literary outlets, including one in Esquire, in 1934, most of them about prison life or black/white sexual encounters. In 1936, after eight years in prison, he was paroled. Living was difficult because of the Depression, and he survived for a time by working for the WPA. He also married a black woman who brought in significant though sometimes erratic income. Stories and novels flowed quickly, even profusely. The two of them moved around, including to LA, where Himes hoped to be successful writing for Hollywood. But that did not happen. There was also a lengthy involvement with the Communist Party, ending because of his difficulty accepting the Party Line. In 1944, he successfully applied for and was awarded a Rosenwald fellowship, which made it possible to be a full-time writer for the first time since his prison days.

Himes and Ruth, his wife, moved to New York. Doubleday accepted If He Hollers Let Him Go and then spent months butchering the novel before releasing it. The book (which depicts an explosive relationship between a black man and a white woman) was published in 1945, by which time Himes had developed friendships with Richard Wright and numerous other black artists. Reviews of the novel were mostly nasty, but he persisted with novel after novel, accumulating agents and publishers along the way, and many other friends who were black writers. He spent some time at Yaddo, mostly drunk. Often, after he had spent the latest royalty check, the only jobs he could find were custodial. There were tensions with other writers (including Ralph Ellison) because their successes overshadowed his own. After the war, which he had been able to avoid, he decided to go to Europe and, once again, try to become a successful writer. Jackson’s title for the chapter about these years (1948-1952) is “Inflicting a Wound upon Himself,” and it pretty much nails Himes self-destructive character.

The first European trip was brief compared later ones. Back in the United States, he was desperate much of the time, trying to get advances for work from numerous publishers. Finally, a second book, Cast the First Stone, was accepted, a novel he had worked on for fifteen years. As soon as he received the advance, he remarked, “The first thing I desired now that I had money was to sleep with a white woman….” When Ralph Ellison, published Invisible Man (1952), Himes’ jealousy increased. In 1953, he returned to Europe, to Paris, where he would remain for much of the rest of his life. His biographer observes, “He left America ‘just to stay alive.’” (Wright was also in Paris).

There was a string of white women he would become involved with, often much younger than he, although he was still married to Jean because he didn’t have enough money to pay for a divorce. This is Himes’s observation about his depiction of black/white sexuality: “…the black American male is a handful of psychotic entanglements such as has never before existed. He’s a kind of social bastard, crushed by the vulgarity and immorality produced by our time. And there you have it, what the woman takes for a primitive.” By 1955, other novels had been accepted and the paperback royalties for reprints in the United States had significantly improved, but money problems often returned. There’s a reference to Himes and his current mistress trying to survive (in Paris) on dog food.

Finally, there is significant financial change, mostly because Himes began writing comic detective stories, set in Harlem. He created a number of popular characters, including Coffin Ed Johnson and Grave Digger Jones. These novels, written in English, had to be translated into French, but by the end of the decade Himes’ popularity had considerably risen in France. Eventually it would surpass Richard Wright’s. Titles such as The Real Cool Killers, Pinktoes, and Cotton Comes to Harlem not only brought him additional income but, in time, popularity with American readers. As a black expatriate living in Paris, he gained a certain stature, and the friendships of many black intellectuals, including James Baldwin and Malcolm X. Younger black writers began to seek Himes out.

In the 1960s when he enjoyed more success than ever before, there were also setbacks. He had a stroke in 1963, when he was visiting Mexico. The rise of Black Power in the United States also increased his fame. Himes could not remain silent about what was happening. He expressed his contempt for racism in the West (including in France) in essays published during the era. By 1964, there were multiple paperback reprints of his books by American publishers. Himes’ rage fit in with the times, the unrest in the United States and other places. Carlos Moore, a friend of his, said about Himes in the context of race riots and assassinations of American black leaders: “Chester was a very bitter, bitter, bitter person.” There was plenty of justification for his anger.

As the decade came to a close, his finances were in better shape than ever been. He spent several years in Spain, though he traveled increasingly. And there were additional health problems, including arthritis and problems with his teeth. His writings were often cited when there was racial unrest in the United States. About the Newark riots (1967), he observed, “The theory has always been that the way to treat black people is like children; that they have to be punished when they misbehave and make a nuisance of themselves such as asking for civil rights.” His anger at racism in the United States, especially, was eloquently expressed in these essays, perhaps more powerfully than in his novels. Still, there were serious questions about Himes’ depiction of black life and what he wrote in his detective stories about Harlem. One reviewer wrote, “His Harlem blacks look and sound like the kind of idiots and psychopaths and punks a white man of similar background might think them all to be.”

Then the end arrived, after movies were made of his Harlem novels and the first volume of his autobiography, The Quality of Hurt (1976), was published. It wasn’t until 1978 that Himes divorced Jean because he was worried that the royalties from his work, after he died, would all go to her. He married Leslie Packard, the woman he had lived with during his declining years so that his estate would go to her. He died in 1984, following a second stroke. Two years earlier, his friend, Ishmael Reed, was successful in seeing that Himes was awarded the American Book Award for Lifetime Achievement.

Lawrence P. Jackson’s account of Chester B. Himes’ life is sometimes overly detailed, beginning with lengthy information about his parents and grandparents. I’ve often felt that contemporary biographers feel compelled to write stuffed accounts of their subject’s lives, assuming that the length will support their assumptions of their subject’s greatness. Himes, for me, has always been a second-tier novelist, though I would be the first to say that no writer should be forced to undergo so many of the humiliations as he did in getting published. He was certainly a fighter and a survivor, but often a rather nasty person, given to petty jealousies and not the best treatment of women. I confess I don’t understand why the women he lived with didn’t simply pack up and leave, though some of them did. The test for me of a biography of a writer is whether it compels me to return to that writer and re-read the books I first experienced years ago or some of the works I have never read. That compulsion was missing by the time I finished Chester B. Himes, yet I have to admire Jackson’s diligence.

Book author Lawrence P. Jackson is Bloomberg Distinguished Professor of English and History at Johns Hopkins University. Author of Ralph Ellison: Emergence of Genius, The Indignant Generation, and My Father’s Name, he has been published in n+1 and Harper’s. He lives in Baltimore, Maryland.

[Essayist Charles R. Larson is Emeritus Professor of Literature at American University, in Washington, D.C. and a frequent reviewer for Counterpunch.]