Some critical prescription drugs are only made on the island, and Hurricane Maria halted production at dozens of pharmaceutical factories. 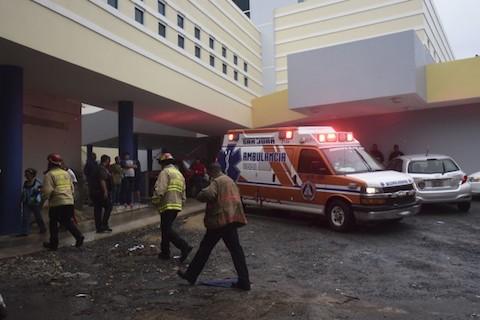 Firefighters arrive at a hospital in Rio Piedras after the failure of the electrical plant in San Juan on September 30, 2017., (AP Photo/Carlos Giusti)

Before he gained acclaim for standing up to Google—losing his position at a think tank as a result—the Open Markets Institute’s Barry Lynn had carved a niche as a lonely voice speaking out about fragile global supply chains. His 2006 book End of the Line begins with the story of a deadly 1999 earthquake in Taiwan that shut down so many critical semiconductor factories that practically the entire manufacturing sector for consumer electronics temporarily seized up.

When globalization opened up markets around the world, companies sought cheap labor to manufacture their goods. This combined with a revolution in just-in-time logistics to centralize production in specific locations, making supplies of virtually everything we rely on more exposed to unforeseen events. Because Lynn was, well, a lonely voice, this man-made danger never got sufficient attention. But a nightmare scenario stemming from supply chain fragility is playing out right now in Puerto Rico.

The island’s near-destruction from two hurricanes has triggered a humanitarian crisis in a territory already ravaged by economic depression and austerity. But it’s also savaged one of the island’s few bright spots amid a decade of disaster: its robust medical manufacturing sector. The future of those plants is uncertain, so the problems related to a single weather event’s devastation could spread across America, causing severe prescription drug and medical supply shortages.

Puerto Rico’s crisis, in other words, could morph into a national public health crisis.

There are several reasons for this, but the biggest is that the United States doesn’t build into national supply chains the kind of redundancy that would prevent this type of vulnerability. Maybe the Puerto Rican disaster will provide a wake-up call.

Puerto Rico’s manufacturing sector used to be far more expansive. Section 936 of the tax code shielded income originating in Puerto Rico from taxation, and pharmaceutical companies in particular took advantage. When President Clinton initiated a ten-year phase-out of Section 936 in 1996, PhRMA, the industry trade lobby, was the first to speak out in opposition.

With no economic stimulus replacing Section 936, Puerto Rico has experienced negative growth virtually every year since the phase-out ended in 2006. Yet many pharmaceutical companies stayed. The supply lines were already in place, and local incentives along with low labor costs still made Puerto Rico attractive. Pfizer, Amgen, Eli Lilly, Johnson & Johnson, and AstraZeneca are among major manufacturers on the island, employing around 90,000 Puerto Ricans in a $15 billion industry. Nearly three-quarters of all Puerto Rican exports are pharmaceuticals and medical supplies.

Hurricane Maria brought an abrupt halt to production at 50 pharmaceutical factories. While most plants were not actually badly damaged, the destruction of the electric grid meant they could not function without generators. Getting the fuel necessary to keep the generators running has proven challenging, given the debris blocking roads. These emergency systems were not designed to supply power for months. Any break in capacity could be disastrous; no electricity equals no refrigeration, which is vitally necessary for stockpiling prescription drugs.

Even if generator fuel gets to the factories, workers themselves often cannot, preoccupied as they are with locating clean water, taking care of their families, and rebuilding their lives. Companies are having trouble even finding their workers amid a virtual telecommunications blackout; they’ve taken out radio ads asking them to call in. Relief efforts have centered on feeding and sheltering the citizens of Puerto Rico, not getting workers back to factories.

According to the Food and Drug Administration, 13 critical drugs are made only in Puerto Rico. And the country could see a shortage of 40 drugs in all after the decline in production at factories on the island. These shortages could affect treatments for rheumatoid arthritis, childhood leukemia, strokes, cancer, and the HIV virus. (At least we think so; drug companies consider their manufacturing sites a trade secret and don’t typically disclose the locations to the public.)

“These are critical medicines: These are not drugs for which there are therapeutic substitutes,” FDA Commissioner Scott Gottlieb told reporters last Friday. He warned Congress this week that the situation could blossom into a full-blown public health emergency.

Another 30 Puerto Rican plants manufacture medical devices and supplies. Baxter International has already warned that lost production days have led to delays in shipments of dextrose and sodium chloride—saline, used for cleaning wounds, treating dehydration, and diluting medications. The saline that Baxter manufactures in Puerto Rico ships in small bags, and is mainly used for mixing with medications.

In other words, one hurricane is preventing hospitals from getting a solution of salt and water, something that covers roughly 70 percent of the Earth.

These types of shortages are nothing new. The Justice Department has been investigating Baxter since May for colluding with the small group of saline solution producers to fix prices by creating artificial shortages. Prices have increased between 200 percent and 300 percent since 2013. Methotrexate, the leukemia drug, has experienced dire shortages in the recent past. The FDA has an entire website dedicated to drug shortages.

It would not take much effort to ramp up global production. At the least, no drug or simple solution like saline should be so reliant on a single manufacturing facility. But rigid patent monopolies in the United States prevent diverse sources of production. “We make it unnecessarily difficult to import foreign drugs, because the industry wants it to appear as though there are genuine safety concerns in objecting to imports of brand drugs at lower prices,” says economist Dean Baker of the Center for Economic and Policy Research.

That restricts U.S. drug manufacturing, as does the logistical wizardry that centralizes production, often in sole-source facilities. This practice is supposed to create efficiency, with just-in-time shipping ensuring distribution. Algorithms and spreadsheets make sure manufacturers make just enough of a product to satisfy demand. But when a hurricane batters a single facility supplying life-saving medications, suddenly trust in that supply chain looks misplaced.

If the United States had more companies competing to produce generic versions of prescription drugs, Americans wouldn’t be as reliant on sole-source facilities in areas with cheap labor, controlled by a single monopolist. The government actually has the legal right to commandeer drug patents, particularly in the event of a shortage, to ensure patient access at a reasonable price. But this power is rarely used, and likely has never been used to solve a persistent logistical problem.

In the endless drive for profit., modern American capitalism builds in vulnerabilities that should not exist. The country has laws to tear down the structures that threaten long-term security for no reason other than the balance sheet, whether by wresting away patents or busting up monopolies. But instead of curbing these tendencies, companies turn abundance into scarcity.