With the GOP running the White House and Congress, membership in federal unions is on the rise, fed by an administration and legislature that leaves the workforce anxious about budget cuts, layoffs and an erosion of civil service protections. 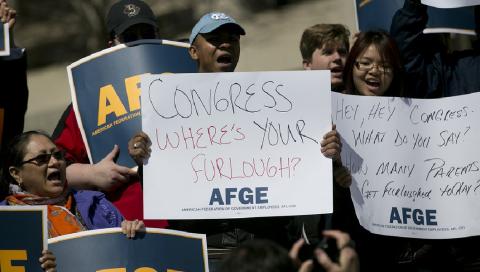 Congress members and unions rally in favor of federal workers.,
President Trump and Capitol Hill Republicans have been good for federal unions, even as they attempt to undermine the labor organizations and the public servants they represent.
With the GOP running the White House and Congress, membership in federal unions is on the rise, fed by an administration and legislature that leaves the workforce anxious about budget cuts, layoffs and an erosion of civil service protections.
The American Federation of Government Employees (AFGE), the biggest federal employee union, had a net increase of 1,022 members last month alone, part of almost 5,000 new members since January. Three of the four other major unions also reported growth — the National Treasury Employees Union (NTEU) did not provide membership information  —  with the National Federation of Federal Employees on pace to achieve 7 percent growth this year.
While membership has grown previously, important factors currently are White House and congressional proposals that would cut government contributions to federal employee benefits, significantly devaluing the 1.9 percent pay raise that staffers are slated to get in January. The union growth occurred even before Thursday’s House approval of a budget proposal that would reduce subsidies to the Federal Employees Health Benefits Program. The budget plan calls for $32 billion in cuts targeted at feds over 10 years. While unspecified in the House budget resolution, those hits could include damaging retirement proposals previously offered by Trump.
At the same time AFGE recorded impressive growth in September, Trump was doing his best to weaken federal unions through his executive order revoking the labor/management forums created by predecessor President Barack Obama.
The forums “have consumed considerable managerial time and taxpayer resources, but they have not fulfilled their goal of promoting collaboration in the Federal workforce,” the order argues. “Public expenditures on the Council and related forums have produced few benefits to the public, and they should, therefore, be discontinued.”
The governmentwide council and agency forums were designed to foster cooperation between unions and management. Discussions included such things as workplace safety, productivity and data security.
Trump’s action is “a major step backward in the relationship between managers and front-line federal employees [that] will weaken efforts to make government more efficient and effective,” according to NTEU.
“This is an ominous sign for the future of federal labor-management relations,” NTEU President Tony Reardon added.
It’s not the only one.
After Trump announced his appointees to the Federal Services Impasses Panel in July, union leaders were aghast. The panel resolves disputes between agencies and federal labor organizations. With Trump’s appointees, labor leaders feel the deck is stacked against them.
“The Trump administration pulled out all of the stops on this one,” said Randy Erwin, president of the National Federation of Federal Employees (NFFE). “The diversity of this panel ranges from people who publicly campaign against unions to people that actively litigate against unions. I have little faith that this panel can properly evaluate a dispute without inherent bias or personal ideology interfering.”
Meanwhile, Trump’s dismantling of labor/management forums empowers efforts by congressional Republicans against “official time.” Now, they can argue, there is less reason for it.
Union officials use official time to participate in the forums and other activities designed to facilitate communication and problem-solving between labor and management. Labor leaders on official time are paid by the government while representing everyone in a bargaining unit, even those who don’t pay dues.
Rep. Jody Hice (R-Ga.), sponsor of a bill to significantly cut official time, gave a distorted view of the practice when he said that “paying federal employees to do union work interferes with providing the services that taxpayers deserve.”
The fact is that much “union work,” such as recruiting members, is not allowed. Official time covers working with management on issues involving federal employees, union members or not, such as safety and efficiency.
Congressional assaults on due process in the workplace also can encourage feds to join unions for protection. A law affecting the Department of Veterans Affairs, for example, weakens due process for all employees and eliminates the ability of VA’s senior executives to appeal disciplinary actions to outside agencies, as other feds can.
Union growth “has more to do with attacks coming from Congress than what is coming from the administration, with the latest example being the House-passed budget,” said Matt Biggs, legislative director of the International Federation of Professional & Technical Engineers.
The proposal was approved, 219 to 206, by the House last week, with no Democratic support and 18 Republicans defecting from their party line. It’s a line that assails the workforce as a way of weakening a bureaucracy that Republicans see as too strong.
On a related front, Trump’s plan to weaken government through personnel cuts led to Thursday’s letter to the House Oversight and Government Reform Committee chairman from all 18 Democrats on the panel, calling for hearings on the “degradation of the federal workforce.”
That degradation led NTEU’s Reardon to ask: “Since when is it acceptable to attack the very people who are providing hurricane relief, protecting clean air and water, conducting cutting-edge scientific research, enforcing the tax laws, securing the border, maintaining the national parks and guarding our financial system?”
The answer: Now more than ever.