Die Linke’s electoral result shows what the party must do to really contend for power. 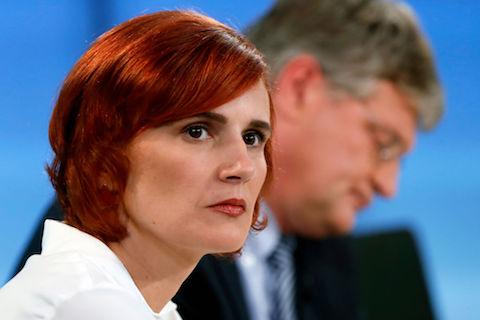 Katja Kipping, co-chairwoman of Die Linke, and Joerg Meuthen, federal co-chairman of the AfD, attend a TV discussion with the top candidates in the German federal elections on September 24, 2017 in Berlin, Germany. , Felipe Trueba / Getty

The news was predictable, but still bitter. After September 24’s general election, the far right Alternative for Germany (AfD) has entered the Bundestag with ninety-four MPs. For the first time since World War II, parliament will include a party to the right of the Bavarian Christian Social Union (CSU).

Germany’s ostensible safeguards against the reemergence of fascism as a political force — the 5 percent electoral threshold, the celebrated process of Geschichtsaufarbeitung (coming to grips with the past), and other social policies — have all failed.

The success of the far right partially reflects the decimation of the Social Democratic Party (SPD). The historic party of the German working class won just 20 percent of the vote, its worst result since 1949. This, however, is just the nadir of a decline that began with the SPD chancellor Gerhard Schröder’s early 2000s neoliberal reforms. His Agenda 2010 rolled back huge swathes of the once generous German welfare state, liberalized the labor market, and allowed low-wage contract labor to spread, dramatically accelerating the decline of organized labor, the party’s historical backbone.

But the apparent victor, Angela Merkel, has no reason to celebrate either. Winning only 30.2 percent of the vote, the Christian Democrats (CDU) fared badly, hemorrhaging around a million supporters to the AfD.

The reinvigorated neoliberal fundamentalists of the Free Democratic Party (FDP) benefited from the center’s decline. The party’s chief, Christian Lindner, has reinvented the Liberals as the voice of law and order, an AfD for pro-Europeans. Given the SPD’s decision not to participate in a grand coalition with the CDU, the FDP will probably find itself in government with Merkel. But this success may be ephemeral — after a phenomenal breakthrough in 2009, the Liberals were kicked out of parliament just four years later, and we can expect a similar result this time as well.

Nevertheless, the FDP’s participation in a coalition signals that Germany will adopt an even tougher stance on the eurozone crisis and increase its attacks on living standards. In North Rhine-Westphalia, where a CDU-Liberal coalition is already in power, the government has announced tuition fees for non-EU students, and launched a campaign to convince non-Germans to “simplify” their names. In addition, Angela Merkel’s promise to win back voters from the AfD indicates she will take more right-wing positions on immigration and other social issues.

The Greens remained stagnant at 8 percent and are poised to enter government with the CDU and the FDP. Once perceived as Germany’s taboo-breaking party, the Greens ran a thoroughly conformist campaign this year — they even avoided strong statements against the AfD’s racism. But the party couldn’t capitalize on its role in the opposition over the past four years, and their possible entry into government with the CDU and the FDP will likely damage their “alternative” credentials, as such a coalition will potentially entail compromises on questions of immigration and nuclear power.

The West is Red

There is, nevertheless, a silver lining for Germany’s biggest party on the Left. Die Linke managed to increase its vote share by 0.6 percent, winning 9.2 percent of the electorate. Around 4.3 million people voted for Die Linke, up from 3.75 million in 2013. The party gained around 700,000 votes from the SPD, over 300,000 from the Greens, and even 200,000 from the Christian Democrats. This growth is even more remarkable given Die Linke’s demographic-driven decline in its eastern strongholds, where it historically attracted pensioners who lost out during German reunification.

The elections confirmed that Die Linke’s core electorate has undergone a massive geographic shift. The party increased its share of the vote in nearly all formerly West German constituencies, particularly in urban centers, the heart of Germany’s political life.

Die Linke climbed to 12 percent in Hamburg, where its members visibly supported anti-gentrification and pro-refugee social movements. In Cologne — where it also received around 12 percent, up from 8.9 percent in 2009 — Die Linke did well in working-class neighborhoods like Kalk and Nippes, strongholds for the party’s left-wing where activists joined protests against skyrocketing rents and the AfD.

Die Linke also performed above average in Frankfurt (around 12 percent) and Munich (about 8 percent), but the results in Berlin are even more remarkable. Here, Die Linke did well in all former West Berlin constituencies, including Neukölln, where it regularly campaigns against gentrification and Islamophobia. Meanwhile, in former East Berlin — long considered the center of gravity for the party’s government-oriented right wing — support for Die Linke declined.

The party scored well among young voters (11 percent for the age groups of 18-24 year olds and 25-34 year olds) and as such performed particularly well in university towns like Freiburg and Münster.

These results show that Die Linke has left behind its reputation as a curious relic, a formation supported by East German pensioners and the West German unemployed — the so-called “losers of globalization.” It now attracts non-voters as well as former SPD and Green members who no longer identify with their parties’ tame responses to “Mutti Merkel.”

Whether Die Linke can sustain this trend will depend on a multitude of factors, but it is safe to assume that Germany’s left-wing voters share a number of features with those who support Jeremy Corbyn in the United Kingdom and Bernie Sanders in the United States — though the country lacks a politician with comparable popularity.

The flipside of this success in the West is Eastern voters’ massive loss of confidence in the party. Die Linke’s record here is well-known: it has participated in coalition governments with the SPD, accepted the monetarist consensus on public spending, and even implemented cuts in social services.

To read the rest of this article, click here

Mark Bergfeld is a graduate student at Queen Mary’s University of London.

Leandros Fischer is an activist based in Cologne, Germany.