Recently, the Spokane, Washington Spokesman-Review reported that with Hecla supervisory personnel working the mine, Lucky Friday silver production between July 2017 and September 2017 is 90 percent below its production for the same time period in 2016. 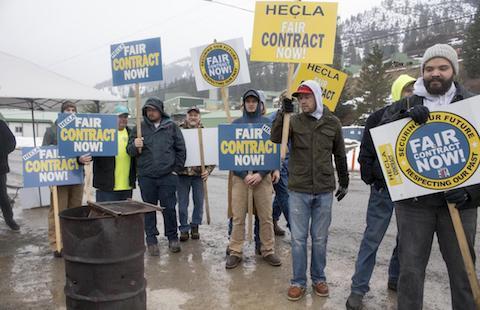 After six months on strike, 250 miners at the Lucky Friday silver mine in Mullan, Idaho remain determined to continue their fight for a fair contract that protects hard-won union pay, benefits, and safety measures.

In addition to maintaining a strong picket line for more than six months, the strikers, members of United Steelworkers Local 5114, have carried out an effective corporate campaign aimed putting their employer Hecla Mining on the defensive.

In addition to the Lucky Friday silver mine in Idaho, Hecla owns mines in Mexico, Canada, and Alaska that mine silver, gold, lead, and zinc.

The strikers next action against corporate greed will take them to Hecla headquarters in Coeur D’Alene, Idaho where on October 31 they’ll hold a solidarity rally.

After more than a year of bargaining, the strike began in March when the company tried to implement the terms of its last, best, and final contract offer made in February and rejected by Local 5114 members by a vote of 244-2.

The company’s offer also reduces the length of recall rights from three years to 90 days. Recall rights are important because, they protect workers’ jobs in event of layoffs or when the mine shuts down for long periods of repair and maintenance.

Hecla apparently thought that it could force a strike at one of its mines and carry on with business as usual, but that proved not to be the case.

Hecla’s silver production is a fraction of what it once was, and the business press is starting to take notice.

The strike at Lucky Friday “played a pretty big role in the (poor) financial performance Hecla Mining turned in during the second quarter of 2017,” reports The Motley Fool, which also observes that the strike has been “costly” to investors.

Seeking Alpha also reports that the strike has caused Hecla profits to fall.

For the company’s second quarter, the reporting period between April 2017 and June 2017, Hecla lost $24.2 million, a significant drop compared to the second quarter of 2016 when the company reported a profit of $24 million.

The outlook forward doesn’t appear to be much better.

Recently, the Spokane, Washington Spokesman-Review reported that with Hecla supervisory personnel working the mine, Lucky Friday silver production between July 2017 and September 2017 is 90 percent below its production for the same time period in 2016.

The strike has been hard on the workers, but they been strong and resilient. None of the union members have returned to work, and whenever they have had an opportunity, they’ve taken the fight to corporate management.

In August, Steelworkers including two Lucky Friday miners confronted Hecla executives in New York City during a meeting with investors.

They “stormed in during Hecla’s presentation chanting, ‘Hecla, Hecla you can’t hide. We can see your greedy side.”

They also met with some investors at that meeting to describe the impact that the strike was having on the company.

In September, members of Local 5114 attended the National Mining Hall of Fame and Museum induction banquet where they passed out information about the strike.

The strikers accused Phillip Baker, the CEO of Hecla, of trying “to starve our families into accepting a contract that lowers pay, undermines job security, and gives management unchallenged authority to decide who works and when and where they’re assigned regardless of seniority or health and safety concerns.”

When he learned that Local 5114 members were at the banquet, he “lost his cool” and demanded that the workers be removed from the banquet.

The striking miners have received support from their communities where they live and from union members outside the community.

In September, a group of young workers and retirees from International Longshore and Warehouse Union (ILWU) locals in the Pacific Northwest traveled to Mullan to help the miners picket.

With help from United Steelworkers international office, Local 5114 has paid out $994,000 in assistance to strikers and their families.

During all this activity, the union’s bargaining team has been meeting with company negotiators.

They met for three days earlier in October and reported that some progress has been made, but more work needs to be done.

The next round of negotiations is scheduled for October 25, 26, and 27.