For The First Time, Astronomers Observed The Merging Of Neutron Stars

For the first time in history, gravitational wave astronomy isn't a pipe dream, nor is it a way of looking for esoteric objects we can't see via any other means. 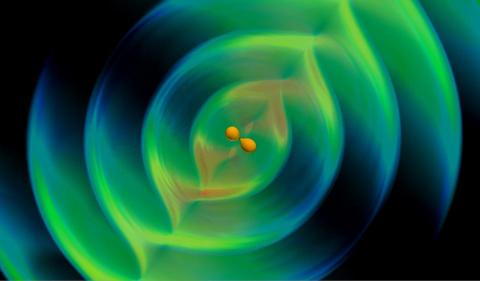 3D rendering of the gravitational waves emitted from a binary neutron star system at merger. The central region (in density) is stretched by a factor of ~5 for better visibility., AEI Potsdam-Golm

On August 17th of this year, with both LIGO detectors and Italy's VIRGO detector all operational, the inevitable happened: the arrival of the final moments of a signal from a distant galaxy, as two neutron stars merged. Although the merger happened in the distant past, gravitational waves move only at the speed of light, and August 17th was the date the final moments of the inspiral and merger occurred from our perspective here on Earth. With three detectors operating at once, we were able to pinpoint the location on the sky where it occurred. Across the world, some 70 observatories trained their eyes on the location, seeing the telltale signs of two neutron stars merging, within hours of it occurring, for the first time. This first-of-its-kind triumph will no doubt go down as the astronomical discovery of the year.

The galaxy NGC 4993, located 130 million light years away, had been imaged many times before. But just after the August 17, 2017 detection of gravitational waves, a new transient source of light was seen: the optical counterpart of a neutron star-neutron star merger.

The theory on neutron star mergers has been around for a long time: they're the origin of a class of gamma-ray bursts. In theory, there should be many such systems that lead to neutron star mergers, as massive binary stars that both go supernova should produce neutron stars, save for the most massive ones. We've seen plenty of binary pulsar systems, and we know those are neutron stars, so we're confident they exist. Over time, these orbits gravitationally decay, leading to a speed-up of the orbit that we've not only observed, but that's been awarded a Nobel Prize all its own. Just as black holes inspiral and merge, so, too, should neutron stars, from the emission of gravitational waves. 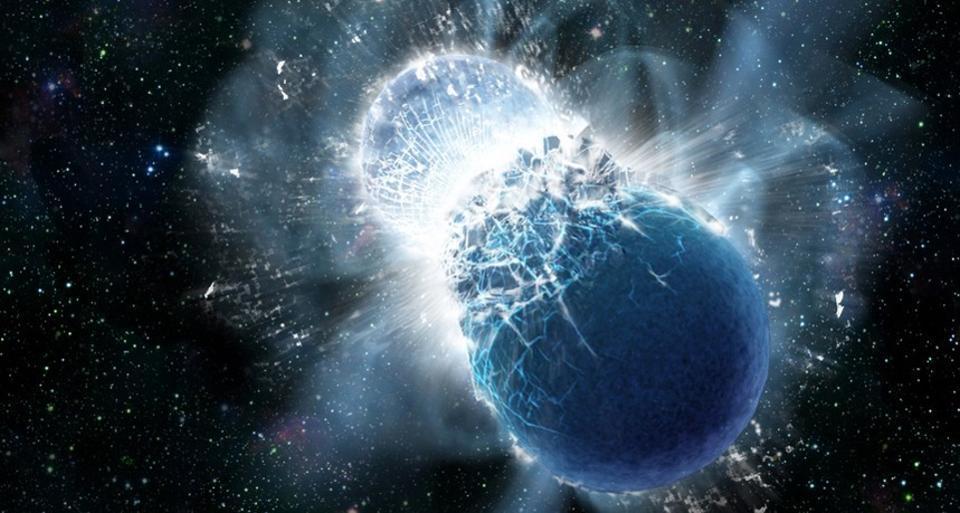 Two merging neutron stars, as illustrated here, do spiral in and emit gravitational waves, but are much more difficult to detect than black holes. Hence, they can only be seen if they're close by. However, unlike black holes, they should eject a fraction of their mass back into the Universe, where it composes most of the heaviest elements we know of, and emits an electromagnetic counterpart.

Unlike black hole-black hole mergers, neutron star mergers don't go all the way to the event horizon, but rather have a hard surface. The inspiral phase will be similar to that of black holes, but lower in amplitude (due to the lower mass), and there will be a cutoff: when the two surfaces meet. At that moment, there will be a runaway, energetic reaction, as about 5% of the neutron stars' mass gets ejected, spewing out huge amounts of the heaviest stable elements into space, and leading to the creation of a black hole that's ~95% of the combined mass of the neutron stars. In addition, there will be radiation emitted: a gamma-ray burst, followed by an ultraviolet/optical afterglow that will fade into the infrared and then away entirely. 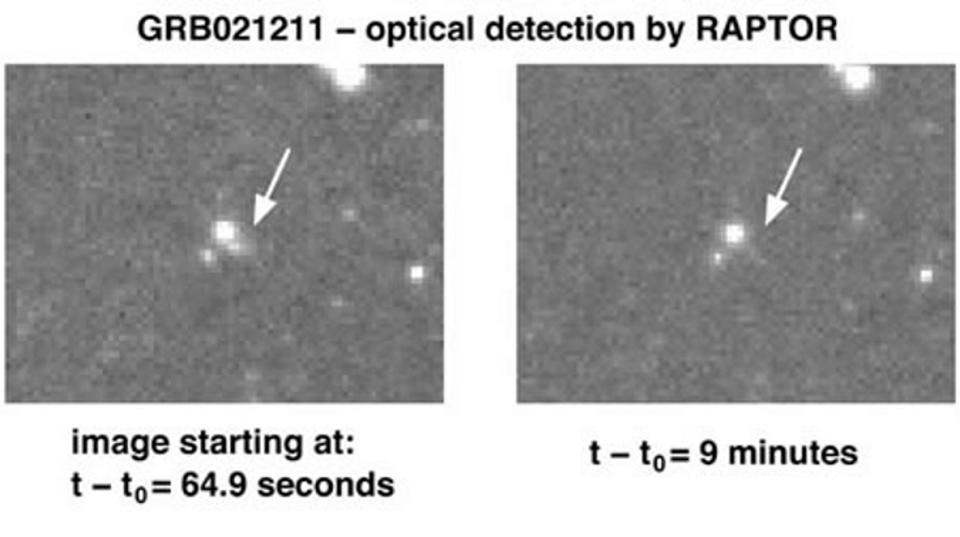 There has been indirect evidence of each of these steps independently, but nothing linking them all together with the same event. Until, that is, the August 17th event came along. With three detectors — LIGO Hanford, LIGO Livingston, and VIRGO — all running simultaneously, the evidence of an inspiral began to show up in every one. 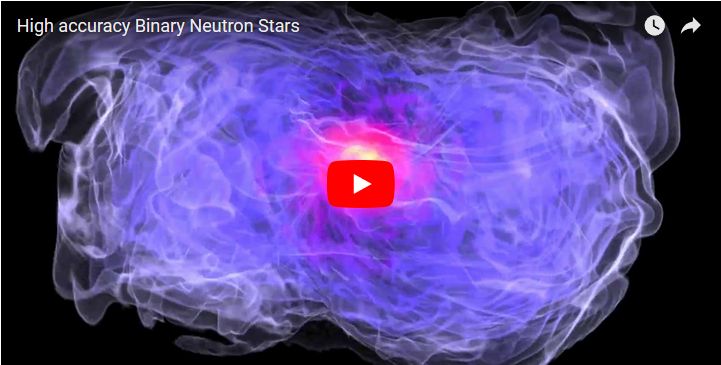 The signal that we saw lasted much longer and the merger occurred much closer to Earth than any of the prior black hole-black hole mergers previously seen by the detectors. Even though the signal itself was much smaller, our close proximity and the long duration that a signal could be extracted for led to not only a robust detection, but a quick and precise measurement on the sky of exactly where this event occurred. After only a few hours of manual analysis to augment the automated detection software, the location was determined: galaxy NGC 4993, just 130 million light years away. 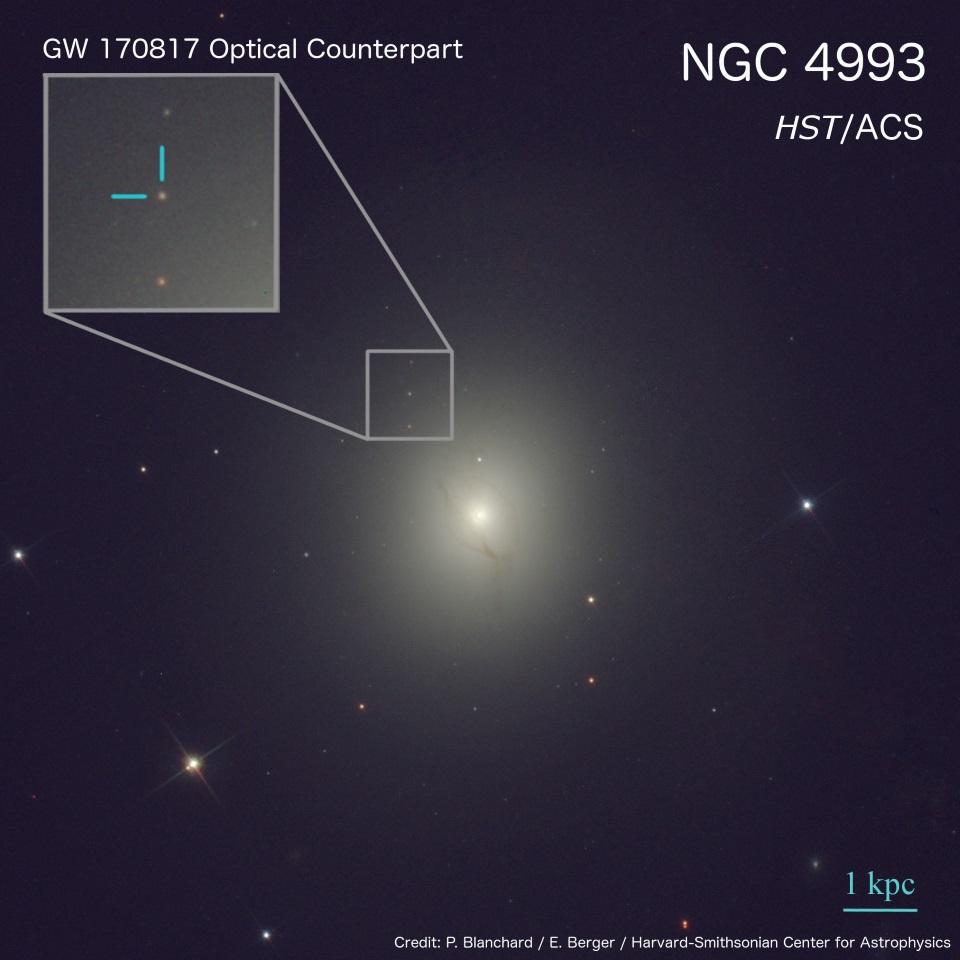 As soon as the location had been pinpointed, many of Earth's greatest observatories, including the space-based Hubble, turned towards NGC 4993 to observe it. The telltale sign of a neutron star-neutron star merger, shown above, represented the first cross-correlation between the gravitational wave and electromagnetic sky.

As the bulletin went out to observatories all across the world — including in low-Earth orbit — a total of some 70 telescopes trained their eyes on the location pointed out by the gravitational wave detectors. What they saw was a spectacular confirmation of what was theoretically predicted, and marked the very first time that the same event was seen in the gravitational wave sky and the light-based sky. This was the major scientific goal gravitational wave observatories like LIGO hoped to achieve when they were designed. Despite the fact that black hole mergers came first, it's remarkable that just two years later (and just weeks after the VIRGO detector was first synced with the LIGO detectors), merging neutron stars were caught in the act.

The inspiral and merger of two neutron stars, as illustrated here, produced a very specific gravitational wave signal. Additionally, the moment and aftermath of the merger also produced electromagnetic radiation that's unique and identifiable as belonging to such a cataclysm.

The gravitational wave signal indicated that, indeed, the neutron stars inspiraled at speeds up to a third the speed of light, collided-and-merged, and formed a black hole. The light-based observations, however, were the most remarkable follow-up we could have asked for, showing unambiguously that neutron-rich material was rapidly thrown off, decaying on timescales that matched theoretical predictions exactly. This was the first observation of a so-called kilonova from so early in the process, and confirmation from across the electromagnetic spectrum. According to Duncan Brown of Syracuse University, an expert in gravitational wave astronomy and a member of the LIGO team:

"When you watch that radioactive decay, what you’re basically watching is space alchemy. It’s the universe creating gold and platinum."

For the first time, we now have visual evidence that the heaviest elements in the periodic table don't primarily arise from supernovae, but from neutron star collisions. 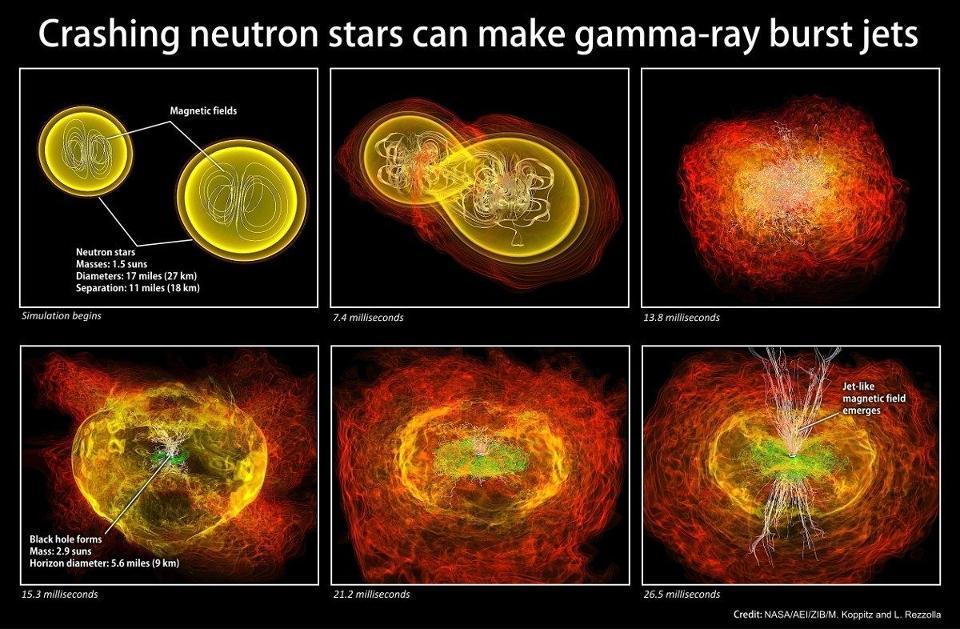 We knew that when two neutron stars merge, as simulated here, they should create gamma-ray burst jets, as well as other electromagnetic phenomena. As it turns out, it was the signals from the radioactive decay of neutrons that indicated the presence of gold, platinum, and other heavy elements in great abundance.

According to Stefan Ballmer, who helped build the Advanced LIGO detectors, the amount of gold produced by this one collision rivals the mass of our Moon:

For those of you wondering, that's approximately 1046 atoms of gold, or ten quadrillion times as much as we've mined in all of human history. 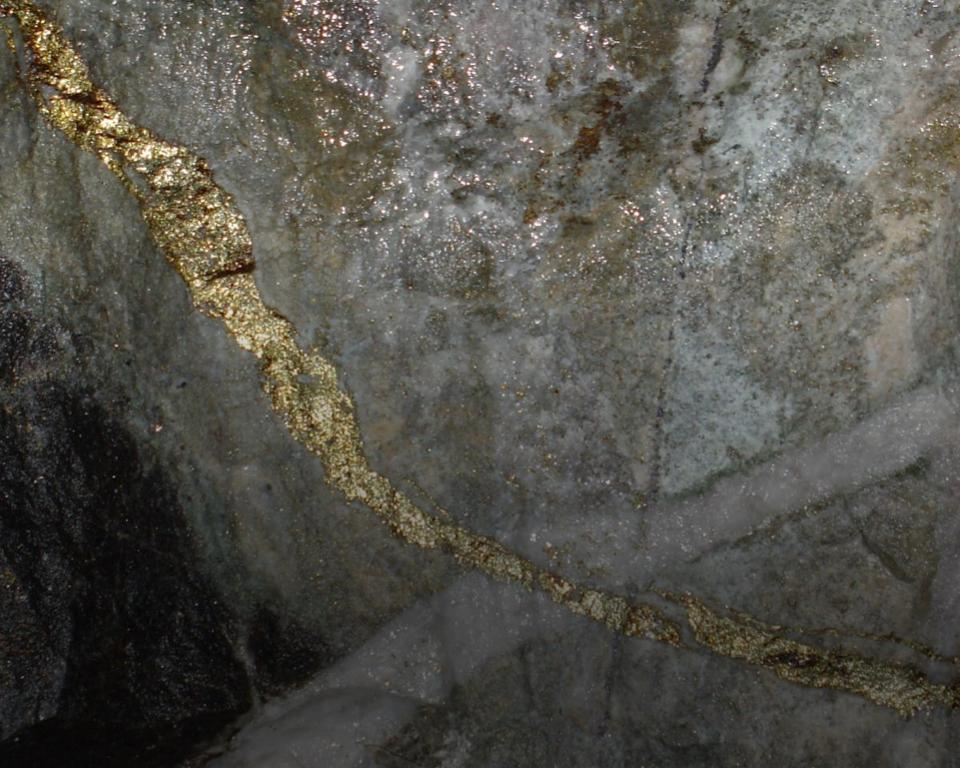 The gold we find on the surface of Earth comes in veins and streak-like deposits. Over the course of hundreds of millions to billions of years, the gold from neutron star collisions finds its way into star-forming regions, where it becomes part of newly-forming planets. In perhaps a billion years, the gold from this collision will wind up in a series of new planets as well.

Thanks to the work of the LIGO and VIRGO teams, we were able to pinpoint the location of the merger as being in the small galaxy NGC 4993, located just 130 million light years distant. (The first gravitational wave event, by comparison, was more than ten times farther away; it was only the close proximity of these merging neutron stars to us that enabled a detection.) Owing to the electromagnetic follow-up that was made possible by having three detectors going at once, we've been able to bring together traditional astronomy with gravitational wave astronomy for the first time. According to Edo Berger,

“We’ve shown that the heaviest elements in the periodic table, whose origin was shrouded in mystery until today, are made in the mergers of neutron stars. Each merger can produce more than an Earth’s mass of precious metals like gold and platinum and many of the rare elements found in our cellphones.”

In addition, we've learned that these neutron stars formed some 11-12 billion years ago, and have been inching closer towards a merger ever since. What we saw during those few days from the middle to the end of August was the culmination of a gravitational wave story that's more than twice as old as the entire Earth. 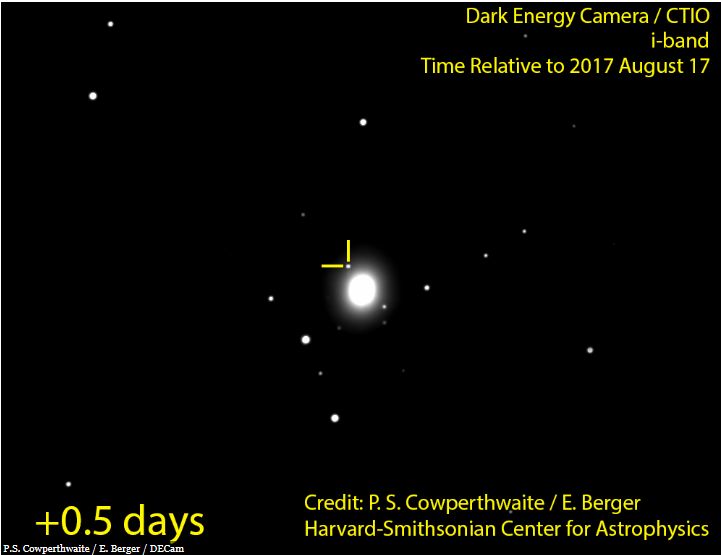 For the first time in history, gravitational wave astronomy isn't a pipe dream, nor is it a way of looking for esoteric objects we can't see via any other means. Instead, it's truly a part of our night sky, and the first signpost of an astronomical cataclysm. In the future, as gravitational wave astronomy improves, it may even serve as an early warning system, enabling us to locate sources about to merge before they ever do so. It may grow to include not only black holes and neutron stars, but white dwarfs and supermassive black holes swallowing objects as well. Gravitational wave astronomy is only two years old, and we haven't even taken it to space yet. The next step in understanding the Universe is before us. Sit back and enjoy the ride!

Astrophysicist and author Ethan Siegel is the founder and primary writer of Starts With A Bang! His books, Treknology and Beyond The Galaxy, are available wherever books are sold.