Dennis J. Banks: “Make No Mistake America, We are Going to be on Your Back” 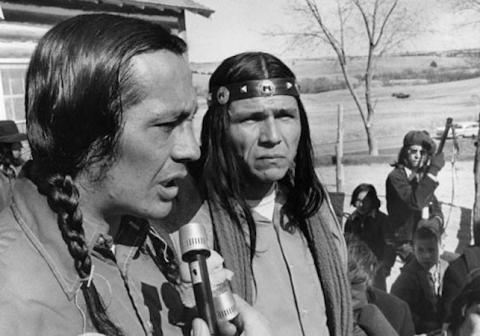 Dennis J. Banks (Ojibwe), the co-founder of the American Indian Movement, who led a movement that brought to light the injustices American Indians still endured during the past half-century, walked on Sunday night at the Mayo Clinic in Rochester, Minnesota with his family and friends at his side. He was 80.

His death was the result of complications after undergoing open heart surgery on Wednesday, October 18, 2017. During the past week, he developed pneumonia and his condition worsened.

True to the name of his autobiography entitled Ojibwe Warrior, Banks was a tireless fighter for American Indians issues, causes and concerns. Banks became one of the most renowned American Indian leaders of the last century.

“I want to be remembered as somebody who stood up when it was time to stand up. Nothing more. I tell my children when I get before the Great Spirit all I want to be able to  say is I did my very best,” Banks stated during “A Conversation with Dennis Banks” at Grand Valley State University in November 2009.

Born on the Leech Lake Indian Reservation in 1937, Banks’ Indian name was Nowa Cumig, which means “In the Center of the Universe.” Banks was taken from his family home at the tender age of five and put on a bus and sent many miles from home to an American Indian boarding school. The boarding school experience never left Banks as he championed American Indian causes later in life.

By 1953, he joined the Air Force and was sent to Japan for three years of service. After his military service, Banks came home to Minnesota where he spent the next years of his life between the Leech Lake Indian Reservation and the Twin Cities of Minneapolis and St. Paul.

Having struggled to find a job and needing to feed his family, Banks was arrested for stealing food for his family and was sent to prison where he heard the complaints of many fellow American Indian prisoners who faced police brutality both in and out of prison.

Banks co-founded the American Indian Movement (AIM) with Clyde Bellecourt, George Mitchell and Vernon Bellecourt in 1968 as a result of police abuse against American Indians in the Minneapolis – St. Paul area. Banks asked Russell Means, who was the director of the Cleveland Indian Center when AIM was formed, to become part of the movement.

Author Peter Matthiessen described Banks in his national bestseller, In the Spirit of Crazy Horse, as “a handsome man with an intense, brooding expression.” Matthiessen continued, “Banks was quickly established as the most thoughtful and articulate leader in the new Movement.”

The American Indian Movement became one of the most powerful groups for social change in the United States and propelled Banks to be among the most influential American Indian leaders of the past century.

By November 1972, AIM had already become a national platform for American Indian rights. While other organizations existed with the same concerns, AIM was much more vocal and mobilized faster.

Since its inception, AIM always used treaties as a basis of its appeal for justice in the United States for American Indians. Treaties are a legal means most other people of color do not have. Banks and other AIM leaders understood this and utilized these documents to their advantage.

On November 3, 1972, just days before the presidential election, AIM brought the Trial of Broken Treaties caravan to Washington, D.C. Banks traveled by caravan from Seattle and was joined by others from various parts of the country. The purpose was to present the U.S. Department of the Interior’s Bureau of Indian Affairs (BIA) a 20-point proposal for improving relations with the federal government and American Indians throughout the country.

AIM ended up taking over the BIA building and occupied it for several days until an peaceful end was negotiated.

In early 1973, Banks and other AIM members went to Custer, South Dakota to seek justice for Wesley Bad Heart Bull, an American Indian man who was stabbed to death by a white man. Charged with second-degree murder, the killer served only one day in jail. In a meeting prior to going into Custer, it was Banks who borrowed the phrase from Crazy Horse, “It’s a good day to die,” to mobilize AIM members into action. A riot ensued and Banks and several other AIM members were arrested.

Some historians cite the Custer incident as a prelude to the takeover of Wounded Knee, a small hamlet on the Pine Ridge Indian Reservation. Banks and other AIM leaders chose Wounded Knee because of its symbolic significance in history where the U.S. 7th Cavalry massacred some 300 men, women and children four days after Christmas in 1890.

On February 27, 1973, Banks led nearly 200 Oglala Lakota and AIM members into Wounded Knee where they seized and occupied the hamlet for 71 days. While at Wounded Knee, the occupiers faced thousands of rounds ammunition from the U.S. government.

While the media classified the AIM occupiers as militants, American Indians called them modern-day warriors.

What erupted at Wounded Knee was nothing short of warfare against those Indian warriors. Military helicopters and jets flew overhead, dozens of tanks rolled in and more than 130,000 rounds of ammunition were fired into occupied Wounded Knee. Most nights were filled with gunfire from federal marshals and National Guard members.

After the 71-day siege ended, Banks was indicted for 10 felony counts for his involvement at Custer and Wounded Knee. After an eight-month trial, Judge Fred Nichol, citing misconduct by the government, dismissed the case and Banks was free.

However, Banks still faced charges inciting a riot and assault charges connected to the Custer incident. In 1975, Banks was convicted of the charges. He fled South Dakota and became a fugitive. One of his attorneys, William Kunstler, presented then-Governor Jerry Brown a petition—in pre-internet days—with over 1.4 million signatures to grant Banks amnesty. Brown refused to extradite Banks to South Dakota and granted him amnesty. Banks remained there throughout Brown’s administration and later found protection on the Onondaga Nation near Syracuse, New York after Brown left office.

Wanting to get the episode behind him, in September 1984, Banks flew to Rapid City, South Dakota and turned himself in to authorities.

After Wounded Knee, Banks stayed in the headlines fighting one cause to another. In 1978, after hearing of pending legislation in the U.S. Congress that would greatly diminish treaty rights and the removal of traditional Navajo citizens from the Big Mountain region of Arizona, Banks and others organized a cross-country three-thousand-mile walk from Alcatraz Island to Washington, D.C. called the Longest Walk.

Because Banks could not leave California, Banks was only able to participate in the Longest Walk from Alcatraz Island to the California-Nevada border. Though he was not present with the long walkers in Washington, D.C., Banks was proud that some 30,000 people were on hand as the long walkers made their way into the nation’s capitol. Among those in attendance were Senator Edward Kennedy, actor Marlon Brando and boxer Muhammad Ali. In the end, the legislation died for lack of support.

Since then, Banks has led several more Longest Walks including in 2008, 2011, 2014 and 2015. Each one had a different theme. His most recent was this past summer called the Longest Walk

Banks remained relevant to American Indian causes until the end. During the recent Standing Rock resistance of the Dakota Access oil pipeline, Banks made several trips to provide mentorship to a whole new generation called “water protectors” who were willing to once again fight to protect the rights of American Indians.

On the day before the camps were closed in February 2017, standing in front of a military tent with the sounds of heavy equipment in the background, Banks told the assembled crowd they can be proud that they showed the world their resistance against big oil.

“Thirty years from now, your young grandchildren will ask you about Standing Rock. You can tell them with pride, you were here. We were here being who we are,” Banks stated.

He recounted his experiences with Russell Means and other members of the American Indian Movement, being at Wounded Knee in 1973.

“We should let it be known: Make no mistake America, we are going to be on your back,” Banks said as he was concluding his remarks to the water protectors.

Banks co-authored his autobiography, Ojibwa Warrior: The Rise of the American Indian Movement, with Richard Erdoes in 2005.