The most dramatic and beautiful of writers who caught history -- the history of continents and of half-forgotten figures who struggled for what truly mattered -- in a unique fashion, in passages of hardly a page or more. 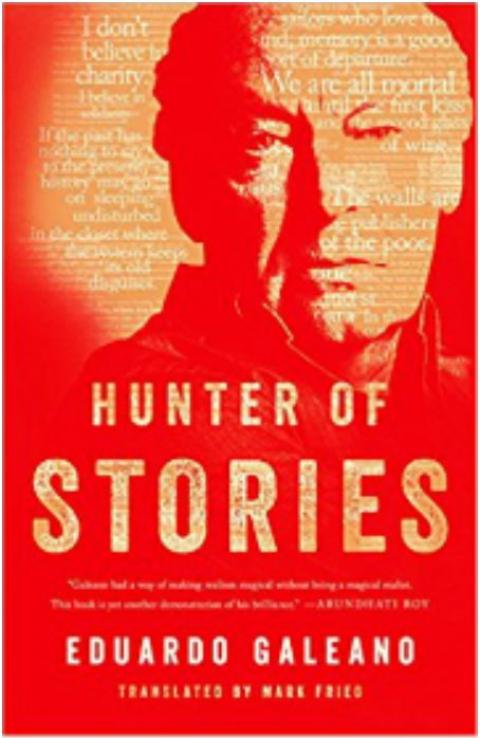 If you've never read a book by Eduardo Galeano, believe me, your life has been lacking. Read his first book, read his last book, read something he wrote anyway. I offer you the Engelhardt guarantee: you won't regret it. Start, if you wish, with his final volume, Hunter of Stories, featured in today's post and then work your way back through a writer to remember.  -- Tom Engelhardt

I’m 73, which means that saying goodbye for the last time is increasingly a part of my life.  Today, with the deepest regret, I’m bidding a final farewell at TomDispatch to one of the more remarkable writers I’ve known, Eduardo Galeano. I initially got involved with him in the early 1980s. I was a young editor at Pantheon Books and, on some strange impulse, decided to publish Genesis, the first volume of his Memory of Fire trilogy, based on no more than a few sample passages translated by the remarkable Cedric Belfrage. Call it intuition when it came to a book that had already been rejected by a number of U.S. publishers. (Admittedly, at the time I proudly thought of myself as the “editor of last resort” in New York publishing.) That modest decision launched me on the print journey of a lifetime.

This was back in the days many of you won’t remember when a book was translated and edited, often over long distances, without benefit of the Internet or email.  Belfrage had been exiled to Mexico during the McCarthy years, so he and I worked together in the old-fashioned way: by mail. (I wouldn’t meet him until years later: a little grey-haired gent with a cane who -- I was still young enough to be staggered by the thought -- had covered Hollywood for the British press in the silent film era.) It took forever to produce Genesis, though the process had a certain beauty to it. That first volume came out to modest attention and reviews, but its life and influence and that of the whole Memory of Fire trilogy would continue to grow in a way that only books could in those years and perhaps even in these. Eduardo was the most dramatic and beautiful of writers and he caught history -- the history of these continents and of so many of the half-forgotten figures who struggled for what truly mattered -- in a unique fashion, often in little passages of hardly a page or more. (I can still remember reading some of the more wonderful of them to my children as they were growing up.) I once wrote of him, “You somehow take our embattled world and tell its many stories in ways no one else can.” How true.

It took me years to meet Eduardo, since I travel nowhere, though he voyaged endlessly. (A friend of his once told him, “If it’s true what they say about the road being made by walking, you must be the commissioner of public works.”) Never have I met a man of more charisma who seemed less aware of it. Being with him was an experience because people regularly approached him to tell stories about their lives that were... well, there’s only one word for it: Galeano-esque. I saw it happen.

I’ve featured his work many times at this site, always with the deepest pleasure. This, I suspect, is the last time for both of us. The passages below are from his final, touching volume published by Nation Books, Hunter of Stories. And so, let me take this opportunity, one last time, to say goodbye, Eduardo, and thank you for everything, especially for the worlds you captured forever in words. Tom

[The following passages are excerpted from Hunter of Stories, the last book by Eduardo Galeano, who died in 2015.  Thanks for its use go to his literary agent, Susan Bergholz, and Nation Books, which is publishing it next week.]

By day, the sun guides them. By night, the stars.

Paying no fare, they travel without passports and without forms for customs or immigration.

Birds are the only free beings in this world inhabited by prisoners. They fly from pole to pole, powered by food alone, on the route they choose and at the hour they wish, without ever asking permission of officials who believe they own the heavens.

The world is on the move.

On board are more shipwrecked souls than successful seafarers.

Thousands of desperate people die en route, before they can complete the crossing to the promised land, where even the poor are rich and everyone lives in Hollywood.

The illusions of any who manage to arrive do not last long.

Saint Columba was rowing across Loch Ness when an immense serpent with a gaping mouth attacked his boat. Saint Columba, who had no desire to be eaten, chased it off by making the sign of the cross.

Fourteen centuries later, the monster was seen again by someone living nearby, who happened to have a camera around his neck, and pictures of it and of curious footprints came out in the Glasgow and London papers.

The creature turned out to be a toy, the footprints made by baby hippopotamus feet, which are sold as ashtrays.

The revelation did nothing to discourage the tourists.

The market for fear feeds on the steady demand for monsters.

In a community newspaper in Barcelona’s Raval neighborhood, an anonymous hand wrote:

Your god is Jewish, your music is African, your car is Japanese, your pizza is Italian, your gas is Algerian, your coffee is Brazilian, your democracy is Greek, your numbers are Arabic, your letters are Latin.

I am your neighbor. And you call me a foreigner?

Back in the years 1975 and 1976, before and after the coup d’état that imposed the most savage of Argentina’s many military dictatorships, death threats flew fast and furious and anyone suspected of the crime of thinking simply disappeared.

Orlando Rojas, a Paraguayan exile, answered his telephone in Buenos Aires. Every day a voice repeated the same thing: “I’m calling to tell you you’re going to die.”

“So you aren’t?” Orlando asked.

The terrorizer would hang up.

A Visit to Hell

Some years ago, during one of my deaths, I paid a visit to hell.

I had heard that in the underworld you can get your favorite wine and any delicacy you want, lovers for all tastes, dancing music, endless pleasure...

Once again, I was able to corroborate the fact that advertising lies. Hell promises a great life, but all I found were people waiting in line.

In that endless queue, snaking out of sight along narrow smoky passages, were women and men of all epochs, from cavemen to astronauts.

All were condemned to wait. To wait for eternity.

That’s what I discovered: hell is waiting.

Who was it that a century ago best described today’s global power structure?

Not a philosopher, not a sociologist, not a political scientist either.

It was a child named Little Nemo, whose adventures were published in the New York Herald way back in 1905, as drawn by Winsor McCay.

Little Nemo dreamed about the future.

In one of his most unerring dreams, he traveled to Mars.

That unfortunate planet was in the hands of a businessman who had crushed his competitors and exercised an absolute monopoly.

The Martians seemed stupid, because they said little and breathed little.

Little Nemo knew why: the boss of Mars had seized ownership of words and the air.

They were the keys to life, the sources of power.

For several centuries subjects have donned the garb of citizens, and monarchies have preferred to call themselves republics.

Local dictatorships, claiming to be democracies, open their doors to the steamroller of the global market. In this kingdom of the free, we are all united as one. But are we one, or are we no one? Buyers or bought? Sellers or sold? Spies or spied upon?

We live imprisoned behind invisible bars, betrayed by machines that feign obedience but spread lies with cybernetic impunity.

Machines rule in homes, factories, offices, farms, and mines, and also on city streets, where we pedestrians are but a nuisance. Machines also rule in wars, where they do as much of the killing as warriors in uniform, or more.

The Right to Plunder

He found marvelous texts in Babylonian, heroes and gods sculpted in the hills of Nineveh, winged lions that had flown in Assyria...

Someone approached him, offered to help: “Shall I call a doctor?”

Squatting, Samir buried his face in his hands and swallowed his tears.

But according to Víctor Quintana, a congressman in Mexico, the book saved his life. In the middle of 1997, he was kidnapped by professional assassins, hired to punish him for exposing dirty deals.

They had him tied up, face down on the ground, and were kicking him to death, when there was a pause before the final bullet. The murderers got caught up in an argument about soccer. That was when Víctor, more dead than alive, put in his two cents. He began telling stories from my book, trading minutes of life for every story from those pages, the way Scheherazade traded a story for every one of her thousand-and-one nights.

At last the murderers left him, tied up and trampled, but alive.

They said, “You’re a good guy,” and they took their bullets elsewhere.

Quite a few years ago now, during my time in exile on the coast of Catalonia, I got an encouraging nudge from a girl eight or nine years old, who, unless I’m remembering wrong, was named Soledad.

I was having a few drinks with her parents, also exiles, when she called me over and asked,

And since she had me against the ropes, she hit me again: “Books sit still. I like songs because songs fly.”

Ever since my encounter with that angel sent by God, I have attempted to sing. It’s never worked, not even in the shower. Every time, the neighbors scream, “Get that dog to stop barking!”

My granddaughter Catalina was ten.

We were walking along a street in Buenos Aires when someone came up and asked me to sign a book. I can’t remember which one.

We continued on, the two of us, quietly arm in arm, until Catalina shook her head and offered this encouraging remark: “I don’t know why they make such a fuss. Not even I read you.”

Eduardo Galeano (1940-2015) was one of Latin America’s most distinguished writers.  He was the author of many books, including the three-volume Memory of Fire, Open Veins of Latin America, Soccer in Sun and Shadow, and The Book of Embraces.  Born in Montevideo in 1940, he lived in exile in Argentina and Spain for 12 years before returning to Uruguay in 1985, where he spent the rest of his life.  The passages in this post are excerpted from his final book, Hunter of Stories, translated by Mark Fried and about to be published by Nation Books.

Follow TomDispatch on Twitter and join us on Facebook. Check out the newest Dispatch Book, Alfred McCoy's In the Shadows of the American Century: The Rise and Decline of U.S. Global Power, as well as John Dower's The Violent American Century: War and Terror Since World War II, John Feffer's dystopian novel Splinterlands, Nick Turse’s Next Time They’ll Come to Count the Dead, and Tom Engelhardt's Shadow Government: Surveillance, Secret Wars, and a Global Security State in a Single-Superpower World.