This volume is an insider's account of Greece's recent struggle to preserve the general welfare of its people in the fact of the belt-tighening demands of the managers of the international financial system. Reviewer Rensin offers an assessment. 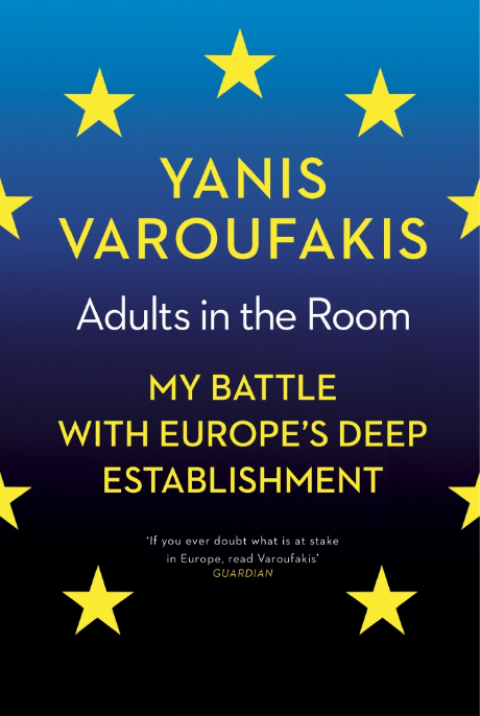 ADULTS IN THE ROOM
My Battle with the European and American Deep Establishment
Yanis Varoufakis
Farrar, Straus and Giroux
ISBN: 9780374101008

If you are not the sort of person who is already likely to read a 500-page book on the  former Greek finance minister’s efforts to save his country from the machinations of the International Monetary Fund, then you aren’t going to become one because I leave you in suspense. So let me spoil Yanis Varoufakis’s Adults in the Room for you now. He failed.

In early 2015, it looked as if Varoufakis’s party, the left-wing Syriza party, had a chance to roll back some of the harsh austerity measures the EU and IMF imposed on their country in the wake of the global financial crisis. Syriza came to power in January 2015, promising a better deal, and in July that year Greeks voted to reject the latest bailout proposal from the European Commission, European Central Bank, and IMF. Despite all this, Greece ultimately agreed to deep austerity measures. The country would service its creditors at the expense of its citizens, who suffered swingeing cuts to wages, pensions and public sector jobs at the same times as hikes in VAT and property taxes. Hell hath no fury like an international credit consortium scorned. This book is Varoufakis’s best effort to explain why his best effort was not enough.

Other writers have already explored the relative success or failure of Varoufakis’s accounting. On the superlative end, Paul Mason writes in the Guardian that Adults in the Room is “one of the greatest political memoirs of all time,” “one of the most accurate and detailed descriptions of modern power ever written,” that it will “gain the same stature as Robert Caro’s biography of Lyndon B. Johnson” as “a manual for exploring the perils of statecraft.”

While more grandiose in his praise than most reviewers, Mason follows the broad consensus. Varoufakis’s book lays bare the way Europe’s leading powers disguised bailouts of their own financial institutions as “assistance” to Greece, and confirms what many on the left have long suspected: that we live in an era in which the interests of supernational institutions—particularly the “troika” of the EUC, ECB, and IMF—outweigh those of sovereign nations. Fail to take on debts to these organizations, and your national economy will be fatally excluded from currency and trade arrangements. Take them on, and your economy will become a vehicle for servicing your debt. If hospitals and schools and social services must be plundered in order to accomplish this goal, so be it.

The “adults in the room” of Varoufakis’s title are the serious and sober decision makers who guard the global financial order. They act, as Varoufakis says, not out of greed or cruelty, but because their best intentions have been captured by the untenable and mystifying financial arrangements that keep capital alive in this century. They are “adults” by virtue of their willingness to resolve the terrible disparity between the rich countries’ self-proclaimed moral authority and the damage they wreak on smaller economies. The real grown-ups don’t let the perfect become the enemy of the convenient. The adults are a network of mutually dependent “insiders,” Varoufakis says, and for all their power they don’t have much leeway within their hierarchies to defy the status quo. If they did, they’d simply lose their positions and end up replaced by someone more willing. This was, ultimately, what happened to Varoufakis.

“Austerity,” Varoufakis writes, “is a morality play pressed into the service of legitimizing cynical wealth transfers from the have-nots to have haves during times of crisis.” That is the essential case contained in these 500 pages and the one that most every critic, myself included, finds essential.

But making that case is not all that Adults in the Room is after. Some critics—most notably Helena Sheehan in the leftwing magazine Jacobin—have attacked Varoufakis for failing to apply systemic analysis to what he correctly identifies as a systemic problem, and for discounting the role of the broader Greek left in the process. Sheehan agrees, along with Mason, that Adults in the Room “lucidly explains” the process by “Greece was never ‘bailed out’ but forced, through many layers of subterfuge, to bear the burden of bailing out German and French banks.’” She also concurs that by recounting the many tangled private conversations that led to this arrangement, Varoufakis performs a “service in bearing witness” to an “essential dynamic.” But, Sheehan argues, the book is ultimately selective with the facts “in a way that is blatantly self-justifying.” Among the book’s chief sins, she writes, is the way in which only the technocratic “adults” are held to account for their actions:

Everyone else’s role is blurred, distorted, or even invisible. Syriza barely exists. The Greek Left are nearly absent. The Greek people fade into the background. It is a landscape of elite players and anonymous masses.

Adults in the Room is a “Lone Ranger narrative,” “blind” to its own elitist tendencies, focusing on a battle of personalities rather than setting the crisis in historical context. “His hubris blinds him to the bigger picture,” Sheehan concludes. “Varoufakis projected himself as Prometheus, but revealed himself to be more of a Narcissus.”

There is no doubt that Varoufakis is grandiose. Adults in the Room is the work of a man who spent his time in office being photographed on his motorcycle, leather jacket never failing to expose his rippling muscles. He devotes plenty of room in the book to settling scores and talking up his own “solitary struggle,” and his account is filled with pretension masquerading as style. His very first sentence describes “amber liquid flickering in the glass” in a hotel bar. He has come to the bar, he explains, because he is one of the “few” for whom “burdens trump sleep.” He tells us that “watching Greece’s creditors at work was like watching a version of Macbeth unfold in the land of Oedipus,” as if the real trouble with the European Union is its inability to stick to one metaphor. Varoufakis is smiling, always smiling, as he “dismisses” threats, gives difficult, honest answers, and outwits dour German bureaucrats.

But I am not interested in suggesting that Adults in the Room would have been a better book if it had not been so exhaustingly teenaged in its cool. Rather, I want to ask whether it is really possible to “expose” the intrigues of financial power in a book like this. While Varoufakis’s routine may have been among the more grating of bad choices, it possible that there were never any good choices on offer here.

The problem, at bottom, is that having lost the material battle for the future of Greece, Varoufakis can only tell a story. For all his “revelations” about the working of the IMF here, his book reveals very little that was not already known. Showing how a system fails people is not the same as acquiring the power to change that system and bring about a better world. The whole magic of the “adults” this book goes after is that “insiders” do not need to operate in secret. They only need to operate with irresistible force. That is the mundane tragedy of the world. Because a book cannot alter these forces, it can only do what all books with unhappy endings do: attempt to squeeze meaning from catastrophe.

It is worth examining the two plays Varoufakis invokes in his introduction and to which he returns throughout the text. The first is Shakespeare’s Macbeth, which Varoufakis calls on in order to argue that the players in his story, even the really wretched ones, all operated with the best intentions—their tragedy was that ambition necessarily leads those who act on it to bad ends. This is useful enough to a certain extent, but despite the critique in Jacobin, Varoufakis is at least superficially aware of the fact that it is not individuals and their flaws that drive history but rather the impersonal forces of money and power. Thus the second play he brings in, Oedipus. This ushers our well-intentioned Shakespeareans into a rigged world. It wouldn’t matter if they could only see their own character defects: Try to avert catastrophe, Sophocles tells us, and you invariably bring it about.

But it’s an odd comparison. While Adults in the Room surely ends with Greece’s ruin, the international conspirators Varoufakis wants to indict were never trying to avert that. For them, ruin would be the insolvency for their central banks. In order to prevent this disaster, they must destroy the welfare of the Greek people. They succeed. The world does not spring its trap, at least not on the central actors here. Maybe Varoufakis would have had better luck with different literary parallels, but I don’t think he would. The trouble is that stories require twists of fate and just deserts and motivated action. The world does not. In his story, a million small incentives allow the accidental heirs of global power to get precisely what they want. They begin on top. They end on top. They may have flaws, but it doesn’t matter. There’s no plot here but the slow, inevitable grind of deck chairs shuffling on an aggravated, unfair planet.

Perhaps he might have been less melodramatic about it all, but it’s hard enough to make anyone want to read so much about a forgone conclusion. You’ve got to attract attention. You’ve got to offer something even those sorts of readers not ordinarily inclined to buy a 500 page book by a former Greek finance minister can grab onto—but what does that look like? Perhaps, in the best case, something more subtle than this. But in every case it will be howling protest awkwardly shoehorned into the structure of high epic; that is to say, it will be something that power can roll its eyes at, while the major financial institutions carry on finding the next poor weak nation to take for all it’s worth.

Adults in the Room is an essential book and it is vital that books like it be written about each one of the injustices inflicted on the vulnerable by the present masters of the world. But this effort, in particular, is clumsy and these efforts, in general, are a stopgap at best. In 500 pages, you don’t learn much from Varoufakis about what he might have done differently, or how the Greek people could have won. I suspect that’s because he doesn’t know. That’s why he’s left banging on the ramparts with an uneven book. But more than a better book, I’d like a better leader, one who wins.

Emmett Rensin is a writer based in Iowa City, Iowa, as well as a contributing editor to the Los Angeles Review of Books.