Veteran Russian communist Dr. Slava Tetekin noted that Putin has been in power now for 18 years -- longer than Brezhnev had been. During that time he has presided over rising inequality and the destruction of Russia's industrial economy. This makes it all the more important to redevelop working-class mobilisation and to ensure that the current reawakening of enthusiasm for the October Revolution is converted into a wider political movement for socialism. 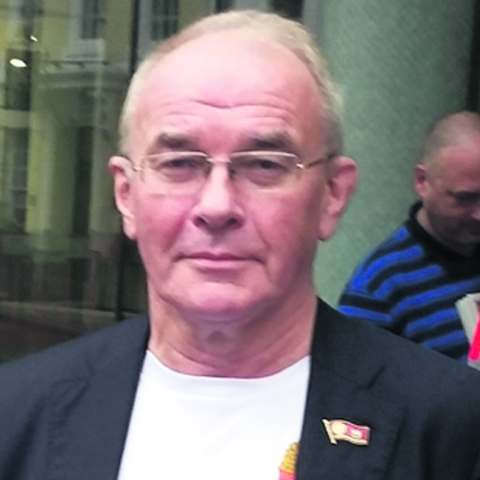 Asked about current support for communism in Russia, Dr Slava Tetekin, veteran member of the Communist Party of the Russian Federation, puts the figure at around 30 per cent.

Tetekin, recently in London for the celebration of the October Socialist Revolution, explained “our parliamentary representation fell significantly in the most recent Duma elections to just over 12 per cent — largely as a result of a rigged electoral system.

“But the daily sale of the communist-supporting Pravda is 80,000 and of Sovetskaya Rossiya 120,000. Particularly among the young and the better-educated, interest in our party’s policies and the achievements of the Soviet Union is increasing.

“This is because life,” says Tetekin, “is becoming increasingly difficult for all in Russia except the very rich. Real incomes have been declining for three straight years. Twenty-two million people are classified as living in absolute poverty — struggling to get enough to eat. Half the population is classified as poor.

“Yet people still remember that things were not always like this. Less than 30 years ago there was universal free healthcare.

“Education was free right through to university and so was childcare. There were full pensions. There was no unemployment. Housing, energy, transport and basic foods were heavily subsidised.

“There is also a growing awareness of the degradation of Russia’s economy. Russia’s manufacturing industries are virtually dead. The economy is almost entirely dependent on extractive industries that sell to the West: oil, minerals, natural gas.

“In 1990 the Soviet Union produced 1,000 aircraft. Last year we produced 50. Our airlines lease from the West. Our motor industry is entirely dependent on imported technology and components. The same applies even more to IT and computing. The technological base for the independent economic development has all but disappeared.

“These are some of the reasons why a new generation of Russians are looking again at their own history and particularly at period following the revolution. In 1917 Russia had a backward, largely agrarian economy. Within just 25 years the Soviet Union was outperforming Europe’s biggest economy, Germany, both in output and the quality of its technology. It was in large part for this reason that the Soviet Union was able to defeat Hitler fascism.”

Asked how he would describe Russia’s current government under Vladimir Putin, Tetekin denied that it should be seen as at all progressive.

“It is embedded in a layer of kleptocratic comprador oligarchs who are dependent on the West for the sale of their raw materials, for the banking of their money and for the technology needed for their operations in Russia. Immediately below Putin virtually all ministers are of this character.

“Putin,” he says, “has now been in power for a very long time. His 18 years exceed those of Brezhnev. It is remarkable how little challenge he offered to Nato and the US for the great bulk of that time, years that saw Nato’s eastward expansion into central Europe, the Balkans and the Black Sea. Russia even failed to oppose the invasion of Libya.

“It is only recently, in Crimea and in Syria, that Russia has set down markers against further US advance. This may reflect the directness with which the US was challenging Russia’s interests.”

But, says Tetekin, “there may well be other factors which we need to consider.

“These might include perceptions of a decline in the global power of the US, of a shift towards China and economic rivalries between the US and the EU.

“Russia sells seven times as much to Germany as it does to the US — and buys from Germany in the same proportion.

“In turn Germany’s own energy costs and international competitiveness against the US depend very significantly on Russian oil and gas. US diplomatic action to impede the construction of new gas pipelines from Russia to Germany and banking sanctions on oligarch companies match the increasing conflict between the EU and the US over steel quotas and corporate taxation.”

Joking, Tetekin says he would be all in favour of US sanctions against Russia if they covered technology and spare parts.

“It would force the Russian government to invest in the redevelopment of our productive economy.”

However, he adds, these rivalries also underlie attempts to promote a “democratic opposition“ in Russia similar to that funded by the US in Ukraine prior to the 2014 coup.

“It has a smaller potential base. It is impeded by its neoliberal ideology. Unlike the time of Yeltsin’s 1991 coup there are no illusions about free markets. Russians have seen them and know the consequences. But regime change is increasingly becoming a goal of the US administration.”

This, he says, makes it all the more important to redevelop working-class mobilisation and to ensure that the current reawakening of enthusiasm for the October Revolution is converted into a wider political movement for socialist change. The young are already leading the way.

[Dr Tetekin is currently chief policy adviser to the general secretary of the Communist Party of the Russian Federation, was a communist member of the Duma and previously played an active role in support for the anti-apartheid movement in southern Africa.]