Work at Amazon's distribution warehouses in Italy is backbreaking, and thousands of employees are part time and permanently on call. "It is a grim form of exploitation." 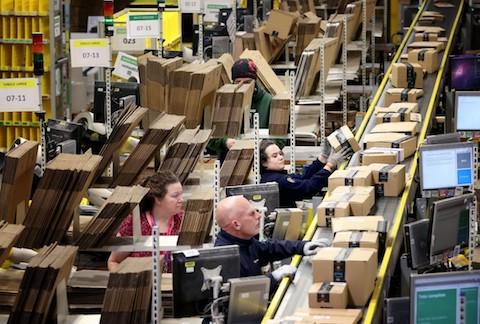 Amazon workers are striking in Italy, the first for the country and one of historical importance. This morning at 5 a.m., union leaders walked out of Mpx5, the giant warehouse in Castel San Giovanni, in the heartland of logistics in the Piacenza valley. While strikes at Amazon have been organized before, in 2015 in France and Germany, the Italians decided to start theirs on "Black Friday," an imported American term for a day dedicated to retail.

It is unlikely that this will bring the delivery system to a halt on Black Friday, as temporary workers, singled out by the green badges around their necks, will be called on to keep "the machine" in operation, having faced "pressures from the higher-ups" ever since Wednesday.

Their situation lies at the center of the claims of the workers who have decided to strike. "We want to let the company know that there is discontent, especially among those who are forced to work only at night, or almost on permanent call," says Beatrice, 26, from nearby Sarmato, one of the few unafraid to speak out. She has worked at Amazon since 2012, with a permanent contract only since 2016.

"We, the permanent workers from before the 'Jobs Act,' are like holdovers from another time," says Alessandro (not his real name). "We are few and we are already physically broken."

There is such flexibility at the Castel San Giovanni hub that even the number of employees is uncertain. If the permanent workers (mostly hired at the time of the Jobs Act) are about 1,650, the number of temporary workers, selected and hired through the temporary employment agencies Adecco, Manpower and Gi Group, is fluctuating -- it should be around 2,000 -- and increases over the Christmas period.

"Many are hired specifically for the night shift [from 10 p.m. to 6 a.m., while the morning shift is from 6 a.m. to 2 p.m. and the afternoon shift is from 2 to 10 p.m.]," Alessandro continues. "And almost all the others are on MOG contracts [the Italian acronym for "Total Guaranteed Hours"], which, in theory, should be three days part-time, but in reality becomes work on permanent call. Superiors tell you, 'It would be best if you could come,' and then the next day they praise you because you agreed. In short, it is a grim form of exploitation."

First opened in 2011, the Piacenza regional hub did not have unions until this year. "We were able to hold meetings with a total of 500 workers," Fiorenzo Molinari of FILCAMS CGIL explains, "and to present a proposal for a supplementary contract. But the company still did not respond, and it was time to let it know that we want deeds, not words."

Today's strike, proclaimed by FILCAMS CGIL, FISASCAT CISL and UILTUCS, together with the temporary workers' unions FELSA CISL, NIDIL CGIL and UILTEMP, is also aimed at improving the condition of temporary workers, and calls for "a halt on irregular working hours until the end of the year," a year that has been the most profitable for the company and the hardest for the workers.

The difficulty of the work required is the other major grievance of the employees. Divided into pickers, who sort the packages with scan guns, packers, who package the products, and the shipping division, the hardest task is undoubtedly that of the pickers.

"You walk as much as 17 km in a day," Beatrice says. "You're always on the move and you're bending your back all the time. I have many co-workers with musculoskeletal disorders in the joints, but no one is able to obtain recognition of their occupational diseases because the company is putting off the medical visits for certification."

"After five years of this work, you're not good for anything anymore. Many of my colleagues have left and claimed their severance pay," Alessandro recalls. Molinari said that "severance pay leads to a very high turnover rate, which the company is managing by keeping the cost of labor low."

The workers at Castel San Giovanni are actually enjoying better contractual terms than those working in the two new hubs opened by Amazon.

"They have the standard service contract, and a permanent full-time position makes [euro]1,450," says Massimo Mensi, who represents FILCAMS in the international alliance of unions of Amazon workers. At Passo Corese, a warehouse that just opened near Rieti, and at the one which is about to open in Vercelli, the company will apply the national logistics contract to employees, which is significantly worse. In Europe, we have a common aim: to be able to bargain with the company. But no one has succeeded so far."

Originally published in Italian on November 24, 2017https://ilmanifesto.it/amazon-via-allo-sciopero-siamo-rotti-e-sfruttati/
Subscribe to Portside