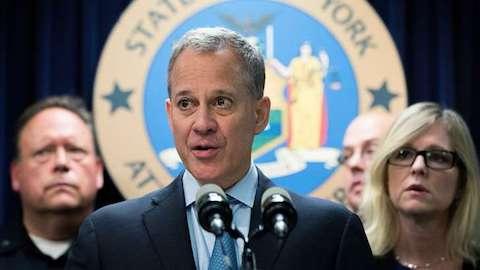 In an open letter to Federal Communications Commission Chairman Ajit Pai, Schneiderman said the agency hasn't provided him with information "critical" to an investigation his office is conducting.

Schneiderman said in a tweet his office has been investigating a "massive scheme" over the last six months to "corrupt the FCC's comment process on net neutrality by impersonating 100,000s of real Americans."

Over the last 6 mos, my office has investigated a massive scheme to corrupt the @FCC's comment process on #NetNeutrality by impersonating 100,000s of real Americans.

The FCC has been unwilling to provide information that is critical to the investigation:

In the letter, Schneiderman wrote that the process the FCC has "employed to consider potentially sweeping alterations to current net neutrality rules has been corrupted by the fraudulent use of Americans’ identities — and the FCC has been unwilling to assist my office in our efforts to investigate this unlawful activity."

His letter comes after Pai announced on Tuesday that the FCC will vote to roll back Obama-era net neutrality rules that require internet service providers to treat all web traffic equally.

Pai in a statement blasted the rules as "heavy-handed, utility-style" regulation of the internet imposed by Democrats.

Schneiderman's letter continues: "Specifically, for six months my office has been investigating who perpetrated a massive scheme to corrupt the FCC’s notice and comment process through the misuse of enormous numbers of real New Yorkers’ and other Americans’ identities.

"Such conduct likely violates state law — yet the FCC has refused multiple requests for crucial evidence in its sole possession that is vital to permit that law enforcement investigation to proceed."

Schneiderman wrote that his office found tens of thousands of New Yorkers may have had their identities "misused."

He said in June 2017 his office contacted the FCC to request records relating to its public comment system. He said his office made the request for logs and other records at least nine times over the past five months and had asked multiple top FCC officials for assistance.

"Yet we have received no substantive response to our investigative requests. None," he wrote.

"We all have a powerful reason to hold accountable those who would steal Americans’ identities and assault the public’s right to be heard in government rulemaking," the letter said.

"If law enforcement can’t investigate and (where appropriate) prosecute when it happens on this scale, the door is open for it to happen again and again."

Schneiderman encouraged the FCC to reconsider its "refusal" to help his office's law enforcement investigation "identify and hold accountable those who illegally misused so many New Yorkers' identities to corrupt the public comment process."

"In an era where foreign governments have indisputably tried to use the internet and social media to influence our elections, federal and state governments should be working together to ensure that malevolent actors cannot subvert our administrative agencies’ decision-making processes," he wrote.