An Illegitimate Capital for a State Without Legitimacy

It should come as no surprise that Donald Trump has declared that the US is recognising Jerusalem as the capital of Israel. For seasoned US-Israel watchers, it merely confirms what we have been saying for decades: Washington is no honest broker in negotiations to end the Palestine-Israel conflict. 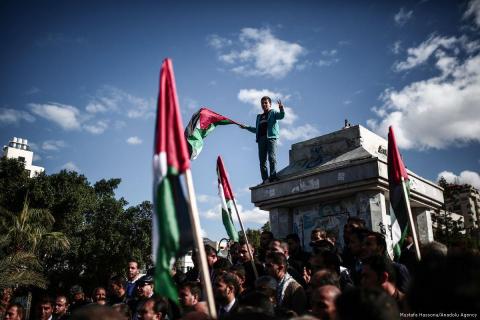 Demonstrators shout slogans and hold Palestinian flags during a protest against the US President Donald Trump’s recognition of Jerusalem as Israel’s capital, on 7 December 2017 in Gaza City, Gaza,Mustafa Hassona/Anadolu Agency

Quite the opposite, in fact; it has ensured that the odds have been stacked in Israel’s favour and turned a blind eye to its contempt for international law — which Trump clearly shares — even while its brutal military occupation has stolen ever more Palestinian land throughout the seven decades since 1948.

US recognition of Israel’s self-declared capital has no legal basis. The 1947 UN Partition Plan for Palestine, upon which Israel largely bases its international legitimacy, had three components: “Independent Arab and Jewish States and the Special International Regime for the City of Jerusalem”. Only one of these has come into being, primarily because Israel and its backers haven’t allowed the others to happen. What’s more, although the borders of the “Arab and Jewish States” were set out clearly by the UN, Israel took possession of more than its allocation, including West Jerusalem. It took the rest of the city in 1967 along with the remaining land designated for the “Arab State”, and went on to annex the Holy City; this has never been recognised by the rest of the world and, legally, Jerusalem remains “occupied territory”, as do the West Bank and Gaza Strip.

Trump’s move on Jerusalem: Is this the end of US diplomacy in the Middle East

Hence, if we are to be accurate, whenever we discuss the Israeli occupation, this should refer to the West Bank, Gaza Strip and other land now accepted to be part of Israel which it has occupied since the 1949 Armistice. While paying lip-service to the UN Partition Plan for its own legitimacy, Israel continues to ignore the terms of the resolution in almost every respect. A glance at the “Disappearing Palestine” maps confirms this unpleasant fact on the ground.

Ignoring the UN is the norm for Israel; it has violated 28 UN Security Council Resolutions — which are supposed to be binding on UN member states — and ignored at least 40 non-binding General Assembly Resolutions. There is a strong case for throwing Israel out of the UN, given such a record and the fact that its membership in the first place was dependent on allowing Palestinian refugees to return to their homes. This has never been permitted by Israel, and the UN has been unable or unwilling to enforce the will of the international community.

In part, of course, this is because of the diplomatic protection given to Israel by the United States, which has used its veto in the Security Council to block resolutions critical of Israel at least 40 times since 1972. It also reflects the impotence of Europe in the face of whatever power the pro-Israel lobby has over its politicians. European guilt over the Holocaust, perhaps? Or something more mundane, such as electoral influence and donations? Or maybe a combination of the two.

Whatever it is, we can’t pin the blame entirely on Trump and the US; European complicity has also played a role in allowing Israel to act with impunity, as has the collaboration of the Palestinian Authority in what President Mahmoud Abbas has called its “sacred” security cooperation with the occupying state. Indeed, as is now becoming clear, it seems as if major Arab countries have been involved in their own, under the radar, collaboration with Israel by establishing now very open links with the Zionist state.

It is hard to know at the moment if Trump actually understands what impact his move on Jerusalem will have on the people in the region. None of us knows for certain, of course, but it doesn’t take a genius to work out that the prospects for a just peace are now even more remote. A peace of sorts could be imposed by brute force, no doubt, but it would never be based on justice; and it would never last.

Do the US President and his right-wing supporters care about this? Probably not. America’s Christian Zionists largely back him to the hilt, and they aren’t interested in peace; they see the establishment of the state of Israel and the “incoming of the exiles” (the Jews) as an essential prelude to the second coming of Jesus and “the rapture”; ultimately, in fact, the end of the world. The late Grace Halsell explained this thinking in her 1999 book “Forcing God’s Hand”. Israel exploits this through its lobby groups around the world to gain political, military and economic support.

What was Trump thinking? Simple. Why delay the inevitable?

What effect will Trump’s declaration have on the Palestinians for whom Jerusalem is home? Will Israel complete the ethnic cleansing of the city by forcing them out and bringing their complete ethnic cleansing a step closer? With the US watching its back, it is perfectly feasible that the far-right government of Benjamin Netanyahu will feel emboldened enough to do this.

Another option would be for the Jerusalemite Palestinians to be offered Israeli citizenship, but that would upset those who already see Israel’s 20 per cent non-Jewish citizens as a democratic threat to the “Jewish State”. The likelihood, therefore, is that Israeli Apartheid will simply be entrenched further and those Palestinians left in occupied Jerusalem will face yet more discrimination at the hands of an overtly racist government.

Pro-Israel lobbyists are forever bleating that the campaign for justice for and by the Palestinians seeks to “de-legitimise” the state, but they have yet to explain with any credibility the validity of its credentials; in truth, there is none. Israel’s latest poodle in Washington has now recognised an illegitimate capital for a state without legitimacy.

Moreover, Israel has become a rogue state par excellence; not only is its star rising— for now — but it has also been incredibly successful in convincing the major powers in the world that it is the innocent victim in all of this. However, it is no longer surrounded by hostile states; the “self-defence and security” excuse for its vile occupation and military offensives against Palestinian civilians is unravelling as Saudi Arabia and the UAE join Jordan and Egypt in tying their camels and putting their trust in Tel Aviv.

Israel is ticking the boxes on its wish list. The battle for Jerusalem appears to have been won. After incessant Jewish colonial-settler incursions into the Noble Sanctuary — which will be viewed in the future as its initial skirmishes — the battle for Al-Aqsa Mosque, the heart of the Palestinian and Muslim presence in the Holy Land, may well be about to start in earnest. Recognition of Jerusalem as Israel’s capital is just the beginning. The next target will be to occupy and demolish Al-Aqsa and the Dome of the Rock Mosques and build a temple in their place. The blueprints for this are already prepared.

With the villain of the piece portrayed as the victim — poor little Israel — and those with international law and justice on their side demonised as wrongdoers, the days of the False Messiah may well be upon us. Anyone for Armageddon?