“This is a real tragedy, and it’s one that’s backed up by sound statistics and sound science that lays out how important of a calamity it is." 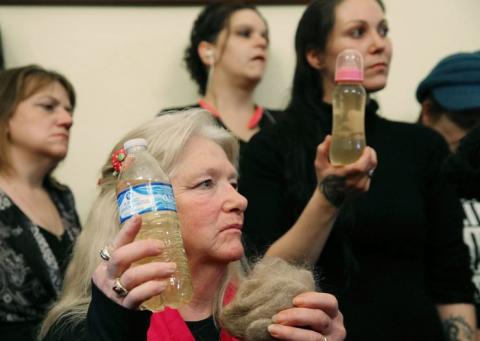 While official accounts point to lead levels decreasing in Flint since the city switched its water source back to Detroit water, the lead levels of children in Detroit are even higher than in Flint, according to the Detroit News. , Mark Wilson/Getty Images

Babies born in Flint, Michigan, following the water crisis that started three years ago weighed less than they likely would have if the crisis had never happened, a new study has found.

Authors Rahi Abouk of William Paterson University and Scott Adams of University of Wisconsin – Milwaukee examined birth outcomes in Flint in the early stages of the water crisis in a peer-reviewed study.

“We were surprised we found something,” Adams told Rewire, given the brief period of the water crisis. “It was a very sharp reduction in birth weight, probably a bit more than I anticipated.”

Comparing birth data from 2005 to 2015, the researchers found an average 71 gram reduction in birth weight and a 26 percent increase in the incidence of low birth weight among children to white mothers. Despite the reduction in birth weight for infants of Black mothers, the researchers could not verify the numbers were statistically different than what would have occurred without the water change. They attribute this to stressors, such as the lead contamination, economic hardship, and access to maternal health care, likely being at higher levels among Black residents in Flint.

“Although lead readings were spread evenly throughout neighborhoods, the stressors associated with being a Black resident in Flint were already at higher levels. Given this, there might be a limited observable effect among infants of Black mothers because they were already experiencing adverse birth outcomes from various stressors,” the report reads.

Flint is the poorest community in the United States, with a majority of its population Black and low income. A study released early this year suggested the water crisis could not have happened in whiter, wealthier cities. The recent crisis added to, and was exacerbated by, Flint’s history of environmental disasters and political dysfunction.

The findings come on the heels of a working paper stating fetal death rates jumped by 58 percent and fertility rates dropped by 12 percent in Flint since the lead contamination came to light.

Researchers David Slusky from the University of Kansas and Daniel Grossman from West Virginia University compared Flint’s health records with 15 other Michigan cities in the study. State officials dismissed the findings.

Slusky told Rewire last week that he is pleased to see others examining the effects of the tainted water. “We are glad to see other researchers looking at this important issue and find it reassuring that their results are broadly consistent with ours despite using different methods,” he said.

The crisis began in April 2014 when Flint, then under a state-appointed emergency manager, switched its drinking water source from Lake Huron water treated by the Detroit water system to Flint River water treated at the Flint Water Treatment Plant. The required anti-corrosive treatments were not used to treat the Flint River water, leading the water to leach lead from pipes.

Flint switched back to the Detroit water system last October but the water distribution system was already damaged. Water bills in Flint remain the highest in the country, many remain without clean drinking water, some say the tainted water is causing them to miscarry, and many feel public trust has been eroded in the city of about 100,000.

Researchers said they hope their work will refocus the lens on the huge crisis Flint is facing.

“Any light that can be shed on what a human tragedy it is and how we have not reacted swiftly or fast enough to the plight of Americans, and how dire the situation was and continues to be is, I think, important,” Adams said.

Rahi and Adams plan to revisit their study to compare results.

“We hope that these reports help policymakers make informed decisions about the consequences of their actions and helps spur future work and greater understanding of the effects of the Flint water change on the health of the citizens of Flint,” Slusky said.

While official accounts point to lead levels decreasing in Flint since the city switched its water source back to Detroit water, now known as the Great Lakes Water Authority, the lead levels of children in Detroit are even higher than in Flint, according to the Detroit News. Blood lead levels are also elevated statewide.

Pressure from the crisis is now forcing Michigan officials to consider what could become the strictest lead water rules in the United States, according to Michigan Public Radio. But Republican Gov. Rick Snyder, who has been blamed for not adequately addressing the Flint water crisis, has called the federal Lead and Copper Rule “dumb and dangerous.”

In place for more than 25 years, the EPA rule provides for control and monitoring of the levels of lead in drinking water as exposure may cause health problems ranging from stomach distress to brain damage. Children are especially susceptible as lead can affect their brain development, behavior, and can result in anti-social behavior, anemia, hypertension, and toxicity to the reproductive organs. Lead in a pregnant person’s blood can affect embryo development, according to the World Health Organization.

Dr. Daniel Grossman, who studies reproductive health and is a professor at the University of California, San Francisco, told Rewire that this is an important study but that more time and research is needed to fully understand the effects of what is happening in Flint. Dr. Grossman is a medical doctor and not the author of the same name of the Flint study referenced above.

“This very rigorous study suggests that birth weights decreased after the Flint water crisis, particularly for white women. The study does not tell us why birth weight has decreased, but it may be due to lead exposure, stress, or something else. More in-depth research is needed in this community to understand the cause of this adverse birth outcome,” he said. “It may be years before we know the full public health impact of the Flint water crisis. It’s critical that rigorous research be done to understand how the health of the people living in these communities has been affected by this tragedy.”

Where once public officials dismissed citizen accounts of how bad the water tasted and smelled, studies are now providing irrefutable proof of the harm it has done. The problem is more widespread than anyone could have imagined.

Beyond the 71 water systems in Michigan that have recorded higher-than-Flint lead levels, a Reuters investigation found that children in nearly 4,000 communities across the United States have recorded lead levels more than twice those found in Flint at the height of the crisis.

“This is a real tragedy, and it’s one that’s backed up by sound statistics and sound science that lays out how important of a calamity it is,” Adams said. “We want to not only shed a light there but also to let people know there are these tragedies waiting to happen and we cannot ignore the human toll that they will have.”

Auditi Guha is the race and justice reporter for Rewire. She has uncovered corruption, injustice, discrimination and fielded death threats in her career from India to Boston. She most recently worked at The Standard-Times in New Bedford and was previously a crime reporter for The Cambridge Chronicle and Somerville Journal where she was one of 12 national Guggenheim criminal justice fellows in New York in 2012.

Appreciate our work? Rewire is a non-profit independent media publication. Your tax-deductible contribution helps support our research, reporting, and analysis.