As the ANC Meets: Whither South Africa’s Historic Liberation Organization

This weekend the African National Congress will choose a new president to replace Jacob Zuma, but all of the contenders have been, in varying degrees, complicit in Zuma's corrupt rule. While one needs to be cautious before suggesting an organization that has been at the center of freedom struggles for over a century will disappear, it is equally difficult to imagine the ANC ever regaining the moral stature and trust it once enjoyed, whoever is elected to lead the ANC. 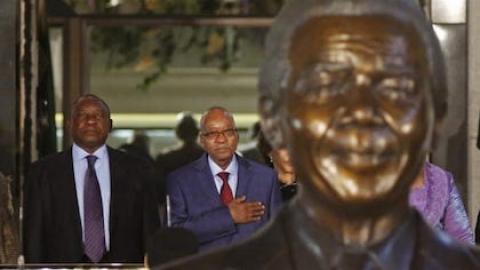 These days, the media seem to be reporting continuously on a single subject: the governing ANC's 54th national conference that is expected to be held in Johannesburg from December 16 to 20. The coverage of the upcoming conference is mostly focused on what journalists simply call "the race", referring to the election of a new ANC president.

There are daily media reports on how many delegates appear to have pledged their support to one or the other candidate for the position which President Jacob Zuma is due to vacate. Zuma's term as state president is due to end in 2019, unless he is removed, for one of his many misdemeanours, before that term ends.

When the ANC held its first official conference in 1991, following a 30-year ban that forced the party to operate illegally, it was simply called a "national conference". But today, it is widely described as an "elective conference". By changing the description of the conference, the media is echoing the ANC's preoccupations and reducing party politics to discussions on who gets elected to this or that position.

Back when the party was illegal, and involvement in the ANC was dangerous, people gained little by being part of the leadership in the party. But today, what position people hold in the party relates to the amount of power and resources they and their associates acquire or control.

The ongoing contest for access to resources, which come with holding an elected post within the ANC, has resulted in some people resorting to illegality, violence and even murder. Extensive litigation has also arisen from disputes over the elections of executives for provinces and branches.

For example, in the case of KwaZulu-Natal, the province with the largest ANC membership, a leadership that has been declared illegal by a court has continued to oversee the election of branch delegates for the national conference. This and similar developments in other provinces may have legal and political consequences that endanger the conference itself. The conference may be cancelled or cut short if accreditation of participating delegates is repeatedly questioned.

Zuma and his loyal supporters may also cause the conference to collapse. The main contest in the conference will be between those who support the incumbent president and those who, while deriving from the same leadership, are less reliable. Zuma wants a trouble-free retirement. He wants to hold on to his wealth, however acquired, and he wants to avoid prosecution. And to achieve this goal, he needs to transfer control of the party to his loyal supporters.

If the Zuma-supporting forces sense defeat, they may take illegal steps to ensure that the conference does not take place. That is not difficult to achieve, as individuals who have been vetted for loyalty to Zuma will be in charge of security at the conference. There are numerous ways of "sinking" the conference, short of outbreaks of violence already seen in some provincial or branch elections. The party's computer system could be damaged, making it impossible to accredit delegates. The venue can be made unusable in multiple ways - by flooding, inflicting damage or even dumping faeces (now a fairly common form of protest). It would be logistically difficult to find and speedily transport 5,000 delegates to a new venue.

Much blood has been shed in recent years as result of intra-ANC violence relating to elections. Candidates or councillors have been attacked, injured or even murdered. The conflict is generally described as "factional". This may be true, but these days the "factions" in the ANC do not represent political tendencies or ideologies. Instead, they represent people loyal to certain individuals or even criminal networks.

It has not always been like this. In the past, divisions in the party were mostly related to ideological differences, as with the breakaway of the Pan Africanist Congress in the late 1950s. There were other factional splits and differences, but these were also related to broad issues like the relationship between race and class, socialism and national liberation, or the resort to armed struggle.

Given the ethical corrosion of the ANC and its descent from an organization with a thriving political inner life into violent and criminal practices, can it recover?

One needs to be cautious before suggesting that an organisation that has been at the centre of struggles for freedom for over a century will simply disappear. But it is equally difficult to imagine the ANC ever regaining the moral stature and level of trust that it enjoyed when the ban on its activities was lifted in 1990.

The future of the ANC is not assured, and even if it survives this conference, it will remain a deeply fractured organization. There is no leader or group of people with a vision that unifies its members or attracts the enthusiasm of ordinary citizens. All of the candidates for the ANC presidency were complicit in Zuma's rule and advance scrappy, uninspiring alternatives. None of these evokes a sense of excitement that once surrounded the ANC.

But there are many who are hoping that this gloomy prognosis is proved wrong. Business leaders long for stability, and many believe the conference may deliver a level of political certainty that would make this possible.

Many ANC veterans and other well-meaning citizens believe that if Cyril Ramaphosa, current deputy president of the ANC and the country, were to be elected, the fortunes of the country could be turned around. Ramaphosa has been a successful businessperson and is credited, possibly with some exaggeration, with knowing how to "fix things up".

Some, like dismissed finance minister, Pravin Gordhan, even suggest that Ramaphosa, if elected ANC president, would be able to remove Zuma as state president, but that is not easy to do. What all those who vest so much in Ramaphosa ignore is that Zuma remains president of the country and is impervious to a sense of honour.

When Thabo Mbeki, the second post-apartheid president of South Africa, lost the support of the ANC leadership, he resigned as state president. But Zuma fears prosecution for fraud and other crimes. He will not follow Mbeki's lead and simply walk away from power, as long as these charges loom over him. It may also be that if Ramaphosa is elected, he will not have a substantial majority to back such actions.

Some suggest that a package deal, similar to that offered to Zimbabwe's Robert Mugabe, could see Zuma go quietly. But there are doubts about the legality of such a deal. Many who respect the law and the constitution do not want to allow Zuma to hold onto his ill-gotten gains or be exempted from prosecution.

South Africans want a democratic state, run on the basis of the existing constitution. But South African democracy cannot be restored through deals behind closed doors. It requires re-empowering the citizenry, who have been so badly betrayed. That may be a difficult task, entailing listening to one another in order to rebuild democratic organisation. That will not be achieved overnight.

[Raymond Suttner, based in Johannesburg, is a scholar and a social and political analyst. He was actively involved in the liberation struggle against apartheid, both in legal political activities and illegal underground work. He served two periods of imprisonment and after release in 1988 was under house arrest, totalling 11 years.

At one point he was in the leadership of the African National Congress, South African Communist Party and the United Democratic Front. Currently he is in disagreement with the directions taken by the ANC/SACP alliance and the ANC-led government, for reasons that are addressed in this blog.

He has published Inside Apartheid's Prison, 2001 (UKZN press and Ocean Press, which was runner up for the Alan Paton prize), The ANC Underground, 2008 (Jacana, and 2009, Lynne Rienner). Together with Jeremy Cronin he wrote 30 Years of the Freedom Charter (Ravan Press and Ohio University Press, 1986), banned for possession by the apartheid government and 50 Years of the Freedom Charter, 2006 (UNISA Press) and Recovering Democracy in South Africa was published by Jacana media in 2015, with a US edition published in hardback by Lynne Rienner.  Inside Apartheid's Prison was reissued in 2017, with a new introduction reflecting on the political choices that lead Suttner to pursue his political convictions outside of the ANC and SACP.]