For delegates in Bonn from Nov. 6-17, the goal was to define and firm up terms and goals of the Paris Agreement, drafted with much fanfare at COP21 in Paris in 2015. 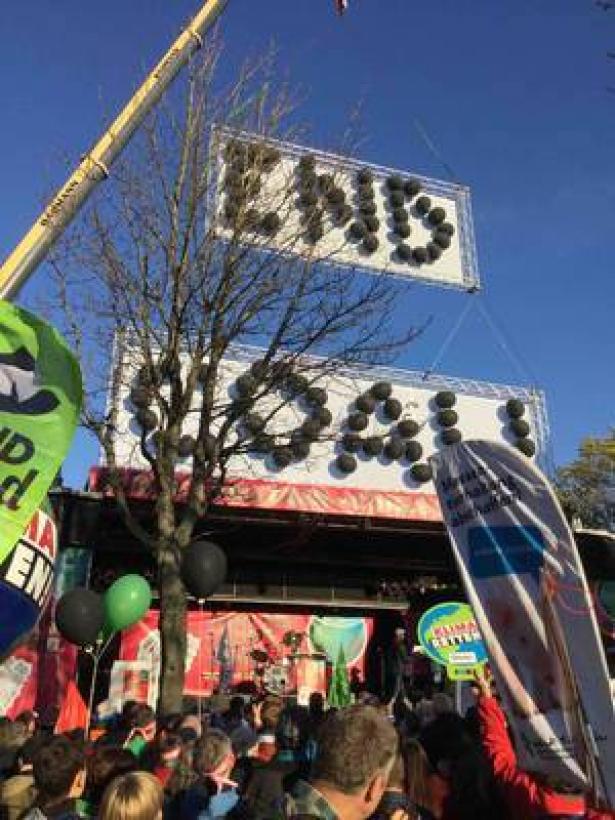 The long trip from Wendell, Massachusetts back to the Rhine River put me at the center of world discussions on climate. Bonn, former capital of a divided Germany, was my home base for decades. Now, thanks to the Traprock Center for Peace & Justice and other supporters, I could attend the 23rd ‘conference of the parties’ of the United Nations Framework Convention on Climate Change, known as COP23.

My goal was to witness this history, and report back. Not from the conference itself – check out the excellent reporting at Democracy Now! for that  --  but outside, attending meetings and actions of those demanding and working for strong action for climate protection and climate justice.

And their voices definitely made a difference in both the outcome of the COP23 -- and discussion in Germany, where both public opinion and political parties had to focus on the reality that their own climate goals were not being reached.

For delegates in Bonn from Nov. 6-17, the goal was to define and firm up terms and goals of the Paris Agreement, drafted with much fanfare at COP21 in Paris in 2015. There participating countries agreed to voluntary goals to limit the increase in global temperatures to 1.5 degrees Celsius (2.7 degrees Fahrenheit) above pre-industrial levels and below the even more dangerous 2 degrees Celsius (3.6 degrees Fahrenheit).

Although the agreement is widely acknowledged as being too weak and as is, will keep us on a climate collision course, it has now been signed onto by all countries -- except ours. Perhaps a bright note is that official US withdrawal from the agreement will not be in force until November 4, 2020, the day after the 2020 elections. (Another reason why climate should finally become a major political issue in the U.S.)

As COP23 opened, the World Meteorological Organization reported that 2017 was on its way to being one of the three hottest years on record.

Islands from Puerto Rico to Tuvalu are especially vulnerable to global warming, rising ocean levels and devastating storms. At this COP, front-line island nations of the world had a major voice, as Fiji, one of their own, was the conference president. However as this archipelago of more than 330 islands in the south Pacific, already a victim of major storms, lacks the logistics to welcome some 22,000 delegates and others, the summit is took place in Bonn, home to the UN climate change convention secretariat.

For activists from communities opposed to nuclear energy and its radwaste - some for decades, to the recently formed 'GAStivists' who see no diffference between reliance on 'conventional' and 'fracked' gas ("it's all methane, and a climate killer"), to the indigenous people whose culture and livlihoods are threatened by climate change and 'extractivist' policies of endless growth, the slogans were loud and clear: "System change not climate change," and "Climate Justice - Now!"

This opposition set the tone for the climate conference before its official opening on November 6. From November 3 to 7, hundreds of people, mainly young and from European countries, gathered for a People's Climate Summit to discuss and hear from experts and affected people around the world, as they described climate disruption in their home communities and countries, and steps taken to counter it.

There were great workshops and panels, translated in from two to four languages, a raft of studies and literature, and a major demonstration on Saturday, November 4th, that brought 25,000 people into the streets of Bonn, 3,000 in a bicycle parade. It was the biggest climate march yet in Germany.

There "END COAL" was spelled out in bobbing black balloons on a giant banner behind the stage. International speakers addressed many climate and justice related themes, but a major focus was the hypocrisy of German energy policy. Although known around the world as a leader in renewable energy, Germany is in fact a major emitter of CO2, and dedicated to mining the dirtiest form of coal: brown coal, or lignite. 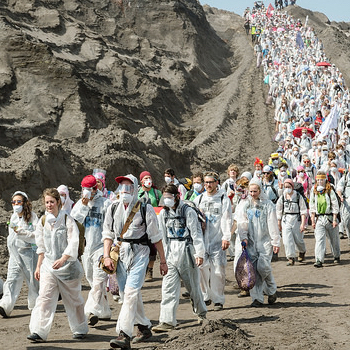 After months of careful planning, on the day after the demo, 4,000 people went to the site of Germany's biggest surface mine - a moon-like landscape of devastation just 50 kilometers north of Bonn. In the largest civil disobedience action against the largest CO2 emitter in Europe, 3,000 people were able to get on the site and shut it down for the day. The action was seen in living rooms across the country and helped make the crucial exit from coal a major topic in the political talks around formation of a new coalition government, which are going on parallel to the climate negotiations.

As the second week of the conference began, the Global Carbon Project announced that CO2 emissions for 2017 would increase by 2%, after two stable years.

At the close of the conference, the Climate Change secretariat put out an optimistic summary of what happened at the conference (Concrete Climate Action Commitments at COP23), giving an idea of the many issues involved. On December 12th, French President Emmanuel Macron followed up with a 'One Planet Summit' of government leaders, to spur action on the 2015 Paris Agreement. The next COP (24) is scheduled for Katowice, Poland, in December 2018. (Civil society and climate activist evaluations of the Bonn COP23 will be the subject of another article.)

For more information on some of the current energy and climate, political and social topics discussed in Bonn, here are some of the excellent resources I collected, also on their own page:

For extensive research on coal world-wide by the German Green Party's Heinrich Boell Foundation, Friends of the Earth International, and the German FOE partner BUND see: Coal Atlas at https://www.boell.de/en/dossier-coal-atlas-facts-and-figures-fossil-fuel

Food and Water Europe have many resources on gas and fracking, and I learned a lot from: The Trans-Atlantic Plastics Pipeline: How Pennsylvania's Fracking Boom Crosses the Atlantic On "how America's oil and gas rush is now coming to Europe, polluting both sides of the pond, contributing to climate change and threatening coastal wildlife."

CLIMATE CONFERENCE NEGOTIATIONS: The Third World Network has updates from all meetings at https://twnetwork.org/meeting/bonn-climate-change-conference-nov-2017

CLIMATE JUSTICE: ITTAKESROOTS.ORG "is a multiracial alliance of alliances bringing together 150 organizations in 30 states nationwide & in Canada." It includes the Climate Justice Alliance, Indigenous Environmental Network and the Grassroots Global Justice Alliance.

**  See the many reports in English from the Rosa Luxemburg Foundation (assoc. with the German Left Party) at: https://www.rosalux.de/en/dossiers/climate-justice/cop23-in-bonn/