Just cause — a legal right to your job — should be an essential part of any package of reforms to restore workplace dignity and fairness. 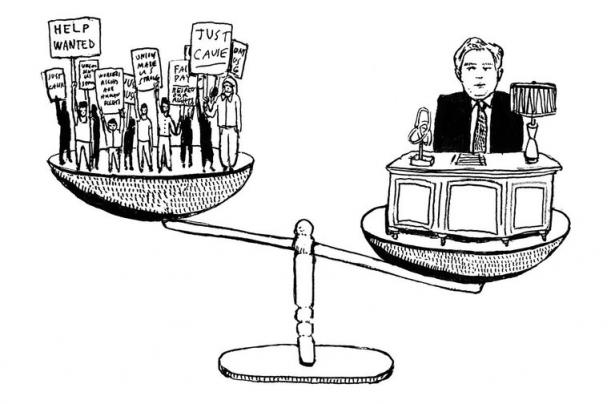 Maybe we should thank Joe Ricketts for closing his Gothamist and DNAinfo websites in petty retaliation for the writers’ vote for a union. Or maybe the NBC News executives who turned a blind eye to Matt Lauer’s harassment of female colleagues until the #MeToo movement empowered enough of them to make their complaints too official to ignore. Or the federal contractor that fired a bicycle-riding employee who flipped off the president’s motorcade, a gesture captured in a photo that went viral.

These bosses revealed that a workers’ rights system that is applied unequally to only some workplaces and only some employees is no way to ensure that everyone’s rights are respected. Workers may have the right to do their jobs free from sexual harassment and assault, but it has become increasingly clear that employers violate those rights by exploiting the power disparity in the workplace.

Similarly, workers may have a right to organize a union and collectively bargain, but in reality workers are often fired for organizing, and the laws against such practices — like all protections against unfair terminations — place the burden on employees to prove illegitimate intent.

Bosses hold all the power in the at-will employment system that most American workers are subject to, under which they can be fired for “good cause, bad cause or no cause.” Employees who speak up risk everything — their jobs, their reputations, their livelihoods — while facing the unfair legal burden of having to prove their boss’s intentions. Until workers have the freedom from unfair firing, too many workplace rights will remain unfulfilled.

The alternative to at-will employment is “just cause,” which is the principle that an employee can be fired only for a legitimate, serious, work-performance reason.

A just-cause rule would give workers greater freedom to say no to requests that have nothing to do with their jobs, like “Can you pick up my dry cleaning?” or “Come up to my hotel room.” It would provide workers more power to resist unfair schedule changes, like an attempt to cancel a preapproved vacation. It would allow workers to resist mandatory overtime presented as voluntary. It would firmly place the burden on an employer to show that the reason it fired an employee had nothing to do with, say, the sick day she took to care for her child or the memo she wrote to complain about a powerful co-worker making sexual advances (three-quarters of women who have filed sexual harassment claims at work experience retaliation, according to one report).

The idea for a just-cause law is not novel. It is the norm in most democracies around the world, and our law reviews are filled with arguments in favor of it. Years ago, for example, Montana passed a wrongful discharge law that offers significant, though not complete, protections for many employees.

We are at a time in this country when just cause may be a necessity. Employers have become increasingly adept at violating workers’ rights with impunity. And the judiciary, which is responsible for determining employers’ intent in discrimination cases, is increasingly filled with “originalists” like the new Supreme Court justice Neil Gorsuch, who are inclined to side with employers and to believe that workers have no right to break a rule even if their lives depend on it.

Senate Democrats have indicated a willingness to propose bold solutions for restoring a balance of power between workers and corporations as a part of their “Better Deal.” Their labor bill would ban “right to work” provisions, which permit workers who are represented by a union to pay nothing for that representation; restore workers’ right to engage in solidarity activism; and expand the National Labor Relations Act to cover public-sector as well as private-sector workers and create financial penalties to bosses who willfully break the law.

If the bill had passed 40 years ago, it might have prevented our current age of vast inequality. The prevalence of outsourcing, subcontracting and other union-avoidance business strategies make it pretty clear that employers would continue to evade and sabotage any system of labor rights that is tied to an individual employer, rather than one that applies to all employers.

We need a law that protects and empowers workers to speak out to ask for raises, to combat sexual harassment, to complain about unsafe working conditions and, yes, to join unions.

Just cause — a legal right to your job — should be an essential part of any package of reforms to restore workplace dignity and fairness.

Thanks to authors for sending this to Portside.