Unions in Canada suffered some setbacks in 2017. However, movements like the Fight for $15 and Fairness show a potential way ahead. In 2018, those looking to renew the labor movement need to build power from below, encourage greater membership involvement, forge international solidarity, and confront governments, even those that are ostensibly friendly. 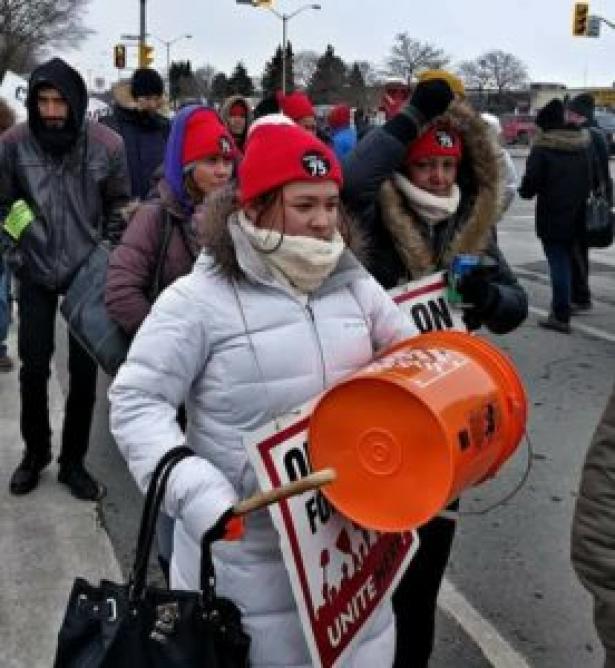 The Canadian labour movement achieved some significant victories in 2017 but there are still major challenges on the horizon.

The success of the Fight for $15 and Fairness campaign is a victory that will be studied for years. Activists built a diverse and bottom up movement that included and built the capacities of many minimum wage workers. The result was the quickest phase-in of a $15 minimum wage in North America so far and important changes to labour law in Ontario granting paid sick days, equal pay for equal work and fair scheduling.

The Fight for $15 and Fairness was also there to help food service workers at York University claim victory in their strike. Combatting racism and Islamophobia has also been a major part of the campaign giving many minimum and low wage workers who are disproportionately people of colour, the confidence to fight for dignity at work and has been out protesting the rise of white supremacist groups in the wake of Trump’s presidential victory.

The Fight for $15 and Fairness is a wonderful example of why campaigns within the labour movement need to be a broad social movement and sink roots into communities. Other Fight for $15 movements will be important across the country in advancing working class politics from Quebec to British Columbia.

While the #MeToo campaign initially focused on Hollywood, there were many articles written about the sexual harassment and assault that working class women face. Between this increased awareness as well as protections for leave for domestic and sexual assault survivors in Ontario’s Bill 148, there is a significant opportunity in 2018 for the labour movement to advance an agenda of gender equality that takes all working women into account.

On the negative side, we saw the ATU Local 113 and Unifor fiasco. Not only did it demonstrate the corrosive impact on the labour movement of raiding, but the appeal to nationalism from Unifor President Jerry Dias was unprincipled.

The trusteeship of Local 113 by ATU International was understandable but far from ideal. But the lesson here is the need for vibrant and rank-and-file led union democracy that allows workers to freely choose their unions and be free of trusteeship even if done to prevent undemocratic actions like those of former Local 113 President Bob Kinnear.

The CAMI strike was the first legal strike at GM Canada since 2016. The desire to win job security is an audacious goal in this day and age and it ultimately came up short despite winning modest wage gains. Despite strong local support, Unifor Local 88’s strategy fell short. This is not an indictment of Local 88, as they faced extremely difficult odds and managed to maintain solidarity throughout the strike. Not unlike the Electro-Motive Diesel struggle, the failure of the CAMI strike to win job security will require a rethink of how labour approaches strikes in the manufacturing sector that can be easily shifted outside the country. Taking a cue from the strong local support for CAMI workers, it will be necessary to expand such campaigns on a country wide level in order to force manufacturing companies to provide job protection.

December 19 marked the one-year anniversary of the lockout at D-J Composites in Gander NL, and there is no end in sight. D-J Composites was found by the Newfoundland and Labrador Labour Relations Board to have engaged in bad faith negotiations back in May. They have only slightly modified their offers which includes pay cuts and elimination of seniority.

D-J Composites has received over $10 million over the years from the Newfoundland and Labrador government to create jobs. Once again companies are ignoring the sweetheart deals that different levels of governments have offered to provide jobs and have attacked workers instead.

We need to remember and continue to express our solidarity with the locked out workers at D-J Composites. But the longer term question for the labour movement is how to fight for policies that create jobs but are not simply corporate subsidies that still leave workers to be attacked at a company’s whim.

2017 has been a year where the labour movement needs to rethink its approach to governments and the state.

The Ontario college faculty strike brought the increasing precarity in higher education to the fore. However, like so many other labour disputes in the public sector since the economic crisis of the 1970s, the Ontario government used legislation to end the strike.

And on the federal level, while the Liberals repealed Stephen Harper’s most reactionary anti-union legislation, the labour movement needs to think beyond getting the old status quo restored.

It didn’t take long for the Liberals to try to pacify labour and then show their true colours. Bill C-27 is a serious attack on pensions that could see federal workers in the federal public sector and federally regulated industries, with defined benefits pensions have them changed to defined contribution plans.

There is a lot of opposition needed in the Prairies. There is austerity on the agenda in all of the provinces in the region. After 17 years of NDP governance in Manitoba, the labour movement there needs to be able to rekindle its tradition of fightback to challenge the PC’s agenda. Over in Saskatchewan, while Brad Wall’s premiership is in its final months, austerity is still the government’s main policy with the elimination of the STC inter-city bus line one of its most obvious results.

The Alberta NDP government despite enacting some much needed reforms in the province has signalled its intention to pursue austerity. This will be a test for the labour movement in Alberta which obviously welcomed the NDP’s victory in 2017. While polls have been looking poor for the NDP for some time now, they have decided to play Jason Kenney’s game of obsessing over the deficit which will almost guarantee defeat. The only way forward in Alberta is rethinking the reliance on cuts and pipelines. That won’t be easy but it is an essential part of building a labour movement in Canada for a post-carbon age.

And an oppositional approach is a must in British Columbia. The BCNDP’s five months in power has seen the government approving the Site C dam and dragging its feet on a $15 minimum wage. To stop another Site C from happening or getting a $15 minimum wage will require the labour movement putting pressure on the BCNDP, and not just in meeting rooms. John Horgan is already trying to lower expectation by stating in a year end interview, “set aside our activism and start being better administrators.”  Organizing a movement is the only way to push back against this drift.

With the approval of Site C making reconciliation with Indigenous Peoples more fraught, the labour movement should follow the lead of LIUNA’s agreement with the Assembly of First Nations and reach agreements on training, support for the Truth and Reconciliation Commission and the UN Declaration on the Rights of Indigenous Peoples, and not to accept construction projects that have not been accepted by the First Nations affected. Hopefully 2017 signals a turning point that will lead to more support from the labour movement for reconciliation.

With Trump’s election, NAFTA became a front page issue again. What we learned this year is that the Trump administration is making demands that would do little for Mexico or Canada let alone workers in those countries.

The response from the Liberal government has been surprisingly decent with demands that the U.S. abandon right-to-work laws, however it is extremely likely if that any final deal acceptable to all three governments is reached, Canada will drop the ending right-to-work demand.

To it’s credit, Unifor has taken a strong stand on the issue and is forging ties with the Mexican and U.S. labour movements stressing that a new NAFTA needs to help workers in all three countries. This kind of internationalism is refreshing. However the labour movement and other allies in seeking change to NAFTA need to put pressure on the Liberals to make sure things like an Indigenous chapter and strengthened labour provisions get added to NAFTA. Trudeau’s response to Trump’s foreign policy thus far suggest that Trudeau may very well fall into line on whatever Trump makes as a final offer.

To call 2017 a mixed bag isn’t quite accurate. There were setbacks and the limits of the actually existing labour movement were exposed. However, movements like the Fight for $15 and Fairness show a potential way ahead. In 2018, those looking to renew the labour movement need to build power from below and encourage other members to get involved and not shy away from making bold demands, forging international solidarity, and confronting governments, even if they are ostensibly friendly to labour.