The union reiterated that “the musicians are ready, willing and able to continue presenting concerts.” 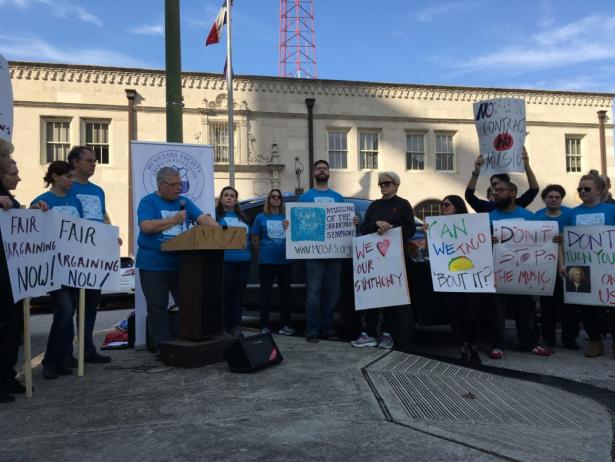 Sebastian Lang-Lessing, the San Antonio Symphony’s music director, said Friday that an upcoming series of Tricentennial concerts set to begin next week will happen. “They will take place,” he said, even as uncertainty clouds negotiations about a new labor contract for the orchestra’s musicians.

The current contract expires at midnight on Dec. 31. Talks have stalled between the musicians and Symphony management, which itself is unsettled amid a withdrawal by a new board that had been set to take over operations.

Lang-Lessing’s optimism, as the conductor characterized his assurance, comes with a challenge. “We need to pack the house in these concerts,” he told the Rivard Report in a FaceTime conversation from his Berlin home Friday afternoon. “Quite frankly, there starts the next responsibility.”

Lang-Lessing challenged the San Antonio community to “show some commitment” to its symphony orchestra, first by buying tickets to its concerts, then by realizing the seriousness of the current situation.

“What’s at stake at the moment is the sheer existence of the Symphony,” he said. “What’s happening right now – that the organization is in danger – is very disturbing.

Negotiations have hit a roadblock in part because current Symphony management has failed to schedule negotiation sessions beyond what musicians’ union leaders described as walkout by management representatives Dec. 18.

Who is actually in charge of the Symphony is also in question, due to the collapse of a transition agreement between past management by the Symphony Society of San Antonio, and a new nonprofit organization, Symphonic Music of San Antonio (SMSA).

Instead of taking over as planned, the SMSA pulled out of a transition agreement on Dec. 21. In withdrawing, Thomas A. Stephenson, SMSA president and CEO, cited a potential Symphony Society pension fund withdrawal liability as a “deal breaker.”

Craig Sorgi, a Symphony violinist and Musicians of the San Antonio Symphonylabor union negotiating chair, called the SMSA’s reason a “false excuse,” and has said that the withdrawal liability would not be incurred if current pension fund contributions were to continue.

As expiration of the musicians’ current labor contract looms, the Symphony Society has scheduled a board meeting for Tuesday, Jan. 2. The group’s board chair, Alice Viroslav, confirmed the meeting Friday in an email to the Rivard Report.

Asked Friday whether the musicians are prepared to work without a formal contract extension or negotiated agreement, Symphony violinist Craig Sorgi replied via text message, “For now all we can do is plan to return to work on the [Jan. 3] as scheduled. We are still working and honoring our contract until further notice.”

The union issued a press release Friday addressed to Viroslav, demanding that the Symphony Society “return to the business of contract negotiations post haste,” and asking for clarification on her further involvement with negotiations, and the role of Stephenson, with whom the union had been negotiating since early September.

That press statement was quickly followed by another, addressed to Symphony Society board members. Citing no response to requests for bargaining sessions, the letter points out that despite management uncertainty, the Symphony Society “continues to be the employer of record for the musicians and it is the duty of [Symphony Society] leadership to return to the table.”

In the second Friday press statement, the union reiterated that “the musicians are ready, willing and able to continue presenting concerts.”

Although he said he does not wish to interfere in negotiations, Lang-Lessing said, “of course I support the musicians, we’re in the same boat.” At the same time, he said, “Everybody who put money into the Symphony did so with the best intent to make it work. I strongly believe that.”

Lang-Lessing said his philosophy is that the Symphony is owned by the community as a whole, and that the responsibility to take ownership belongs collectively to the business leaders, elected officials, foundations, corporations, and individual citizens of San Antonio.

The conductor’s call to elected officials is in part being answered by several, including Congressional, County and City officials, including City Councilman John Courage (D9) and Mayor Ron Nirenberg, who have scheduled meetings with union leaders, Sorgi said.