books Astrophysics for People in a Hurry

The well-known scientist and commentator on science has presented us with a primer on his subject that is aimed at a wide and popular audience. 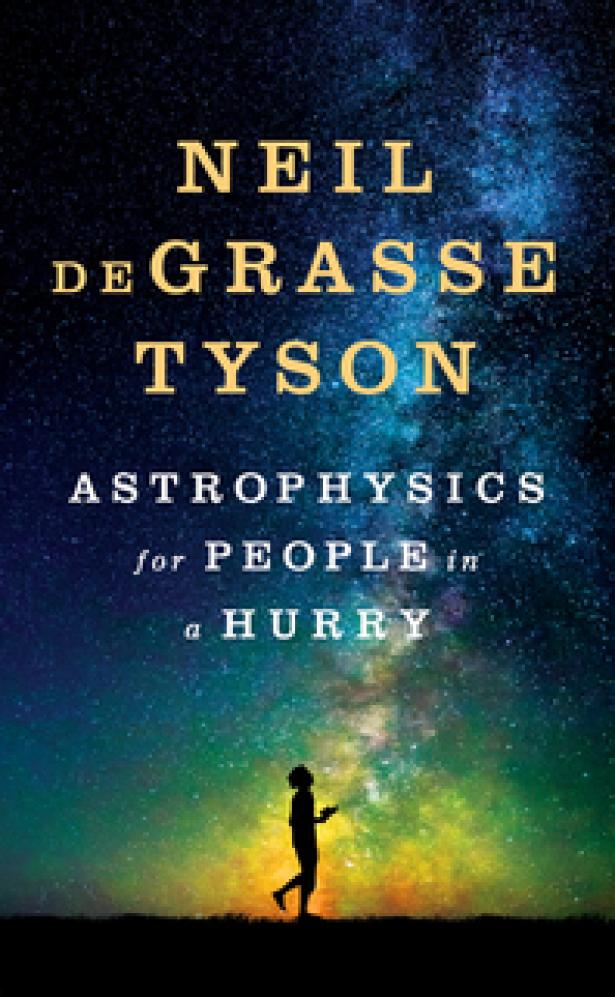 Astrophysics for People in a Hurry

The year is 1975. One of the nation’s most famous scientists invites an astronomy-obsessed high-school student from the Bronx to Cornell University, spends the day with him, then offers to put him up for the night if his bus home is delayed.

Tyson, now director of the Hayden Planetarium at the American Museum of Natural History, has become both a scientist and that kind of person. Through books and media appearances, as well as a robust Twitter presence, he’s well-known as a science communicator and popularizer, as well as a purveyor of both wisdom and common sense.

Everything about his latest book, Astrophysics for People in a Hurry, demonstrates why he’s been so successful. Consider the book’s appearance. The title tacitly acknowledges how learning about science fits into most people’s daily lives, if it fits at all. There’s no trumpeting the author’s fame and clout beyond the size of his name on the cover, no lengthy foreword serving as a barrier to readers anxious to get to the meat of it.

Even the book’s physicality makes a statement. Each page contains a mere 200 or so words, and the hardcover is slender and diminutive, fitting — albeit snugly — in the back pocket of my jeans.

Of course, none of this matters much if the text itself is a slog, but Astrophysics for People in a Hurry is fascinating and fun. Each chapter covers a single fundamental topic, like the origin of the universe, the formation and distribution of the elements, the electromagnetic spectrum, dark matter, dark energy, or the nature of interplanetary space.

Einstein is often credited with saying that if you can’t explain it to a 6-year-old, then you don’t understand it yourself. And while this book doesn’t read like one written for first-graders, it’s clear Tyson understands and is very good at communicating the material.

The chapter on exoplanets (that is, planets in orbit around a star that is not the sun) provides a great example of how Tyson reveals what we know and how we know it. The chapter starts off discussing what features of Earth are discernible as we move farther from it (from an airplane, the moon, the edge of the solar system), then imagines what an alien civilization on an exoplanet light years away could learn about Earth using technologies like our own. Turn this exercise around, and you understand how we detect and determine the characteristics of exoplanets and what the current limits are to this ability.

Tyson also has a knack for providing compelling tidbits that stick in your head and make concrete what might otherwise be hopelessly abstract. For example: The contents of a super-jumbo box of Cheerios would fit easily into a spherical carton with a four-and-a-half-inch radius. Two cubic feet of iridium weighs as much as a Buick. To imagine the density of a pulsar, think about stuffing a hundred-million elephants into a ChapStick casing.

It’s a credit to the author that I was halfway through before I realized that each chapter is closely adapted from one of the hundred or so “Universe” essays Tyson wrote for Natural History magazine between 1997 and 2007. (Stephen Jay Gould’s collections of Natural History essays, which sustained me as an undergraduate, were much less well-connected, more like short-story collections, while Astrophysics for People in a Hurry is like a novel.)

Some of this stuff is 20 years old, but it reads fresh, and where necessary — e.g., Pluto’s designation as a dwarf planet, the detection of gravitational waves — has been updated.

Tyson concludes the volume with a chapter on what he terms “the cosmic perspective,” a connectedness and humility in our daily lives that emerges from recognizing our place in the universe. Such a perspective isn’t new. Forms of it trace back at least to Darwin’s unforgettable closing of On the Origin of Species (“There is grandeur in this view of life…”). But it is worth revisiting, and Tyson’s articulation may especially resonate with contemporary readers. It did with me.

Savor this book in snippets of time as you have them. Then open the science section of a newspaper, visit a museum, or just gaze up at the night sky and see if your knowledge and appreciation haven’t grown a bit deeper.