The Bureau of Labor Statistics released its annual report on union membership on January 19th, 2018. There were several spots of bright news for unions. 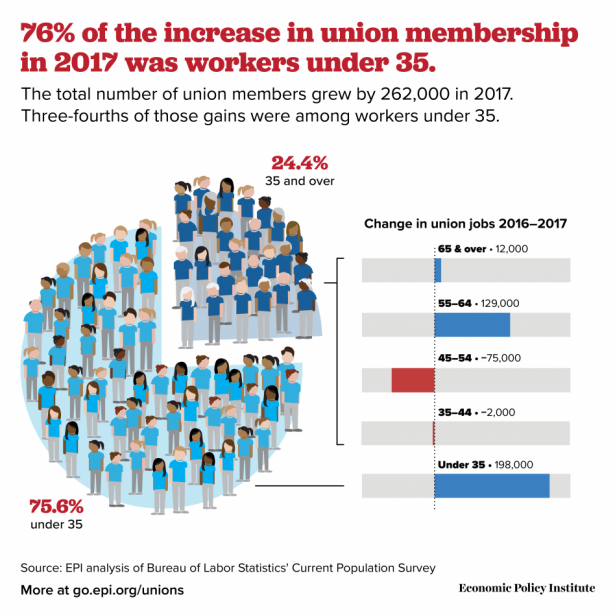 Union Membership Gains Even In The South
By Neal Tepel
LaborPress
January 23, 2018

Washington DC – Organized labor still provides the best way for workers to get ahead. While New York continues to have the highest percentage of workers in unions, at 23.8 percent union membership increased even in the South.

North Carolina remained second-lowest nationally with 3.4 percent of workers belonging to a union, although that number was up from 3 percent a year ago. Other Southern states like Arkansas, Virginia and Georgia also showed union gains.

Recently, drivers for a Charleston trucking firm voted to join the International Brotherhood of Teamsters following complaints over job classification and wages.

The recent labor report shows that, on average, union members continue to earn more than their non-union counterparts nationally. The median weekly earnings for union members was $1,041 in 2017, compared to $829 for those not represented by organized labor.

Last week, the Bureau of Labor Statistics released data on changes in union membership from 2016 to 2017. It was good news for workers, as the total number of union members grew by 262,000 in 2017. Three-fourths of these gains (198,000) were among workers aged 34 and under, who account for less than 40 percent of total employment.

In a recent EPI paper, we explain that one reason younger workers are joining unions is to address current workforce trends that are increasing work insecurity from the rise of part-time work and unpaid internships to increased numbers of contract workers.

After years of decline, Wisconsin’s union membership appears to have grown slightly in 2017, according to new labor estimates.

The federal Bureau of Labor Statistics reported Friday that the estimated number of workers belonging to a union grew by roughly 11,000 people. That translates to about 8.3 percent of the workforce.

Wisconsin was one of 26 states to see a growth in union membership, while the national rate remained unchanged at 10.7 percent.

“We’re hanging in there,” said Phil Neuenfeldt, president of the Wisconsin AFL-CIO.

Iowa saw the biggest one-year loss in union membership, from 8.9 to 7 percent, while Minnesota and Illinois saw gains of 1 and 0.5 points respectively.

On average, non-union workers earned about 80 cents on the dollar compared to their unionized counterparts.

Wisconsin, once a union stronghold, has experienced the country’s biggest drop in union membership since 2000.

At the turn of the century, Wisconsin had about 456,000 union members, and nearly one in five workers was represented by a union, according to BLS data. Membership fell to just 219,000 before rebounding in 2017.

Public unions in Wisconsin suffered a hit in 2011 with the passage of Act 10, which eliminated most collective bargaining rights, but the biggest single drop in union membership came in 2015 with the passage of “right to work” legislation, which allows workers in union shops to opt out of paying dues.

About 9 percent of Wisconsin workers were represented by a union last year, the same as in 2016.

Neuenfeld said membership growth is strong among millenials and that unions are more relevant than ever with growing income disparities.

“The only way that people are going to be able to advocate for themselves with the government taking away regulations and rules is through collective bargaining,” he said.

Bill Brockmiller, outgoing president of the Western Wisconsin AFL-CIO labor council, said unions have to figure out how to market themselves in right-to-work states where the number one concerns of workers are more likely to be job security and equal treatment than wages, although he notes wages are higher in states without right-to-work laws.

But Brockmiller thinks union membership numbers have bottomed out.