The absence of institutional memory when it comes to dealing with communal conflict is glaring. After independence and partition, while report after report of officially appointed judicial commissions has analyzed and indicted certain discernible trends behind escalating violence and pogroms, the formal judiciary and courts appear not to have internalized these findings and recommendations. The very fact that a significant part of the 1998-Justice B.N. 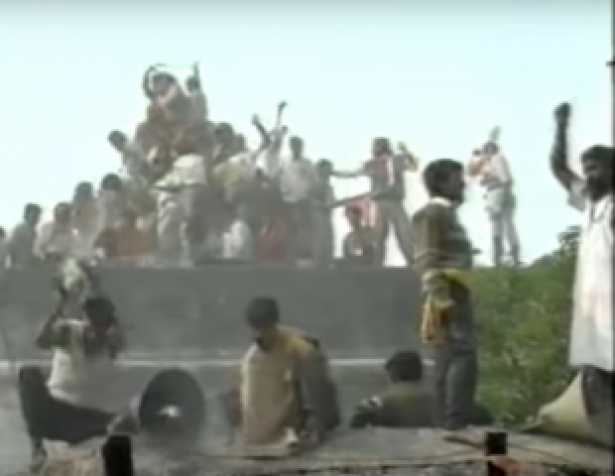 The fault lines were sharp and deep that December 1992 when for nine days the urbs prima of India, hailed for its cosmopolitanism, saw this veneer shredded—painfully. All of December, including Christmas and New Year celebrations, public temper in Bombay was fragile, as the ill-intended maha-aarti program launched by the far right (Shiv Sena, Bharatiya Janata Party) combined released a fresh bout of hate that again spilled into violence against the Muslim 'other.’ This is what led to the violence of January 1993, where for another nine days, at least, there was violence instigated by the Saamna, the daily newspaper and mouthpiece of the Shiv Sena (SS), ensuring that homes and properties were targeted with chilling precision.

Officially, 900 people were killed in mob rioting and firing by the police, 2,036 were injured and thousands internally displaced. Three rapes were reported and registered. According to the People’s Verdict, a staggering 141 incidents took place in 1992 and 1,411 in January 1993. The People’s Verdict was a 160-page report of a citizen’s inquiry headed by two retired judges of the Bombay High Court: Justices S.M. Daud and Hosbet Suresh. It visited affected communities and recorded voluminous evidence. The report was released in July 1993.

It’s been 25 years, a quarter of a century ago, since Bombay burned. The demolition of the Babri Masjid mosque in Faizabad Ayodhya (the political program for the demolition of the mosque began in 1986 and ended with the demolition on Dec. 6, 1992) was the immediate and formal provocation. But as the meticulous documentation by citizens for, first, the People’s Verdict, and second, the petition seeking an First Information Report (FIR) against Bal Thackeray in the Bombay High Court and thereafter corroborated by the Justice B.N. Srikrishna Commission revealed, the public temper had been kept on the boil by hate-filled provocative writings on the pages of the Saamna since July of 1992. The Congress government led by Sudhakarrao Naik chose to let these crimes pass, the Bombay police chose not to act, and the rest are dark pages in India’s history.

The official commission report took five years to complete and was released in February 1998. In the interim period (1995-1999), the same forces indicted by the Commission for fomenting the violence rode to power and ruled the state of Maharashtra from 1995 to 1999. They attempted to disband the commission that was restored to its functioning in June 1996. Again, following the victory of Hindu-supremacist BJP in the May 2014 general elections in India, Maharashtra has seen the return of a far-right government, headed by the BJP. Twenty-five years ago, the BJP had been a junior party of the saffron alliance in the state.

It was the vicious campaign unleashed by LK Advani-led Rath Yatra to demolish the Babri Mosque that had set the stage for what was to follow. Periodic and repeated retaliatory incitements by minority communal outfits had ensured that within the larger picture of a targeted anti-minority pogrom, vicious killings of Hindus by Muslim criminals (stabbings in the later part of December) ensured that the communal pot was kept on the boil. History had been manipulated in the public domain to create a mass hate perception against India’s largest religious minority, the Muslims. The term Babur kiaulad (sons of the Mughal king Babur, who had built the mosque in Ayodhya) was popularized as a villificatory term.

Who cast the first stone? It is a theoretical formulation related to targeted communal violence that I developed while closely covering the Bombay violence of 1992-1993. From December 6, the day the Babri Masjid was brought down by a calculated act as 3,000 Central paramilitary forces mutely looked on, crude attempts to justify the crime were rooted in the falsified theory of the assaults on the minority being ‘just a retaliation.’ This was simply not borne out by facts. Even as the mosque was being brought down, the SS-RSS-VHP combine were holding ‘victory processions’ and ‘temple-ringing ceremonies’ in Dharavi, Pydhonie and other locations, rubbing salt on raw wounds.

When angry Muslims came out to express their anguish at this betrayal by the Indian state, the Bombay police displayed a distinctly communal color. Of the 163-odd deaths to police bullets, an overwhelming two-thirds were Muslim. Women and girls were shot and killed in their homes.

The retaliation theory did not stop here. Repeatedly, as the violence continued, the BJP and SS baselessly tried to blame the violence on the Pakistan Inter-Services Intelligence (ISI) and Bangladeshi immigrants. The official report of the Srikrishna Commission debunks this while clearly linking the March 12 serial blasts to the anger and alienation caused by the December 1992-January 1993 targeted violence. Months and years later, senior functionaries of the saffron continue to try to warp public memory by flipping the narrative. It was the blasts, they say, that came first, causing the anger to spill into riots.

So much more than a 400-year-old mosque was brought down that December 6. The secular fundamentals of a fledgling Indian nation were shaken to the core as law enforcement agencies stood mutely watching. Their actions displayed an unprofessional, majoritarian bias. Down south, back home in Bombay, brazenly partisan behavior was evident in large sections of the force, epitomized by commissioner of police S.K. Bapat, who was severely chastised by Justice Srikrishna in his report. Then additional commissioner of police V.N. Deshmukh’s testimony opened our eyes to how the rank and file of the Bombay (even Maharashtra) police force has been infiltrated by the rabid, anti-constitutional ideology of the far Hindu right.

Eight years before, when Bhiwandi had burned (in May 1984, this textile city north of Bombay had witnessed brute violence), and parts of Bombay with it, the subtle east-west divide (of class and location) had insulated large parts of Bombay’s consciousness from the brutality of several Muslims being burned alive at Ansari Bagh or the stabbings at Govandi. All this was breached that winter in Bombay as every area felt the fear and hatred, as posh housing colonies erased Muslim names from their residential lists and Muslim men shaved their beards. Electoral lists had been accessed by marauding mobs who found it easy then to make out their targets. Cocktail parties spewed a newly legitimized hatred and as Mahim’s timber mart was set ablaze on January 9, an urbane Maharashtrian was heard making this chilling remark: “I felt a (macabre sense of) satisfaction. Next year my Ganapathy procession will not now have any obstruction as it makes its way to the Mahim bay!”

This was the changing Indian discourse, a glimpse of what was to follow, first in 2002 (Gujarat) and then in 2014 (NDA 11 victory)—the legitimization of a Hindu nation on the embers of hate and killing.

The betrayal from the ruling Congress with self-acclaimed secular credentials is something that Indian politics has neither come to terms with, nor lived down. Eight years before, the party had, figuratively at least, overseen the anti-Sikh pogrom in New Delhi that followed Prime Minister Indira Gandhi’s assassination. A year before that was Nellie, February 1983, when an estimated 2,000 Muslims were brutally killed in Assam. The creeping capture of sections of the Indian state by an ideology that believed in the elimination of certain sections was not put down nor was the rule of law enforced. In Bombay, too, 25 years ago, the Congress-ruled administration allowed the marauders to have their way. Even the token transfer of the police commissioner (an action often initiated to placate outraged public sentiments) came only in early February 1993 when Samra replaced Bapat. Satish Sahney, an officer who meticulously tried to repair the damage to the social fabric, was brought in later.

There is worse. In 1999, the Congress NCP combine saw itself coming to power on the electoral promise of implementing the recommendations of the Justice B.N. Srikrishna Commission report. This included, among other things, prosecution of 31 policemen inducted from criminal acts by the Commission. Not only did no prosecution take place, but an RTI investigation by this writer in 2007-2008 revealed that all those officers had in fact been promoted. At best they had suffered generation cuts for six months. On affidavit, the state government declared that of the 18 cases filed against policemen in the Suleman Usman Bakery case, 9 of them including the then joint commissioner of police R.D. Tyagi were discharged in 2003 by the trial court. While the state dragged its feet in filing an appeal, a survivor did, but the Bombay High Court order of Oct. 16, 2009, while acknowledging that the firing by the police was “cruel and atrocious,” opined that there was no sufficient evidence against Tyagi. Finally in 2011, even the Supreme Court exonerated this intemperate act of the police. Hence, the only one case of dismissal of a constable (for the crime of throwing a young Muslim into the waiting hands of a bloodthirsty mob) was the firm, administrative action by Satish Sahney, as commissioner of Mumbai.

Teesta Setalvad is an Indian civil rights activist and journalist. She is the secretary of Citizens for Justice and Peace (CJP), an organisation formed for fighting for justice for the victims of communal violence in the state of Gujarat in 2002. CJP is a co-petitioner seeking a criminal trial of Narendra Modi, the then Chief Minister of Gujarat and the current Prime minister of India and sixty-two other politicians and government officials for alleged complicity in the Gujarat riots of 2002 and whose names did not figure in any of the FIRs /charge sheets that formed the subject matter of the various Session Trials regarding the riots at that point of time. Four of the accused since then were charge-sheeted, of whom Maya Kodnani and Babu Bajrangi have already been convicted.