Officers expressed sympathy with white supremacists and sought their help to target counter-protesters after a violent 2016 rally, according to court documents 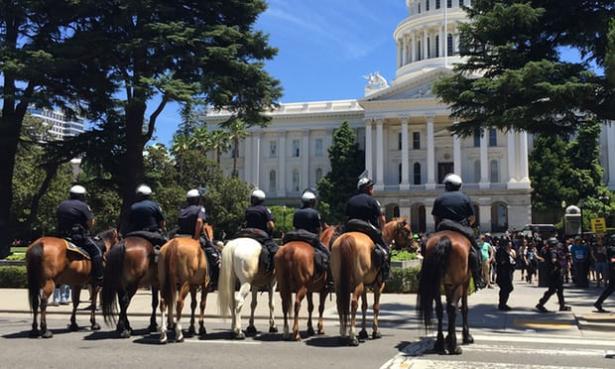 Sacramento mounted police officers at the June 2016 rally, which was organized by a neo-Nazi group. , Jerry H. Yamashita/AP

California police investigating a violent white nationalist event worked with white supremacists in an effort to identify counter-protesters and sought the prosecution of activists with “anti-racist” beliefs, court documents show.

The records, which also showed officers expressing sympathy with white supremacists and trying to protect a neo-Nazi organizer’s identity, were included in a court briefing from three anti-fascist activists who were charged with felonies after protesting at a Sacramento rally. The defendants were urging a judge to dismiss their case and accused California police and prosecutors of a “cover-up and collusion with the fascists”.

Defense lawyers said the case at the state capital offers the latest example of US law enforcement appearing to align with neo-Nazi and white supremacist groups while targeting anti-fascist activists and Donald Trump protesters after violent clashes.

“It is shocking and really angering to see the level of collusion and the amount to which the police covered up for the Nazis,” said Yvette Felarca, a Berkeley teacher and anti-fascist organizer charged with assault and rioting after participating in the June 2016 Sacramento rally, where she said she was stabbed and bludgeoned in the head. “The people who were victimized by the Nazis were then victimized by the police and the district attorneys.”

Steve Grippi, chief deputy district attorney prosecuting the case in Sacramento, vehemently denied the claims of bias in an email to the Guardian, alleging that anti-fascist stabbing victims have been uncooperative and noting that his office has filed charges against one member of the Traditionalist Workers Party (TWP), the neo-Nazi group that organized the rally.

Some California highway patrol (CHP) investigation records, however, raise questions about the police’s investigative tactics and communication with the TWP.

Felarca’s attorneys obtained numerous examples of CHP officers working directly with the TWP, often treating the white nationalist group as victims and the anti-fascists as suspects. 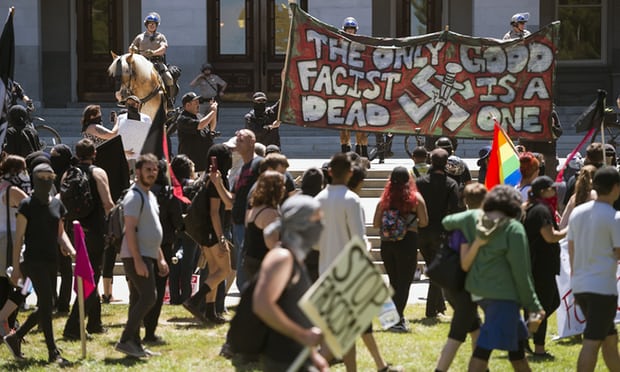 The TWP is “intimately allied with neo-Nazi and other hardline racist organizations” and “advocates for racially pure nations”, according to the Southern Poverty Law Center. Its leaders have praised Trump, and the group claimed to bring more than 100 people to the Charlottesville white supremacist rally, where a counter-protester was killed.

In one phone call with Doug McCormack, identified by police as the TWP affiliate who acquired the permit for the Sacramento rally, CHP investigator Donovan Ayres warned him that police might have to release his name in response to a public records requests. The officer said he would try to protect McCormack.

“I’m gonna suggest that we hold that or redact your name or something until this gets resolved,” Ayres told McCormack, adding that he didn’t know who had requested records of the permit and noting, “If I did, I would tell you.”

Ayres’s reports noted that McCormack was armed at the rally with a knife.

The officer’s write-up about an African American anti-fascist activist included a photo of him at the hospital after the rally and noted that he had been stabbed in the abdomen, chest and hand.

Ayres, however, treated the protester like a suspect in the investigation. The police investigator recommended the man be charged with 11 offenses, including disturbing the peace, conspiracy, assault, unlawful assembly and wearing a mask to evade police.

As evidence, Ayres provided Facebook photos of the man holding up his fist. The officer wrote that the man’s “Black Power salute” and his “support for anti-racist activism” demonstrated his “intent and motivation to violate the civil rights” of the neo-Nazi group. He was ultimately not charged.

“This is a textbook case of a political witch-hunt and selective prosecution,” Shanta Driver, one of Felarca’s attorneys, said in an interview.

Officers also worked with TWP member Derik Punneo to try to identify anti-fascist activists, recordings revealed. Officers interviewed Punneo in jail after he was arrested for an unrelated domestic violence charge. Audio recordings captured investigators saying they brought photos to show him, hoping he could help them identify anti-fascist activists.

The officers said, “We’re pretty much going after them,” and assured him: “We’re looking at you as a victim.”

Ayres’s report noted that Punneo was armed with a knife at the neo-Nazi rally and that one stabbing victim told officers he believed Punneo was responsible. Using video footage, Ayres also noted that Punneo was “in the vicinity” of another victim at the time he was injured, but the officer said the evidence ultimately wasn’t clear.

Punneo and McCormack, who could not be reached for comment, were not charged. Ayres’s report included images and names of three other TWP-affiliated men who he said were armed with knives, but who also have faced no charges.

In a response filed on Thursday, prosecutors said “every assertion” in the motion to dismiss is “inaccurate or fabricated” and accused Felarca’s lawyers of using the filing to “make a political statement”. The response also repeatedly blamed the stabbing victims for ignoring the district attorney’s inquiries: “Despite the fact that we have not gained the cooperation of these victims, the investigation to hold their attackers responsible continues forward.”

Prosecutors also said the charges were based on video evidence and argued that “no one is beneath the protection of the law, no matter how repugnant his or her rhetoric or misguided his or her ideals”.

Allegations of police bias and collusion with neo-Nazis have emerged in similar cases across the US. Last year, US prosecutors targeting anti-Trump protesters in Washington DC relied on video evidence from a far-right group with a record of deceptive tactics.

At an Oregon “alt-right” event, police allowed a member of a rightwing militia-style group to help officers arrest an anti-fascist activist.

Police in Charlottesville were widely accused of standing by as Nazis attacked protesters, and a black man who was badly beaten by white supremacists was later charged with a felony.

Sam Menefee-Libey, an activist who advocated for protesters charged for Inauguration Day rallies last year, said the government has repeatedly gone to great lengths to target anti-fascists: “We have patterns of acknowledged and unacknowledged overlaps between the interest of ultra-right nationalist organizations and the police and prosecutors’ offices.”