A Pledge to Transform the Resistance, and America

A popular narrative today is that we live in a country which is deeply divided. And the Democratic Party, we are told, is nearly as split as the nation itself. But chatter in the press and social media may overlook some fundamental points of agreement about changes we need to make in our economy. That’s the premise behind a new pledge, the “Agenda for Good Jobs, Sustainable Prosperity, and Economic Justice,” that has been signed by more than 70 prominent progressives. 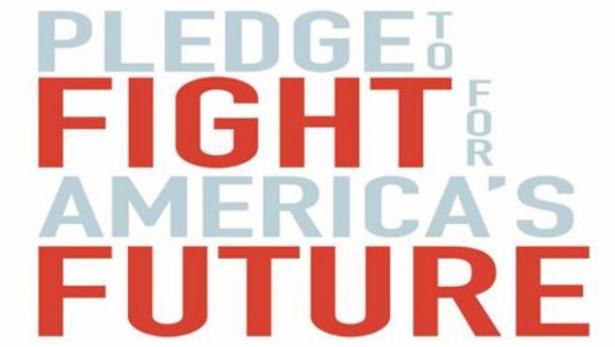 It declares “both major political parties have allowed the wealthy and the giant corporations to exercise far too much influence in American life” before laying out an 11-point agenda to rebuild a human-centered economy, and remove the corrupting influence of big money from the political process.

“Resistance” to Donald Trump is a vital effort.  But resistance is reactive; it only defines what we’re against. If today’s resistance is to become a lasting movement, we must decide what we’re for. Otherwise, the Resistance will fail to motivate the 38 percent of Americans who didn’t vote in the last election.

In what may be a chilling portent of things to come in November, the latest Politico/Morning Consult poll shows the “generic Republican” congressional candidate edging ahead of the generic Democrat for the first time since April of last year.

All signs indicate that it will be hard for Democrats to win in November without a clear and positive agenda, and all but impossible for them to claim a real mandate if and when they do.

These are the kind of reforms rank-and-file Democrats want, according to polling data. In a recent Harvard-Harris poll, Democratic base voters were asked: “Do you support or oppose movements within the Democratic Party to take it even further to the left and oppose the current Democratic leaders?”

52 percent of those polled said they support them.  In a telling sign for the party’s future, 69 percent of voters aged 18 to 34 agreed. As we wrote in October 2017, this desire is not limited to the “Bernie Bro” stereotype promoted by political insiders. This position has greater support among female voters (55 percent), Hispanic voters (65 percent), and African-American voters (55 percent) than it does among whites (46 percent) and men (49 percent).

But support for this agenda is not limited to Democratic voters. 75 percent of Americans support more federal spending on infrastructure, according to Gallup, while 73 percent want the US to place more emphasis on alternative energy.  in another poll, 75 percent of Trumpvoters supported “taking action to accelerate the development and use of clean energy” by funding community upgrades and community renewable projects.

Other polls show strong support for labor unions, increasing the minimum wage, reducing inequality, getting big money out of politics, and other key elements of this agenda – and that’s without advocacy and support from either political party.

The report’s agenda is also buttressed by a recent economic growth from the Levy Instituteshowing that the cancellation of all student debt in this country would lead to significant growth and the creation of more than 1 million jobs.

If the resistance remains focused on Trump to the exclusion of other issues, Trump will continue to dominate the media conversation as he has done for the past year.  The debate also needs to address people’s lives and needs.  Otherwise, voters may believe Democrats are uninterested in stagnating wages, soaring out-of-pocket health care costs, or the grim reality that the American majority – 80 percent, according to one survey – lives paycheck to paycheck.

Voters want leaders who will work for change. While this agenda was not designed as a litmus test, it certainly represents a platform that activists can use to assess political candidates. Conversely, candidates can use it to drum up support, knowing that it is backed by strong policy analysis and good politics.

(I genuinely regret not listing them all, since I’ve had to leave out so many terrific people. You can see them all here.)

There are many ways to look at this agenda: as a political statement, as an organizing tool, and as a unifying statement. I also think of it as “11 ways we can make our own lives better” — as individuals, as members of our communities, and as citizens.  You can read it in full, and sign your own name to it, here.

Signers endorse as individuals. Organizations listed for identification only.

Larry Cohen - Board Chair, Our Revolution

James K. Galbraith - LBJ School of Public Affairs at U of Texas at Austin, Professor

Jim Hightower - The Hightower Lowdown, Editor & Our Revolution Board

Naomi Klein - Author, No Is Not Enough: Resisting Trump's Shock Politics & Winning the World We Need