The Happiest Place On Earth? Not For Disney Employees 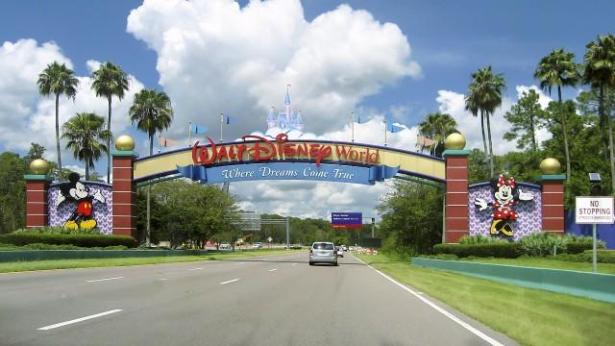 The entrance to Disney World in Orlando, Florida, spatuletai/Shutterstock

For a scenic view of America’s corporate-captured economy, just take a vacation to Disney World, where it appears that someone forgot to tell employees that they work at the Happiest Place On Earth.

More than 35,000 Disney employees in Orlando had little to smile about on Monday as ongoing union contract negotiations with the entertainment giant took a turn for the worse. The Services Trade Council, a coalition of unions representing the Disney World Resorts workers, has accused Walt Disney Co. of throwing cold water on employee demands for higher wages, by turning a promised $1,000 one-time bonus into a bargaining chip.

On Tuesday, nearly 2,500 miles away at the other “Happiest Place on Earth,” a union representing more than 2,700 Disneyland Resort employees in California filed their own federal charge to the National Labor Relations Board.

The entertainment giant’s January announcement of a one-time bonus for more than 125,000 of its employees in the aftermath of the Trump tax cuts not only made for good press—it turns out it also makes for great leverage. In Florida, talks between Disney and the trades council have been going on since the summer, with little to show for it, according to reporting by the Orlando Sentinel. In December, union members shot down a proposal that would have provided a raise of 50 cents an hour or a 3 percent increase, whichever was higher. When the two sides met Monday, Disney offered the same proposal that union members had already rejected—only this time, they soured the pot by also threatening to take away the one-time bonus. Union members in Florida and California have until the end of August to accept Disney’s offer or the “bonus offer will expire.”

According to Disney spokeswoman Andrea Finger, wages and bonuses are part of Disney’s negotiation process, and the company will “continue to meet with the union to move toward a ratified agreement.”

The public fallout between the entertainment giant and its employees comes at a financial boom time for Disney, which reported a quarterly net income of $4.42 billion this month, up 78 percent from a year earlier, in large part thanks to the new tax cuts. In 2017, the company posted $9.3 billion in after-tax profit.

Disney has announced that it expects a windfall of $1.6 billion from the Republican tax cut—which means that its employee bonuses add up to just 8 percent of the funds it will reap. The average American corporation may be even more Scrooge-like than Disney. Corporations have pledged $171 billion worth of stock buybacks and dividends to their shareholders so far this year, according to research firm Birinyi Associates. By contrast, a recent analysis by the Academic-Industry Research Network and Drucker Institute Director Rick Wartzman estimates that only $5.6 billion has been devoted by S&P 500 companies to wage hikes, bonuses, and worker benefits (additional contributions to 401(k) plans and philanthropic donations were not included) because of the new tax law.

To the extent that corporations feel compelled to give their workers anything at all from their tax cut booty, one-time bonuses are certainly less costly than pay hikes. Under the new tax law, moreover, companies may deduct bonuses from their taxable income as a cost of doing business; performance-related pay increases, however, are not deductible.

The other gift that the tax cuts have given corporations is the opportunity to posture. Management can present bonuses and the rare wage hike as an act of corporate benevolence, rather than deserved compensation after decades of stagnant wage growth while profits have soared. Walmart and Comcast paired their bonus announcements with significant layoffs. AT&T announced 200,000 bonuses of $1,000 and then laid off thousands.

Short of banning stock buybacks, there’s little that can be done to stop such corporate behavior. Not even an economy that appears to be at full employment has put sufficient pressure on companies to raise wages, protect current jobs, or increase hiring. Unions, often serving as the last bulwark against corporate overstepping, have been in decline for decades and now face an existential threat as the Supreme Court prepares to hear arguments Monday in Janus v. AFSCME—a case that could see the entire public sector become right to work.

As Walt Disney, no stranger to anti-union tactics himself, said at the opening ceremony for the California theme park in 1955: “Disneyland is dedicated to the ideals, the dreams, and the hard facts that have created America.”

The hard facts of corporations favoring stockholders over American workers time and again, thrown into overdrive by the Republican tax bill, could not be more clear or sobering.

Tax Cuts for the rich. Deregulation for the powerful. Wage suppression for everyone else. These are the tenets of trickle-down economics, the conservatives’ age-old strategy for advantaging the interests of the rich and powerful over those of the middle class and poor. The articles in Trickle-Downers are devoted, first, to exposing and refuting these lies, but equally, to reminding Americans that these claims aren’t made because they are true. Rather, they are made because they are the most effective way elites have found to bully, confuse and intimidate middle- and working-class voters. Trickle-down claims are not real economics. They are negotiating strategies. Here at the Prospect, we hope to help you win that negotiation.