This campaign was years in the making, but Donald Trump's election and the withdrawal from the Paris Climate Accord spurred the local activism that led to this important victory. 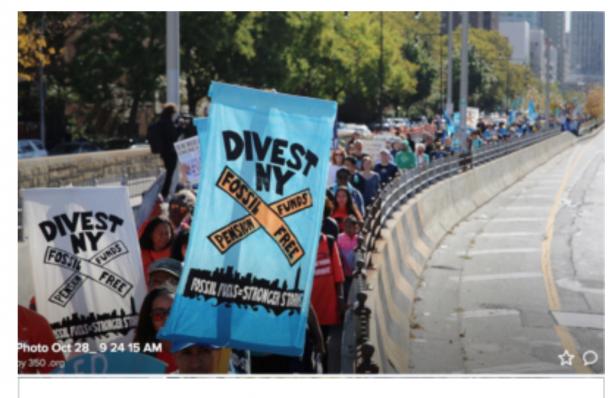 After five years of tireless organizing, the movement to divest NYC public worker pension funds from fossil fuels scored a win.  On January 10, Mayor Bill de Blasio announced that New York City will divest the $5 billion of its pension funds presently invested in fossil fuel stocks. It will also sue the top five fossil fuel corporations—ExxonMobil, Shell, BP, Chevron, ConocoPhillips—charging that because they hid the evidence that burning fossil fuels causes climate change, they are responsible for the billions of dollars the city has spent on climate remediation.

The divestment campaign provides an excellent example of how dedicated organizing, clear demands and strategies, creative tactics, strong coalitions and good luck can come together for a win.

The US Divestment movement was popularized in 2012 through the national “Do The Math” tour, led by 350.org’s Bill McKibben and author Naomi Klein.  Borrowing a page from the successful anti-apartheid divestment campaign directed at South Africa in the 1980’s, 350’s focus was fossil fuel divestment in colleges, universities, foundations and non-profits. While pension funds were on the list, little attention was initially paid to them.

In 2012, Divest NY started lobbying, building alliances, and creating the groundwork for a broader movement. Public pension member unions began to support:  United Federation of Teachers (UFT) passed a resolution calling for a feasibility study on divestment from fossil fuels and for total divestment from coal; PSC-CUNY passed resolutions supporting immediate fossil fuel divestment on city and state levels, as did the NY State Nurses Association; and AFSCME DC 37 rallied members and leaders to consider divestment.

After Hurricane Sandy in 2012, New York’s mainstream media was largely reluctant to expose climate change’s threat to coastal NYC, due in part, as author Ashley Dawson explains, to the powerful interests of NYC’s real estate industry.

In 2015, defying this silence, New York’s Public Advocate Letitia James came out in support of full fossil fuel divestment—coal, oil, and gas-- and publicly spoke about climate change and became the primary climate advocate in the political class. In 2016, the intense anti-pipeline confrontation lead by indigenous people at Standing Rock activated and inspired people around indigenous rights and the dangers of fossil fuels. After the Standing Rock encampment was raided, many of the younger leaders pushed supporters to take their money out of banks that supported the Dakota Access Pipeline (DAPL). Divestment became a form of direct action.

Trump’s election helped to clarify the politics of the fossil fuel industry. As exemplified by the Koch brothers, the fossil fuel industry was exposed for buying political influence through campaign contributions and distributing misleading information denying climate change. Trump accommodated by stacking his administration with industry leaders and lobbyists, including former ExxonMobil CEO Rex Tillerson and industry apologist Scott Pruitt, while removing decades-worth of environmental protections and regulations, and scrubbing the Environmental Protection Agency’s website of any reference to climate change.

By early 2017, the tide was turning (and rising) about climate change.  Trump’s election spurred new resistance, giving the climate movement a remarkable burst of human energy.   NYC-based “Climate Works 4 All” and NY State-based “NY Renews”, two broad-based policy coalitions that came out of the massive 2014 NYC Peoples Climate March, both with deep union, environmental justice, and community participation welcomed dozens of grassroots groups and union locals into the world of climate politics.

When Trump withdrew the US from the Paris Climate Accords in June 2017, the climate movement determined that it would be most productive to work at the city and state levels to counteract federal policies.   Next came the climate catastrophes of late summer and autumn 2017—Hurricanes Harvey, Irma, and Maria, wildfires raging in northern and southern California, earthquakes in Mexico—put everyone on alert.  Maria’s devastation of Puerto Rico struck a particularly hard blow for New Yorkers. That our “6th borough” was wiped out and tens of thousands of our relatives were streaming to the mainland for shelter, became an acute source of pain.

It was in this fertile soil that Divest NY sank its roots deeper and grew a broader, more effective movement through forums and rallies, extensive lobbying with City elected officials and their pension fund advisors, demonstrations at pension board meetings, birddogging NYC Comptroller Scott Stringer, who was initially the main city opponent. Divestment’s popular support made it one of the central demands in the mass march commemorating the 5th anniversary of Hurricane Sandy in October 2017. All this activity gave the divestment movement a voice, dynamism, and trajectory that couldn’t be ignored when the political climate shifted.

In November, 2017, Divest NY worked closely with NYC Public Advocate Letitia (Tish) James to organize a large public hearing that was attended by over 300 people. This hearing fortified the climate movement as a broad-based, multi-faceted effort that advanced a “just transition” to a renewable energy economy that included jobs for those most negatively affected by climate change—poor and working-class people and people of color.  The climate crisis was cast as an opportunity to address the inequalities in our society, with divestment as the most repeated mantra of the day: drop support for the deadly fossil fuel economy and use those funds to create a sustainable and just world.

Mayor de Blasio handily won re-election for his last term in November 2017. Despite his minimal campaign on climate policies, the big win gave him lots of political space.

For several years, NYC Comptroller Scott Stringer and NY State Comptroller di Napoli shared a “shareholder activism” perspective that contended that retaining fossil fuel stocks allows the big pension funds to influence the industry through shareholder power.  Despite what the Washington Post called a “shareholders rebellion”, this approach has failed to prod the giant fossil fuel corporations into a different business model.  While Stringer ultimately abandoned this “shareholder activism” position once Cuomo and de Blasio came out for divestment, di Napoli continues to cling to this approach.

While pension funds are the largest and potentially most powerful investors in the stock market, larger than banks and investment houses, rules governing pension funds make shifts in investments complicated.  The financial health of a pension fund is the primary concern; “moral” decisions are peripheral. Tom Sanzillo, first deputy comptroller of New York State, was one of the earliest public investment experts to suggest that fossil fuel stocks are in jeopardy of a quick nosedive that could harm pension fund members significantly. He argues that fossil fuel stocks are over-valued due to oversupply and that capital spending in the sector has dropped indicating that oil companies themselves see a limited future. Indeed, fossil fuel stock values have declined over the past five years compared with the general stock indices, making them a bad investment.

If the remaining oil and gas continues to be burned at the current rate, the planet will warm beyond the point in which human life will be possible so we must leave them in the ground. This turns fossil fuel assets into “stranded assets,” which bodes poorly for the health of their stocks and puts fiduciary responsibility to divest from fossil fuels into play. Once the financial argument could be made, the moral and political claim had a clearer path forward.

One of Divest NY’s limitations was a lack of active participation of public sector unions invested in the pension funds.  NYC has five separate pension funds - for teachers (United Federation of Teachers and Professional Staff Congress - CUNY), public workers (mostly AFSCME District Council 37, Transport Workers Union, Teamsters 271), Firefighters, Police, and Educational Management.  Each pension board has a mix of trustees appointed by the unions, the mayor, comptroller, public advocate, and/or borough presidents.  Divest NY continued to push those trustees over the course of the campaign. There were union resolutions and rank and file support from three of the city unions—PSC-CUNY, UFT and AFSCME DC 37—but without much traction with the trustees.

The political dam broke on Dec. 19, 2017, when New York State Governor Cuomo announced his support for fossil fuel divestment of the state Common Pension Fund, which controls more capital than the five funds of NYC put together. Within hours, NYC Comptroller Stringer announced his support.  Three weeks later, NYC Mayor de Blasio joined in. Divest NY was brought into the planning and announcement of the news release and was given full credit for its organizing work.  de Blasio’s progressive credentials were further burnished.

Where Does Divestment Go From Here?

The divestment movement is delighted with the dramatic results of our efforts.  While there are declared allies inside government, our movement needs to be vigilant that these elected officials follow through on their commitment to divest in a timely manner. Already there is push back from the NYC Teachers, Police, Firefighters fund trustees, either rejecting outright the calls for divestment from the mayor or asking for further studies, delaying the process.

The turn-around time to fully divest NYC pension funds from fossil fuel stocks is expected to be four to five years during which time as a movement, we need to start conversations with unions and environmental justice frontline community leaders about how to re-invest those billions of dollars of pension funds.

The organizing operation must expand to the state level to ensure that the larger-yet NY State public pension fund divests as well, potentially another $6 billion divested from fossil fuel holdings.  And beyond, NY State, the divestment movement has additional targets, particularly in big cities and states with progressive populations and leadership.  Labor Network for Sustainability (LNS), a national labor and climate advocacy organization, is working with 350.org and the Climate Justice Alliance to target public pension funds in other cities and states to advance divestment and re-investment efforts toward a “just transition”.  LNS just launched a “Guide to Divestment” that helps union members decide and act on divestment campaigns across the nation.

Both the value of divestment as a climate demand and the ways in which it might link to frontline communities will be addressed by this author in other articles.  Right now divestment campaigns advance awareness of the role of fossil fuels in creating climate change; they create a platform to view the fossil fuel industry as a pariah.  Loosening up those billions of dollars presently invested in fossil fuel stocks-- $5 billion in NYC public pension funds and $6 billion in NY State funds alone—creates an opening for conversations with the climate justice and labor movements as to where we do want to invest to create a just transition to renewable energy.  Support for publicly owned renewable energy, pubic transit and public housing could be invested in through publicly-traded bonds with guaranteed returns.  Public banks could be backed as they choose more locally defined, perhaps smaller-scale, sustainable community projects.

The divestment movement must learn a great deal about pension fund investments and how to safely and legally make these shifts.  Community engagement, especially of frontline communities most affected by climate change, will be needed as well.  Unions, climate organizations and the environmental justice community working together could be a game changer in all of these movements. The potential of using those billions of dollars presently being used to destroy our planet to provide the capital to contribute to a just transition is powerful indeed.

Nancy Romer is a labor and environmental activist.  She served on the Executive Council of Professional Staff Congress of CUNY (AFT #2334) for nine years. She is an active member of the PSC’s Environmental Justice Working Group and has served on the steering committees of Peoples Climate Movement-NY, Divest NY. She is on the National Working Group on Climate Justice for Democratic Socialists of America, and works with Labor Network for Sustainability. She is Professor Emerita Brooklyn College, CUNY.

For a petition to advance divestment of pension and other funds from fossil fuel holdings, please see  https://www.thepetitionsite.com/403/755/000/join-the-1000-cities-campaign-reject-fossil-fuels-amp-commit-to-100-renewable-energy/