In January Russia banned “The Death of Stalin". This may have been the first time in post-Soviet history a movie that had already been granted permission to screen was pulled from theatres by order of the government. What made the film so dangerous? 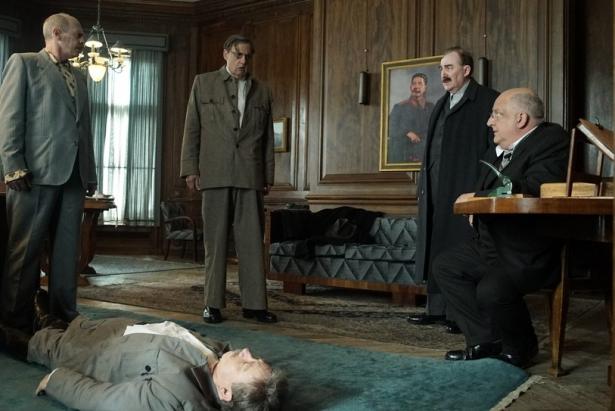 In the Scottish director Armando Iannucci’s film “The Death of Stalin,” everyone is afraid of being killed, all the time., Photograph by Nicola Dove / IFC Films

John Cheyne and William Stokes were nineteenth-century doctors who described a sort of labored, interrupted respiration sometimes seen among the dying. Their names have been part of everyday Russian language for sixty-five years, ever since the Soviet press announced that Joseph Stalin was ill and had “Cheyne-Stokes respiration.” The following day, March 5, 1953, came the announcement of Stalin’s death. Millions of people grieved in public (an unknown number died in a stampede, on the way to see Stalin’s body, marking a final act of senseless violence associated with the tyrant), and a small number celebrated in private. This year, as some Russians commemorated “Cheyne-Stokes Day” with Facebook posts, others laid four thousand red flowers at Stalin’s grave, on Kremlin grounds, in the center of Moscow. This was the sixteenth time that Moscow activists have held what they call “two carnations for Stalin,” an action honoring the memory of a dictator whom a growing number of Russians appear to view as a great leader and national hero.

In late January, Russia decided to ban the Scottish director Armando Iannucci’s film “The Death of Stalin,” which opens in New York on March 9th. This may have been the first time in post-Soviet history that a movie that had already been granted permission to screen was pulled from theatres by order of the government. What made the film so dangerous? A number of films about Stalin have been made in the past sixty-five years—including one in which Robert Duvall portrayed him as a creepy monster, and one entirely devoted to the tyrant’s bloody funeral—but this is the first movie that makes Stalin and his circle look absurd. In the first fifteen minutes, even before the generalissimus suffers his brain hemorrhage, Iannucci paints perhaps the most accurate picture of life under Soviet terror that anyone has ever committed to film.

In “The Death of Stalin,” everyone (with one possible exception) is afraid of being killed, all the time. As a result, a famous man wearing a bathrobe ecstatically conducts a Mozart concerto, as a literally captive audience sits in the hall, indifferent. Another man faints out of fear, after letting it slip that Comrade Stalin may not be the greatest classical-music expert in the world. At the very same time, Nikita Khrushchev, played by Steve Buscemi, drunkenly recounts to his wife everything he said or heard during a late-night party at Stalin’s dacha—and she writes it down, so that he may examine it in the morning in order to prepare himself for whatever punishment is coming. It all makes sense, because nothing makes any sense. Throughout the rest of the movie, after Stalin collapses in a puddle of his own piss and his inner circle immediately commences its struggle for power, no one says a word that he or she means—or, at least, not a word that he or she is not willing to retract immediately.

Iannucci shows something that few people understand about Stalin’s reign and its aftermath: that it was both terrifying and ridiculous, and terrifying in its ridiculousness. In a chilling scene, seven men, each of whom is hoping to succeed Stalin, debate a motion to “pause” arrests and executions and release some prisoners. They have no better reasons for sparing people’s lives than they had for condemning them, and they know this; their discussion is a tense ritual, the meaning of which remains obscure to everyone, including the participants. It’s easy to see how this would have offended the sensibilities of the Putin-era élite, which earnestly traces its lineage to Ivan the Terrible, Peter the Great, and Stalin—the bloodiest rulers in Russia’s bloody history. Putin’s Russia embraces its terrifying past but never its ridiculous past.

For the conspiratorially minded, another possible explanation for the ban comes halfway through the film. The pianist Maria Yudina (Olga Kurylenko), who has been engaged to play while Stalin lies in state, walks in, sees the body, and says, “Small. He looks so small.” This is the exact sentiment that the late oligarch Boris Berezovsky claimed Russian President Boris Yeltsin expressed upon being introduced to Vladimir Putin, in 1999.

A final possible explanation lies in the fact that the film shows Stalin to be mortal, and messily so. He seemed to think that he was immune from death; not only did he fail to put in place a succession plan but he also jailed all of the country’s best doctors. One might infer from the film that Putin is mortal, too—and that, like Stalin, he will die without a succession plan, and that his inner circle, like Stalin’s, will start fighting over his seat while he is still breathing.

A 2016 book by Joshua Rubenstein, “The Last Days of Stalin”—which is meticulously researched and not at all fictionalized or intentionally funny—portrays a Moscow in utter disarray for several years following Stalin’s sudden demise. The atmosphere of absurd unpredictability that emerges is comparable to the mood of Iannucci’s film. Given the similarity to the present day—a similarity apparent even to the Putin government, it seems—the book also offers some lessons for the present day. With Putin apparently intent on being the President for life, it is instructive to know that, as evinced by Stalin’s sudden death, the country can change quickly and unpredictably, in no small part because there are no beliefs or principles driving the behavior of any of the actors. Sixty-five years ago, the American foreign-policy establishment failed to understand this. Conventional wisdom in the United States also overestimated the cohesion and order of the Soviet system, and underestimated the importance of Stalin in shaping it and holding it together. Some American pundits even expressed the fear that, after Stalin’s death, hard-liners would come to power in the Soviet Union. Some of the same ideas pass for wisdom today, too: there is the idea that Putin’s role in shaping Putinism has been exaggerated, and the fear that, when Putin is gone, someone worse—more aggressive, more repressive, and more anti-American—will come to power. Putin might be right to both trace his heritage back to Stalin and fear the association. Meanwhile, many of the Russians celebrating “Cheyne-Stokes Day” this week were expressing hope for the doctors’ happy return.

“The Death of Stalin,” opened theaters in New York on March 9th.

[Masha Gessen, a staff writer, has written several books, including, most recently, “The Future Is History: How Totalitarianism Reclaimed Russia,” which won the National Book Award in 2017.]