Frail, Old and Dying, but Their Only Way Out of Prison Is a Coffin

Congress created compassionate release as a way to free certain inmates, such as the terminally ill, when it becomes “inequitable” to keep them in prison any longer. Despite urging from lawmakers of both parties, officials deny or delay the vast majority of requests. 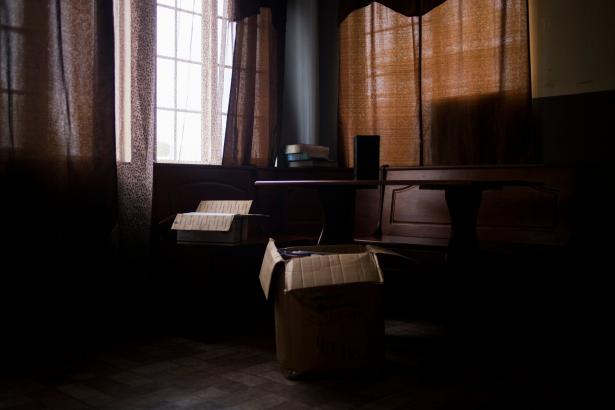 Kevin Zeich died shortly after his request for compassionate release was granted by the federal Bureau of Prisons. Only his belongings — and his ashes — made it to the home of his daughter, Kimberly Heraldez, in Bakersfield, Calif., Jenna Schoenefeld for The New York Times

Kevin Zeich had three and a half years to go on his prison sentence, but his doctors told him he had less than half that long to live. Nearly blind, battling cancer and virtually unable to eat, he requested “compassionate release,” a special provision for inmates who are very sick or old.

His warden approved the request, but officials at the federal Bureau of Prisons turned him down, saying his “life expectancy is currently indeterminate.”

Congress created compassionate release as a way to free certain inmates, such as the terminally ill, when it becomes “inequitable” to keep them in prison any longer. Supporters view the program as a humanitarian measure and a sensible way to reduce health care costs for ailing, elderly inmates who pose little risk to public safety. But despite urging from lawmakers of both parties, numerous advocacy groups and even the Bureau of Prisons’ own watchdog, prison officials use it only sparingly.

Officials deny or delay the vast majority of requests, including that of one of the oldest federal prisoners, who was 94, according to new federal data analyzed by The Marshall Project and The New York Times. From 2013 to 2017, the Bureau of Prisons approved 6 percent of the 5,400 applications received, while 266 inmates who requested compassionate release died in custody. The bureau’s denials, a review of dozens of cases shows, often override the opinions of those closest to the prisoners, like their doctors and wardens.

Advocates for the program say the bureau, which oversees 183,000 inmates, denies thousands of deserving applicants. Roughly half of those who died after applying were convicted of nonviolent fraud or drug crimes.

Mr. Zeich during his time in prison. When he made the request for compassionate release, he was nearly blind, battling cancer, and virtually unable to eat.CreditJenna Schoenefeld for The New York Times

“It makes sense to release prisoners who present very little danger to society. It’s the humane thing to do, and it’s the fiscally responsible thing to do,” said Senator Brian Schatz of Hawaii, a Democrat. “The Bureau of Prisons has the theoretical authority to do this, but they basically do none of it.”

Case files show that prison officials reject many prisoners’ applications on the grounds that they pose a risk to public safety or that their crime was too serious to justify early release. In 2013, an inspector general reported that nearly 60 percent of inmates were denied based on the severity of their offense or criminal history. The United States Sentencing Commission has said that such considerations are better left to judges — but judges can rule on compassionate release requests only if the Bureau of Prisons approves them first.

Late last month, Mr. Schatz introduced legislation — co-sponsored with Senators Mike Lee of Utah, a Republican, and Patrick Leahy of Vermont, a Democrat — that would let prisoners petition the courts directly if the bureau denies or delays their requests.

Many are turned down for not meeting medical requirements. Mr. Zeich, who was serving 27 years for dealing methamphetamine, requested compassionate release three times, but was repeatedly told he was not sick enough. On his fourth try, his daughter, Kimberly Heraldez, finally received a phone call in March 2016 saying her father would soon be on a plane, headed to her home in California.

Early the next morning, she was awakened by another call. Her father had died.

Mr. Zeich’s ashes now sit in a container in her closet alongside the splitting cardboard box of the possessions he had in prison: an insulin pump, glasses, stacks of medical records, and an album filled with photos of Ms. Heraldez and her three children.

“We brought him home,” Ms. Heraldez said, “but not the way we wanted to.”

When Anthony Bell applied for compassionate release in October 2014, he had served all but one of a 16-year sentence for selling cocaine.

Prison doctors treating his lupus and liver failure estimated that he had less than six months to live. It took about that long for the bureau to hand down its response: Denied.

After reading Mr. Bell’s medical records, officials concluded that he had more than 18 months to live. Two days later, he died.

“I begged them to please get him home,” said Mr. Bell’s sister, Denise Littleford, of Gaithersburg, Md. “And while the blood was still warm in his body, instead of sending him home in a body bag.”

Compassionate release dates back to an overhaul of federal sentencing laws in the 1980s. While abolishing federal parole, Congress supplied a safety valve, giving judges the power to retroactively cut sentences short in “extraordinary and compelling” circumstances. But a court could do so only if the Bureau of Prisons filed a motion on an inmate’s behalf.

For years, the agency approved only prisoners who were near death or completely debilitated. While nonmedical releases were permitted, an inspector general report found in 2013, not a single one was approved over a six-year period.

The report said the program should be expanded beyond terminal illness cases and used more frequently as a low-risk way to reduce overcrowding and health care spending. The Bureau of Prisons widened the criteria to explicitly include inmates over 65 and those who are the sole possible caregiver for a family member. Then Attorney General Eric H. Holder Jr. promoted the changes as part of his “Smart on Crime” initiative to “use our limited resources to house those who pose the greatest threat.”

But the bureau, which is part of the Justice Department, has yet to fully embrace those changes. Of those inmates who have applied for nonmedical reasons, 2 percent (50 cases) have been approved since 2013, according to an analysis of federal prison data. And although overall approval numbers increased slightly between 2013 and 2015, they have since fallen.

At a 2016 sentencing commission hearing, Bureau of Prisons officials said they believed the program should not be used to reduce overcrowding. And even the principal deputy assistant to Mr. Holder, Jonathan Wroblewski, said the program was not an “appropriate vehicle for a broad reduction” in the prison population. “Every administration has taken the position that part of our responsibility is to ensure that public safety is not undermined,” he said.

After the hearing, the commission released new guidelines encouraging prison officials to determine only whether inmates fit the criteria for release — that is, if they are old enough, sick or disabled enough, or if they are the sole possible caregiver for someone on the outside. Whether the prisoner poses a risk to the public should be left to a judge to decide, the commission said.

Mark Inch, who was appointed director of the Bureau of Prisons by Attorney General Jeff Sessions last August, has made no public statements about the program. The bureau declined to make Mr. Inch available for an interview and did not respond to emailed questions.

The inmates who meet the criteria for compassionate release tend to be among the oldest and frailest in the federal prison system, whose population is getting older and more expensive. The Bureau of Prisons spent $1.3 billion on health care in fiscal year 2016. Roughly 12 percent of prisoners are 55 or older, and of those, many will spend their final years behind bars. Some are dying in shackles.

When Andrew Schiff arrived at a medical facility for inmates to say his goodbyes, his dying 87-year-old father was unconscious and on a respirator. Yet he was cuffed to his hospital bed and under 24-hour watch by an armed guard, according to Mr. Schiff. “There’s no humanity in there,” he said.

His father, Irwin Schiff, had less than two years left on his sentence for tax fraud. He had tried and failed for two years to win compassionate release.

To win approval, an inmate must get the blessing of the prison warden, and must have an acceptable home waiting. Doctors at the facility assess whether the applicant meets the medical criteria, such as being completely disabled or having fewer than 18 months to live.

If the warden signs off, the application gets passed on to the Bureau of Prisons’ central office, which has its own medical director review the records. Even after the central office approves, the deputy attorney general may object. If approved, the request is passed on to a judge, who makes the ultimate decision. An analysis of federal prison data shows that it takes over six months on average for an inmate to receive an answer from the bureau. Almost 400 of the applications the bureau received between 2013 and 2017 are still awaiting a decision.

Most state prison systems have some version of compassionate release, sometimes known as medical parole. Nationally, prisons are facing an explosion in elderly inmates, but officials can still be wary of the idea of letting them out early. Recently, a Senate committee in South Dakota turned down the prison system’s request to establish a similar program, citing concern over releasing violent offenders.

In recent months, both Democratic and Republican lawmakers have called on the Bureau of Prisons to speed up the federal process and grant more requests. Senator Richard Shelby of Alabama, a Republican, pressed the bureau for details on how it was improving the process in a report he submitted with the 2018 appropriations bill. A bipartisan group of senators, led by Mr. Schatz of Hawaii, wrote a letter last August saying they were “deeply concerned” that the bureau was failing to carry out its duties under the program.

The Justice Department’s Office of Legislative Affairs issued a response in January, citing approval rates that were slightly higher than those reflected in the data provided by the Bureau of Prisons to The Marshall Project and The New York Times. The bureau did not explain this discrepancy.

The January letter stated that cases were most commonly denied because inmates did not meet the criteria or lacked a stable place to live if they were released. But in 2016, officials turned down one of the oldest federal prisoners, 94-year-old Carlos Tapia-Ponce, on the grounds that his crime, a role in a large-scale cocaine trafficking operation, was too serious. He died the following month.

Tommy Leftwich died in prison last September. He had been serving 12 years for making meth when he was diagnosed with advanced liver cancer. The bureau said in October 2016 that his early release would “minimize the severity of his offense and pose a risk to the community,” noting a history of drug offenses and impaired driving.

Wayne “Akbar” Pray, 69, who has served nearly 30 years of a life sentence for running a New Jersey cocaine operation in the 1980s, first applied for compassionate release under the elderly inmate provision in 2013. His supporters included his warden, the current and former mayors of Newark, the local N.A.A.C.P., and several former members of Newark law enforcement.

In January, the bureau denied his request, pointing to the severity of his crime and his conduct in prison.

According to his disciplinary history, Mr. Pray’s last violation was 20 years ago, for “improperly storing property and failure to follow sanitation procedures.”

Christie Thompson is a staff writer and Anna Flagg is an interactive reporter for The Marshall Project, a nonprofit news organization that focuses on criminal justice issues.