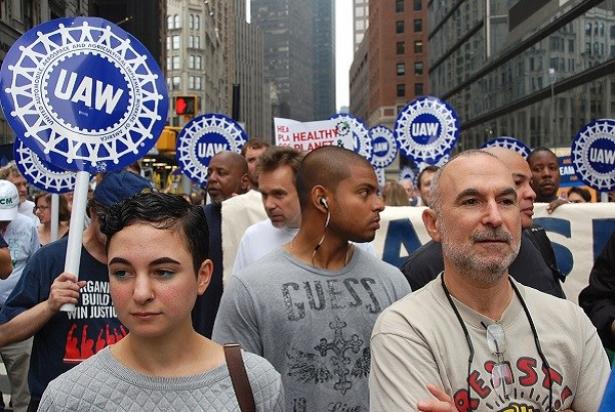 Every January, the Bureau of Labor Statistics (BLS) publishes union membership figures for the United States.[i]  For many decades now, these annual reports have provided a numerical profile of organized labor’s decline. Yet the recent BLS report for 2017 shows a different picture, indicating a rise in unionization, including among young workers. The report is being interpreted by many as a reflection of significant new organizing.[ii]  While increased membership figures and density are important, because they are rough measures of workers’ power in an industry or the economy as a whole, I would suggest that we refrain from viewing  the uptick in union membership for 2017 as a sign of increased success in union organizing. A closer look at the numbers tells a different story.

The BLS in its yearly report presents year-on-year changes.

First—the data are compilations from survey questions asked of household members.  The main question on unions is, “On this job, are you a member of a labor union or of an employee association similar to a union?”  The numbers are often read as an indication of how many workers are joining unions—or of the success of organizing drives.  But being represented by a union does not mean there was a successful organizing drive.  Results of NLRB supervised union elections bear this out:  In fiscal 2017, only 79,750 workers were eligible in representation elections; only 37,631 voted for unionization.[iii]  These data do not consider the perennial challenge of gaining a first contract, which is a necessary step in the unionization process under current law.  Granted, some union organizing drives are conducted outside the NLRB process; and public sector campaign data is collected on a state-by-state basis.  It seems clear that the additional 262,000 employees reporting that they are working union is not a direct consequence of organizing campaigns, but largely the result of new jobs added in already unionized workplaces.

In this way, unionization data is tied not only to organizing, but significantly to  the condition of the economy and to hiring patterns in unionized sectors..  When a unionized manufacturing firm adds workers or a whole shift, unionization figures rise.  Similarly, when unionized construction contractors hire new workers, membership can increase without a great deal of new organizing.  Conversations with organizers across the labor movement confirm this—in construction, manufacturing, trade and the public sector, organizers familiar with their own unions’ organizing efforts cannot account for the BLS increases solely on the basis of their own organizing campaigns. 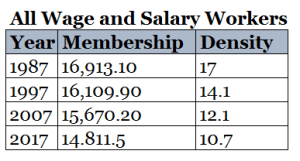 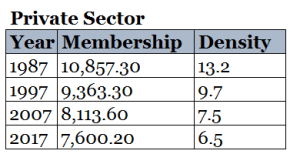 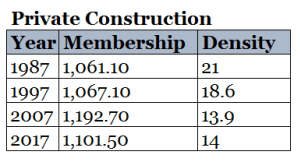 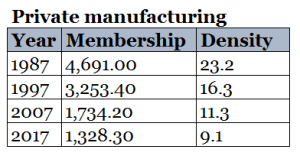 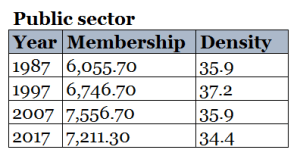 The U.S., as a part of the world economy, has undergone fundamental transformations over the course of the past generation.  Geographically, production has shifted both within and beyond U.S. borders.  New labor-saving technologies have been introduced in many industries.  Politically—at the national and state levels—circumstances have often been unfavorable for organized labor.  These transformations have thrown organized labor onto the defensive, especially in private sector industries that had long been strongholds of the movement.  This has resulted in labor’s inability to alter the downward course of membership and density figures.

At the same time, the long-term numbers show that public sector density has kept pace with the expansion of the state.  Within the overall figures, there has been systematic upward movement in density in the public sector in a handful of states with relatively favorable legal context and active organizing programs.  Public sector density has increased significantly in Washington, California, Texas, Illinois, Vermont, Connecticut, New Hampshire, New Jersey in the three decades since 1987.  Meanwhile, unsurprisingly, where public sector labor law grew unfavorable, in states like Wisconsin, for example, density fell dramatically.  Is it any wonder that anti-union conservatives are targeting public sector workers, as in the Janus v. AFSCME case currently before the U.S. Supreme Court?

Union organizations that have built up robust internal organizing programs, that are dedicated to member involvement in external organizing, and that have been able to build alliances with their wider community have been able to resist anti-union employer efforts.  Unions’ ability to transform quantitative capacity into qualitative power, through such member mobilization and alliance building, has often spelled the difference between victory and defeat in being able to defend union wages and working conditions.

The BLS figures—particularly in the longitudinal Hirsch/Macpherson compilation—can be broken down by sector and geography to portray dramatically the decline in density and membership over the past decades.  Organizers can use such figures to help make the case for new organizing.  But the new BLS numbers should not serve as cause for celebration, but rather an indication of the continued need for aggressive organizing, especially in light of the pending Janus v. AFSCME decision likely to bring a steep decline in public sector unionization.