At the Antiquarian Book Fair, gastronomical books are among the show-stoppers 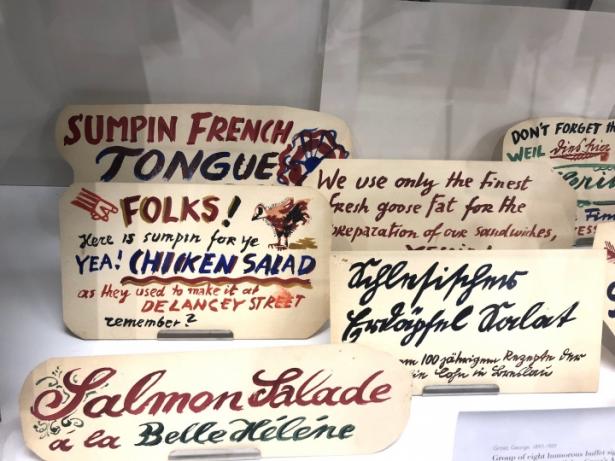 “It’s dangerous to collect books as a seller,” said Michael Laird, one of the rare books sellers at the New York Antiquarian Book Fair, currently at the Park Avenue Armory. “Because then you have to sell them.” And they’re not exactly an easy sell — the average price of most books at the fair is in the thousands of dollars.

At first glance, a copy of J.D. Salinger’s Nine Stories might not look so different from one you might find at a used bookstore, until you discover its “exceptional” condition will cost you $6,500. Every book on display is accompanied by a label filled with flowery adjectives to whet the buyer’s appetite. The Innocent Abroad, by Mark Twain, is described as “a very bright copy … with the scarce publisher’s prospectus,” and priced at $9,500, while “a lovely copy” of Adventures of Huckleberry Finn is going for $12,500. Among the cheapest items I could find at the fair was a woman’s suffrage broadside, “Taxation Without Representation is Tyranny,” for $125.

While most of the booksellers are as overwhelmingly reserved, white, and male as most gallerists at art fairs, there are some sellers who are eager to share their knowledge, even if you aren’t buying anything. Laird, for instance, excitedly pulled out a delicate book from 1767 about “the revenge of Merner the kitty” — an animal who goes to hell for not being buried properly. And, he says, if one item were to win the “geek contest prize” it would be his 1814 sales catalogue from the library of a “noted Dutch theologian.” Equally delightful is the business card of Electibles, a collection that specializes in childhood ephemera and books; one side of the card cites a poem titled “Book Flirtation,” from a series of Victorian “flirtation cards,” in which the first line reads, “Holding upside down, Do you love me?”

The obvious show-stopper at the fair is the first edition of Copernicus’s 16th-century text in which he argues for his heliocentric theory — going for no less than $2 million. My personal favorite, however, are the culinary offerings of Ben Kinmont’s collection.

The lists of food and drink items in these gastronomical books are like poems in themselves, from the types of wine listed in a 1829 treatise on the Art of Making Wine (gooseberry, currant, brisk, leaves and tendrils, cowslip, and apricot) to the 12 kinds of pâté listed in a 1791 French restaurant’s menu, which is described as “a truly astonishing survival.” Other highlights include Joseph Berchoux’s 1801 poem on “the pleasures of the table” that is thought to have popularized the term “gastronomie” and a 17th-century French cookbook in which “the author provides directions for folding napkins in twenty-six different forms, including one for a turkey.” One of the most surprising items is a medical manuscript from 1670-90 on eating disorders, in which the author recommends wine and absinthe as cures.

The Antiquarian Book Fair is overwhelming, with dozens of books to discover at each of the 200-plus booths. Many of the exhibitors come from either the US or France, and a lot of the time you’ll see familiar, big-name titles, from vintage copies of Ulysses to various ephemera related to Catcher in the Rye. If you dig deeper, however, you’ll find the true treasures, like a book solely dedicated to colorful silk tassels.