Under Trump, a New Golden Age for Payday Lending

A deregulatory push led by top-level Republicans could turn back the clock to the heyday of predatory lending. 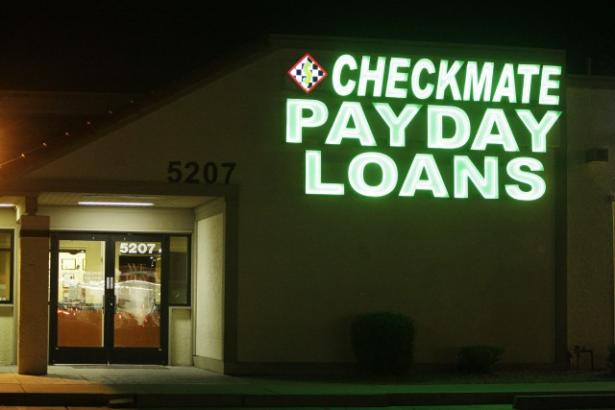 Payday lenders—those usurious operations that profit from providing high-interest loans to working-class and poor Americans—have seen their prospects improve dramatically under the Trump administration and the Republican Congress.

A joint resolution introduced last week by South Carolina Republican Senator Lindsey Graham would eliminate strict regulations on short-term, small-dollar lenders imposed by the federal Consumer Financial Protection Bureau (CFPB) and prevent the agency from issuing a similar rule in the future. The resolution marks the latest attempt to defang the CFPB, which became the bête noire of the payday loan industry in the years following the financial crash.

The rule, which among other things would obligate lenders to confirm that people can actually afford to repay their loans, was set to go into effect in January but was put on hold by the interim head of the CFPB, Trump appointee Mick Mulvaney.

The rule, which among other things would obligate lenders to confirm that people can actually afford to repay their loans, was set to go into effect in January but was put on hold by the interim head of the CFPB, Trump appointee Mick Mulvaney. While the CFPB “reconsiders” the law, Mulvaney has reportedly granted waivers to companies that would otherwise have to begin to comply, to the delight of the payday lending industry. His decision represented a sharp break from the CFPB’s past actions under former head Richard Cordray, a Barack Obama appointee who did not shy away from cracking down on predatory lending practices during his tenure.

On Tuesday, more than 40 Senate Democrats signed a letter to Mulvaney, expressing concern over the bureau’s decision to reconsider the new payday loan rule and urging him to keep it intact. But Congress could overturn the rule more quickly than the now-Trumpified CFPB, given the time-consuming notice and comment procedures the agency would need to perform. Graham filed his resolution under the Congressional Review Act (CRA), which allows legislators to nix new regulations that aren't passed by Congress within 60 days of their going into effect. Under the no-cloture-requirement CRA, a simple majority in each chamber is all it would take to scrap the rule altogether.

A companion resolution has already been filed in the House, receiving support from three Democrats and 32 Republicans. A greater challenge for critics of the rule awaits in the Senate, where Republicans have struggled to round up 51 votes in the past. Graham, who voted in October against nullifying a CFPB rule that allows consumers to engage in more class-action lawsuits against financial companies, could provide a key vote. Of the six Senate Democrats who did not sign the letter to Mulvaney, four are facing re-election in states that Trump won.

The nearly all-out Republican assault on CFPB regulations can be seen as a considerable return on the past eight years of campaign contributions from the payday loan industry and its lobbyists. The passage of the Dodd-Frank Act in 2010 and the resulting formation of the CFPB in 2011 caused a spike in donations, according to data from Open Secrets. Payday lenders have given nearly $9 million to members of Congress since 2012, the year donations peaked. Of that, $7 million went to Republicans. Mulvaney himself received nearly $63,000 in campaign donations while serving in Congress (he stepped down in 2017 when Trump appointed him to head the Office of Management and Budget).

In a leaked January memo to CFPB staff, Mulvaney left no doubt that big changes were coming at the bureau. Henceforth, he wrote, the CFPB would focus on helping not just consumers but the businesses, too—as he put, it, “those who take loans, and those who make them.” Enforcement of regulations would be dialed back and complaints related to payday lending would take the backseat to complaints related to debt collection. A few days before issuing the memo, Mulvaney dropped a lawsuit against four payday lending companies in Kansas accused of charging interest rates of nearly 1,000 percent. That same month, he ended an investigation into the marketing and lending practices of World Acceptance Corporation, one the nation’s largest payday lenders, and a donor to Mulvaney’s congressional campaigns.

Mulvaney has rejected suggestions of any potential conflict of interest caused by the donations to his congressional campaigns.

Twelve million Americans use payday loans each year, according to data from the Pew Research Center, racking up more than $9 billion in interest, penalties, and fees.

Twelve million Americans use payday loans each year, according to data from the Pew Research Center, racking up more than $9 billion in interest, penalties, and fees. Most borrowers end up paying more in interest, penalties, and fees than they originally received in credit. Payday lenders say that they’re filling a gap left in low-income areas underserved by large banks. Consumer advocates argue that their services do far more harm than good. Without options for short-term loans, many working-class and low-income people facing unexpected expenses are forced to go to a lender. Most borrowers find themselves unable to repay their debts in time and are left to choose between defaulting on their loans or borrowing more money, almost always opting for the latter. Close to 80 percent of loans are renewed within 14 days, according to the CFPB, leading to so-called “debt traps” for the borrowers.

In the past, the task of reining in small-dollar lending had largely fallen to state legislatures (15 states have essentially blocked payday loan abuse by capping rates at a low level or enforcing other laws). The new CFPB rule would have been the first major federal regulation of the industry. Instead, it moves one step closer to being swept up in the whirlwind of deregulation unleashed by the Trump administration.

Manuel Madrid is a writing fellow at The American Prospect.

Independent, fact-based journalism is more important than ever. As a nonprofit, The American Prospect relies on donors like you to help us maintain journalistic integrity and provide strategic solutions to our nation's most pressing problems.  Make a one-time gift or a monthly contribution to The American Prospect here.