labor The Larger Concerns Behind the Teachers' Strikes

For educators in Oklahoma and other states, the strike demands go far beyond better pay. The strike gets at the heart of some of the biggest issues facing America’s children: access to  effective teachers, high-quality learning materials, and modern facilities. 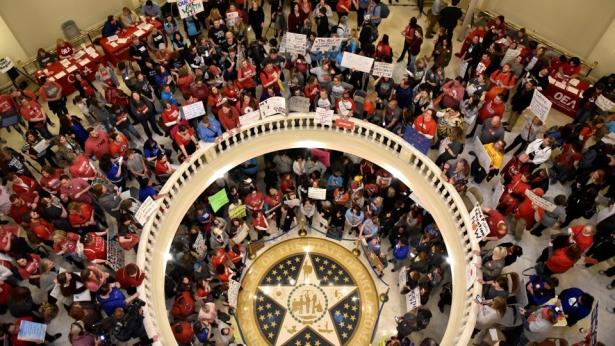 One demand of the striking Oklahoma teachers has gotten a lot of attention: They want higher salaries. Superficially that demand may seem like a somewhat selfish concern—a question of their own bank accounts, not students’ needs. But the teachers’ complaints go far beyond compensation, and when viewed in the context of their other demands, it’s clear that the strike gets at the heart of some of the biggest issues facing America’s children: access to  effective teachers, high-quality learning materials, and modern facilities.

Thousands of teachers returned to the picket lines on Tuesday in their effort to secure more education funding from state legislators, forcing the cancellation of classes for public-school students in Oklahoma City and Tulsa. The picketing marked the continuation of a strike that kicked off on Monday, when tens of thousands of educators in about a third of Oklahoma’s school districts walked out, affecting 300,000 of the state’s 500,000 students.

The Oklahoma legislature last week passed a bill raising teacher salaries by $6,000 on average and restoring education funding by $50 million, but educators say it’s not enough given the cuts they’ve contended with in recent years. They are asking for $10,000 more per teacher over the next several years and $200 million in restored education funding. The legislature had been cutting education spending for years, with the amount of per-student funding dropping by nearly 30 percent (when adjusted for inflation) over the past decade, according to the liberal Center on Budget and Policy Priorities. Oklahoma leads the nation in inflation-adjusted cuts to education funding since the 2008 recession.

The situation has gotten so bad that schools have suffered from chronic textbook shortages and dilapidated facilities; some news coverage has recounted stories of severely outdated, damaged teaching materials and school buildings whose broken heating systems leave students shivering in the winter. Alexia Campbell, a reporter at Vox, tweeted photos showing deteriorated textbooks. Many districts have had to shorten their weeks to four days because they can’t keep campuses running all five days.

“Why are we here today?” one teacher, Dionne Liebl, asked a crowd gathered at the Oklahoma City capitol on Monday, according to CNN. “We are here today because our schools, our children need us.”

The Oklahoma teachers’ strike has a lot in common with an earlier strike last month in West Virginia, where classrooms across all of its 55 counties were shuttered for nine school days. Like West Virginia’s teachers, educators in Oklahoma are demanding higher pay and better benefits—but they’re also similarly driven by an underlying mission to improve the quality of public education offered in their state.

That latter goal is key to understanding the Oklahoma teachers’ walkout—which, at least for some districts, is poised to last at least a few more days—as well as that in West Virginia. In these states (and potentially others yet to come), a strike may be the most effective pathway for securing more investment in public schools and creating educational equity.

As Joshua Weishart, an associate professor of law and policy at West Virginia University whose research centers on education law, told me last month, coordinated teacher demonstrations, such as picketing, are emerging as one of the dominant ways for a society to decide what public education will be. Historically, the courts have led the way on that conversation, mandating certain funding levels or desegregation, but the judiciary has in recent decades retreated from that role. “So what do the people do when the courts are reluctant to intervene and the other branches of government have failed them for so long?” Weishart asked. “They either quietly accept their fate or they publicly resist and demand change.”

Other states may soon see similar fights. For example, in Arizona, which according to data from the National Education Association in 2016 reported some of the lowest per-student spending in the country, educators want a 20 percent pay raise and the restoration of funding cuts. But so far state policymakers have shown little willingness to heed the demands. Teachers in Arizona have also been campaigning for a ballot measure that would increase the sales tax for education.

In Kentucky as well, educators have been demonstrating, with teachers across 29 districts staging a sickout on Friday and convening at the state capitol. The protests there have explicitly focused on prospective negative changes to teachers’ retirement benefits, but educators have made it clear that better teacher compensation is intertwined with school quality. A proposal to reform Kentucky’s pension system would reduce benefits for current and future retirees, and the local teachers’ union says the plan would incentivize qualified educators to leave the state. “We are heavy on people that are eligible to retire. And we are heavy on people that have five years or less of experience,” Kentucky Education Association President Stephanie Winkler told the Lexington Herald Leader last fall. “If all those people retire and all those people leave the profession because they’ve had a promise broken to them, there will be nobody left to educate our children if this proposal comes to fruition as presented.”

Indeed, as West Virginia’s educators made clear, teacher compensation can’t be divorced from educational quality; livable wages are needed to attract and retain qualified teachers. Politicians “are fussing about test scores,” Rebecca Lindsey, a kindergarten teacher in West Virginia, told me last February. “Well, you need to put qualified educators in the classroom if you want your test scores to go up.”

Alia Wong is an associate editor at The Atlantic, where she oversees the education section. She previously wrote for Honolulu Civil Beat.