books Other People’s Children, Part 2: Stories in the Aftermath, or “The Hate U Give”

The March 18 killing of 22-year old Stephon Clark by Sacramento Police once again calls our attention to the racist aspect of the problem of civilians murdered by law enforcement. Angie Thomas's award-winning Young Adult novel is among the most recent literary responses to this crisis. 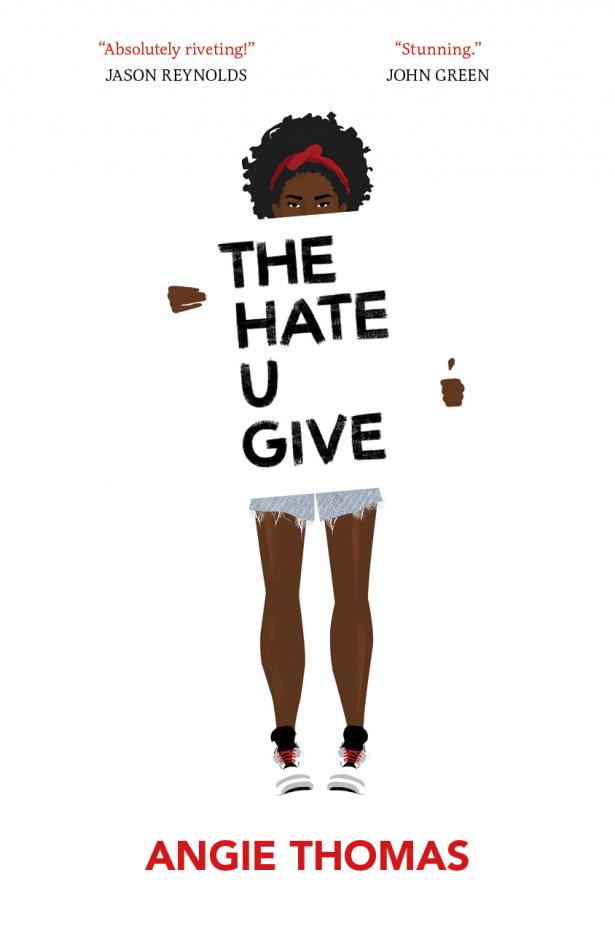 The Hate U Give

THE HATE U GIVE takes place mostly in the aftermath of a violent incident, told to us wrenchingly by Starr, a young African-American woman who witnesses her childhood friend gunned down by a policeman during a traffic stop. The murder — for murder it is, motivated by fear of a young, unarmed black man — takes place early in the novel’s chronology, and Starr spends the remainder of the book’s 400-plus pages turning over the incident in her mind, again and again, as she tries not only to work through the psychological trauma but also to figure out what an appropriate political response might be.

Young adult fiction has not shied away from difficult subject matter, and one could not have hoped for a better book about police brutality against young black folk. Angie Thomas, the book’s 30-year-old author, has delivered a powerful novel that strikes to the heart of contemporary race relations in the United States. Moreover, she pulls no punches in educating her readers about the difficulties facing young African Americans growing up in a culture that incarcerates and murders them at alarming rates.

Part of what makes The Hate U Give so powerful is that Thomas doesn’t pitch the novel as merely an exploration of the emotional aftermath of trauma, but rather explores through Starr and her family a longer history of traumatic relations between whites and blacks in this country. The personal trauma is certainly there: the pounding baseline of a rap song heard on the radio all too easily recalls the staccato gunshots that killed her friend. But Thomas interweaves the specific trauma of this incident with the more general difficulty of growing up black in the United States. Starr’s parents actively educate her and her siblings about racism, giving advice about how to handle themselves when interacting with white people and tutoring them in the history of activism that has sought to raise awareness about the consequences of racism for all Americans. Poignant moments focus on how Starr, living in Garden Heights, a gang-ridden neighborhood in a nameless city, repeats the mantra she learned from her family to govern her behavior if she is ever stopped or questioned by cops:

Keep you hands visible.
No sudden moves.
Only speak when spoken to.

Thomas also excels at rendering the experience of double consciousness, the way African Americans, in the words of W. E. B. Du Bois, are “always looking at one’s self through the eyes of others.” Starr’s parents send her to a prep school in the suburbs, hoping she’ll use her education to make a good life for herself. While there, Starr meditates on the double life she lives, and her need to monitor her behavior at school so other kids don’t think of her as “ghetto.” More painfully, she can’t readily bring herself to talk about her friend’s murder for fear that she’ll lose control, which could lead her white friends to cast her in the stereotypical role of the angry black girl. So she remains largely silent; “I can’t stand myself for doing it, but I do it anyway,” she says.

At the same time, Thomas includes numerous passages that link the lives of her characters to historical figures, such as Tupac Shakur, whose “thug life” stance serves as the core ethic of the book. Tupac’s lyrics and philosophies permeate the story: several conversations between Starr and others, particularly her father, discuss Tupac’s activism and his use of his art to address racism. The title of the book comes from Tupac’s acronym for “thug life”: “The hate u give little infants fucks everyone.” Thomas is well aware that Tupac was a controversial figure, but she makes no apologies for her use of his work or for his parents’ connections to the Black Panther party. In fact, Starr’s father has his kids recite the Panther’s Ten Point Program every day as part of their counter-education in American history, politics, and race relations.

As the foregoing might suggest, The Hate U Give functions not only as a timely, potent story but also as a deeply pedagogical novel, reminding black kids in similar circumstances that they are not alone while also educating naïve white readers about what it’s like to grow up black. Thomas risks some stereotypes here: the young man killed early in the book had been involved in selling drugs (though not at the time of his murder), and Starr’s father is an ex-con himself. Much as in Walter Dean Myers’s extraordinary novel Monster (1999), which follows a young black kid on trial for murder, The Hate U Give doesn’t sugarcoat the experiences of some African Americans. Its willingness to go to the hard places challenges readers to consider, for instance, if a young black man deserves to die regardless of his criminal history. As we learn more about Khalil, we discover that his drug dealing was driven by hunger and poverty, forcing readers to meditate on the limited choices facing many young people across our country.

Once again, the inclusion — and strong positive valuation — of Tupac’s work seems an attempt to rewrite how the dominant culture understands controversial black celebrities and the difficulties facing many inner-city black folk. In a recent talk at the University of California, Irvine, Thomas described watching a video of Tupac spitting on paparazzi and wondering how she could square that behavior with his defense of black people and his attacks on racism. She recounts being moved when hearing him sing to young black women, just like her, growing up on welfare in the song “Keep Ya Head Up”:

Some say the blacker the berry, the sweeter the juice
I say the darker the flesh then the deeper the roots
I give a holla to my sisters on welfare
2Pac cares, if don’t nobody else care

Throughout his work and career, Tupac seemed to reach out compassionately while still fiercely expressing his anger and frustration. Anger and compassion, outrage and sensitivity, rage and delight — these are not contradictory emotions but part of the affective spectrum characterizing the experiences of many who grow up in a culture that hates them. Recognizing this hate, while also cultivating counter-narratives to survive and learn to love oneself and others like oneself, comprises more than just the psychology of double consciousness; it defines the basic politics of survival.

Sherman Alexie has said that the best children’s books are “written in blood,” by which I believe he means that we should be giving our young people books that frankly and honestly address the insane contradictions and glaring errors of how we live with one another. There’s plenty of blood in The Hate U Give, but there’s also plenty of hope. Following Tupac, Thomas understands her art as activism. It’s messy and difficult, but it’s raising awareness nonetheless.

Thomas remains a realist, however. At one point near the end of the novel, Starr meditates on how

the Ten-Point Program didn’t work for the Panthers. Huey Newton died a crackhead, and the government crushed the Panthers one by one. By any means necessary didn’t keep Brother Malcolm from dying, possibly at the hands of his own people. Intentions always look better on paper than in reality.

The Hate U Give offers a set of powerful intentions, albeit on paper. If the novel has a fault, it is perhaps that Starr is a bit too adaptable, a bit too ready with an answer, quip, or insight. She’s seen things that children shouldn’t have to see and, as a result, should be perhaps a bit more traumatized than she is.

Thomas is clearly counting on the power of story to work as force in the world, offering us a mirror for ourselves and a lamp to guide us to a better place. That place must necessarily, at this point, be in the aftermath of much trauma and difficulty. And an aftermath can be a long and painful process. The Hate U Give marks the time spent in that aftermath and the damage done, but it also models artful and essential responses.

Part one of “Other People’s Children” can be found here.

Jonathan Alexander is Chancellor’s Professor of English at the University of California, Irvine. His most recent book is Writing Youth: Young Adult Fiction as Literacy Sponsorship (Rowman and Littlefield, 2017).