An Illustrated Essay: Why I Love the Real Marjory Stoneman Douglas

The spirit and sass of the Parkland school’s namesake live on in the million young anti-violence activists who have risen up since the shooting. 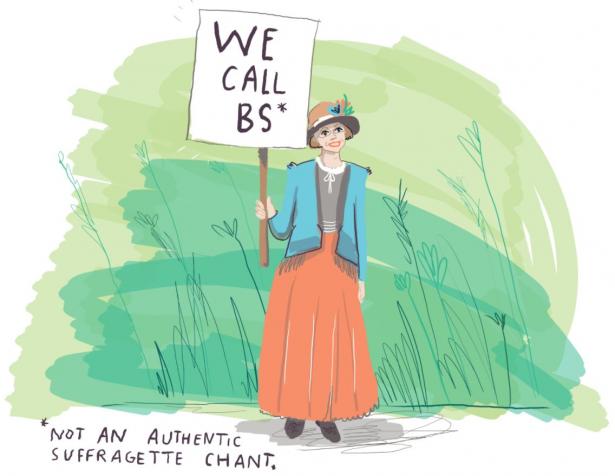 In April 1917, Marjory Stoneman Douglas boarded a train in Miami with a bunch of other charismatic suffragettes. Their destination was the state capital, Tallahassee, where they would eloquently make the case for women’s right to vote. “We could have been talking to a bunch of dead mackerel, for all the response we got,” said Douglas. She had little respect for the “wool-hat boys,” the condescending, small-minded boors who were the state representatives. The women’s entreaties fell on stupid ears, and Marjory Stoneman Douglas would later remark that she was speaking “over the heads of the audience, to a future generation.”

That generation is here. 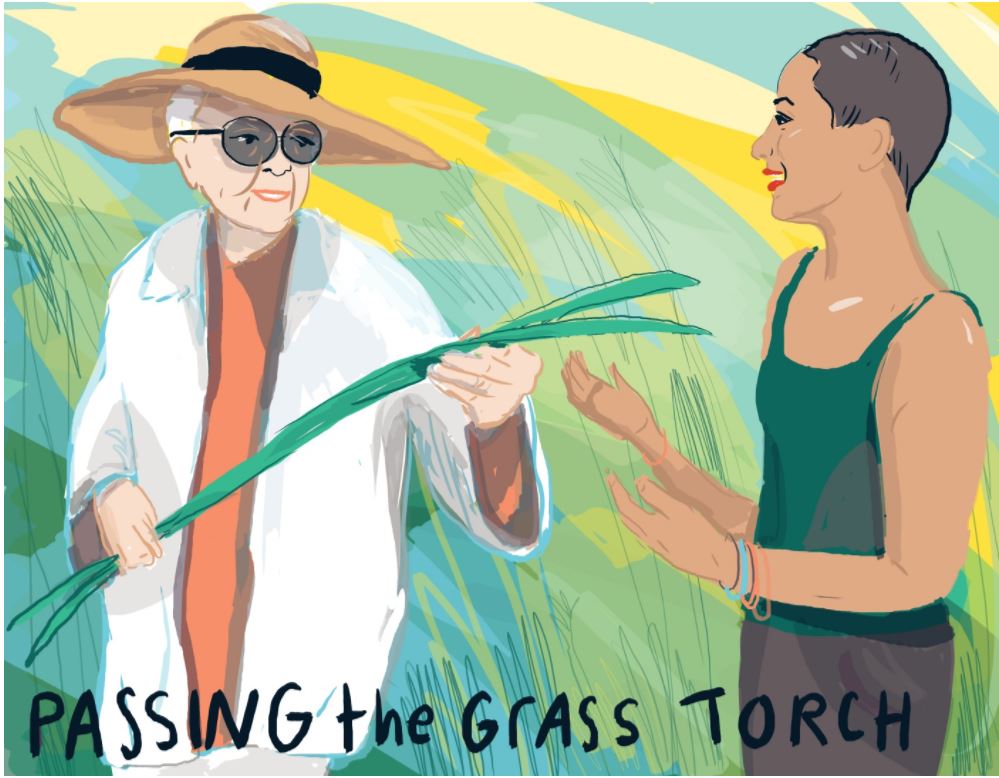 Over the past month I’ve fallen in love with Marjory Stoneman Douglas. I grew up not far from the school in Parkland that bears her name, where a mass shooting left 17 people dead and ignited a million young anti-violence activists. Yet, in my 20-odd sunburnt years in Florida, I had never once wondered who she was. The horror of the Parkland shooting changed all that. How did I not know she had been Miami’s champion of women’s suffrage, civil rights, and the Everglades? How had I not known about this unconventional wit and writer and activist? The one who wore giant hats, slept until 10, wrote all day, and went dancing whenever she could. 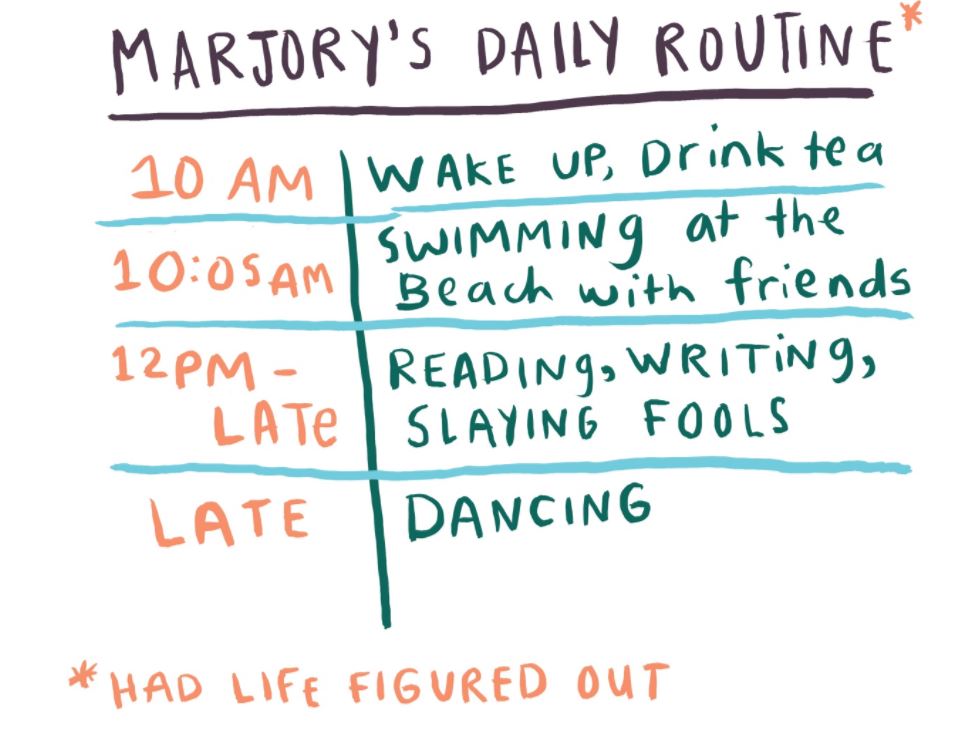 Stoneman Douglas had fabulous oratory skills (if you don’t mind her saying so) that she got during her time at Wellesley College. She referred to herself as The Elocutioner, which was an apt superhero name for someone who could convince rowdy rooms to see straight on issues ranging from women’s rights to protecting migrant workers. A reporter once remarked that “she had a tongue like a switchblade and the moral authority to embarrass bureaucrats and politicians and make things happen.” 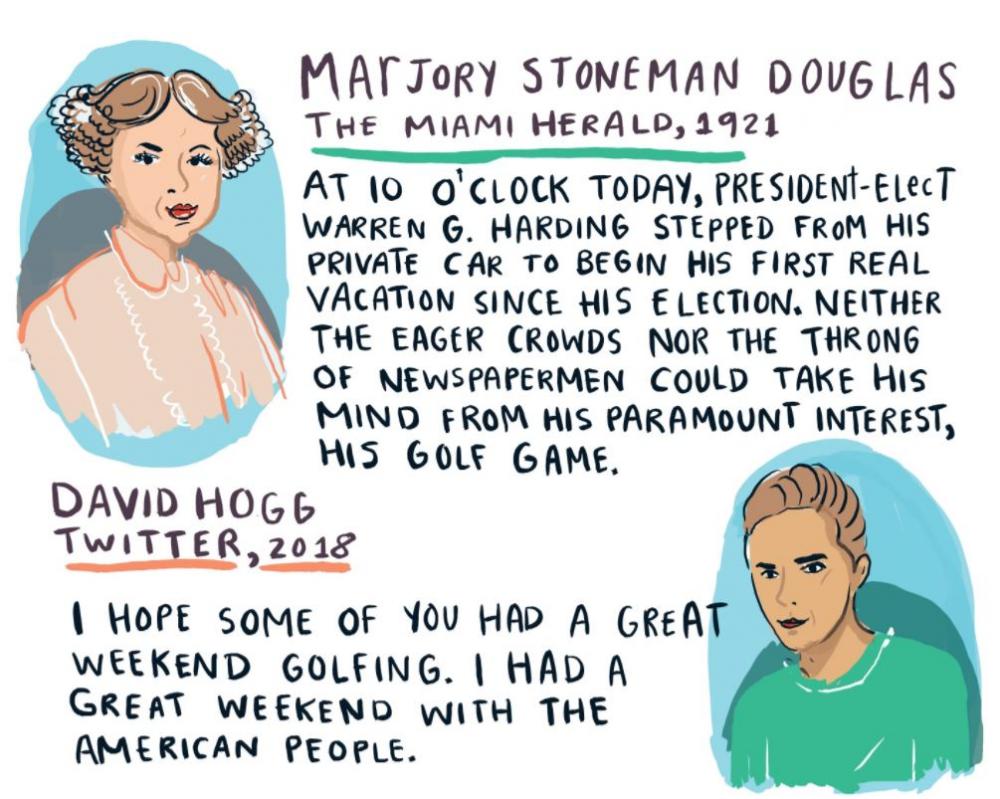 They are, in a very real way, her students. 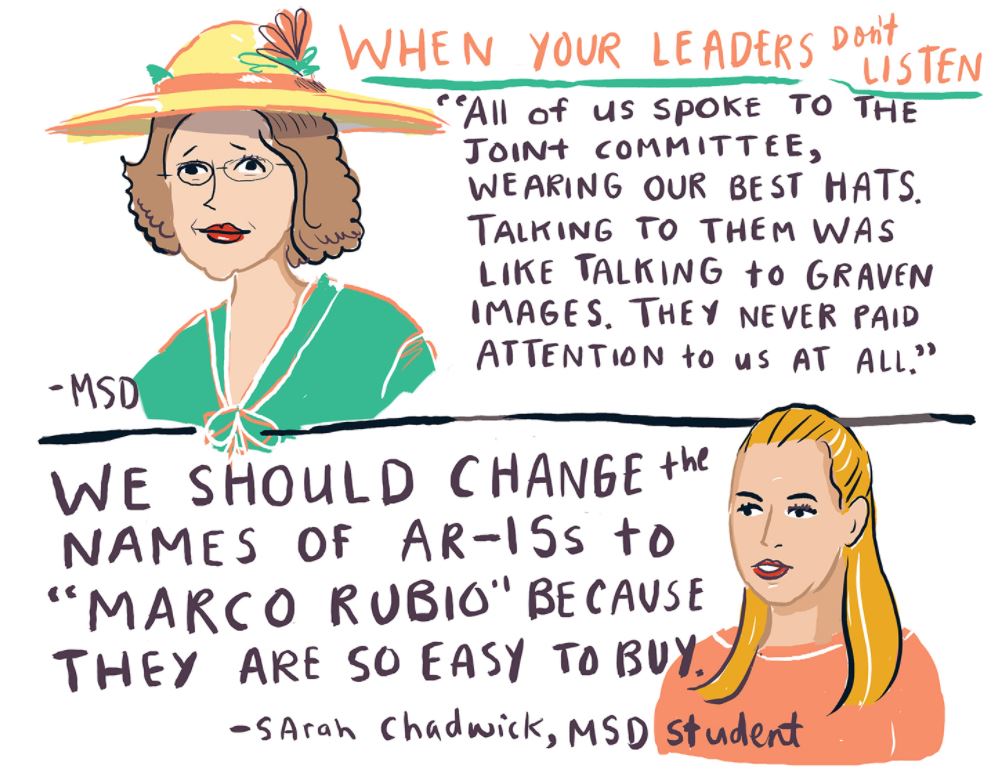 It’s impossible not to imagine how proud Stoneman Douglas would have been of everything these students have done. They were forced to become activists overnight, and they’ve handled the job so compellingly that the world is listening.

Stoneman Douglas herself took the long road to activism. For years she argued for good sense on many issues in her sharp and pleasantly zany Miami Herald column, "The Galley." But it was only in time that she became the activist Florida needed her to be. The Everglades: River of Grass, Douglas’ first book, was published when she was 57. Of course, when you live to 108—which she did—that’s barely middle age. 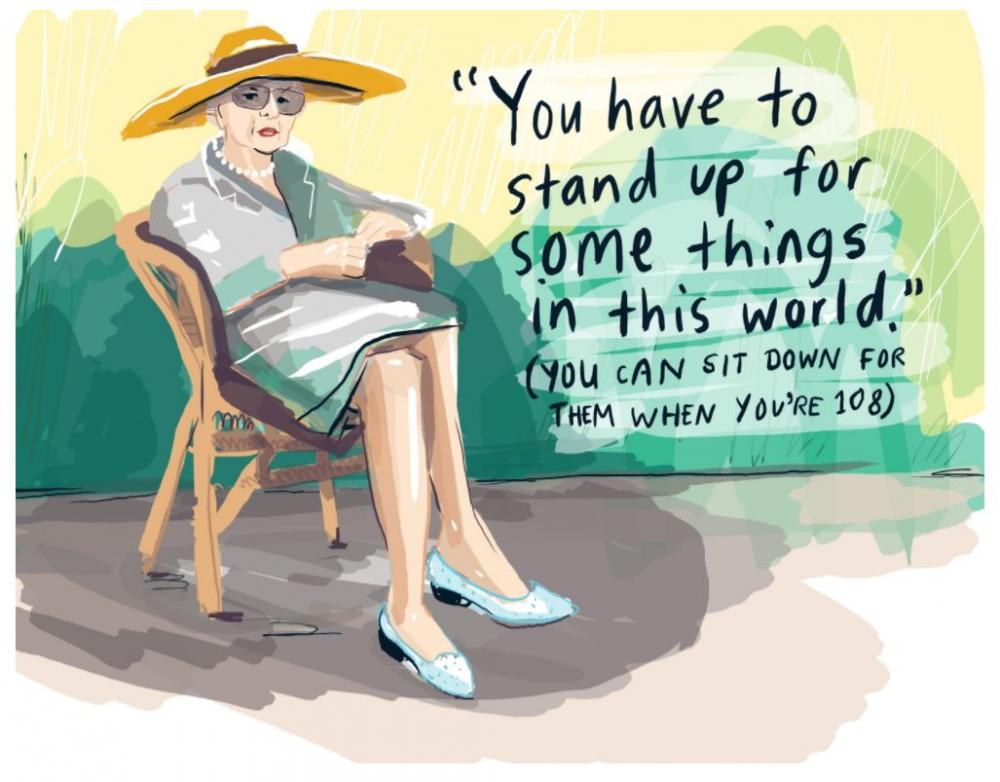 River of Grass sold hundreds of thousands of copies and forced the world to care about the Everglades. My favorite historical photo is of Douglas signing copies of her book in Burdines, a Florida department store where I spent my mallrat years buying Hypercolor t-shirts. 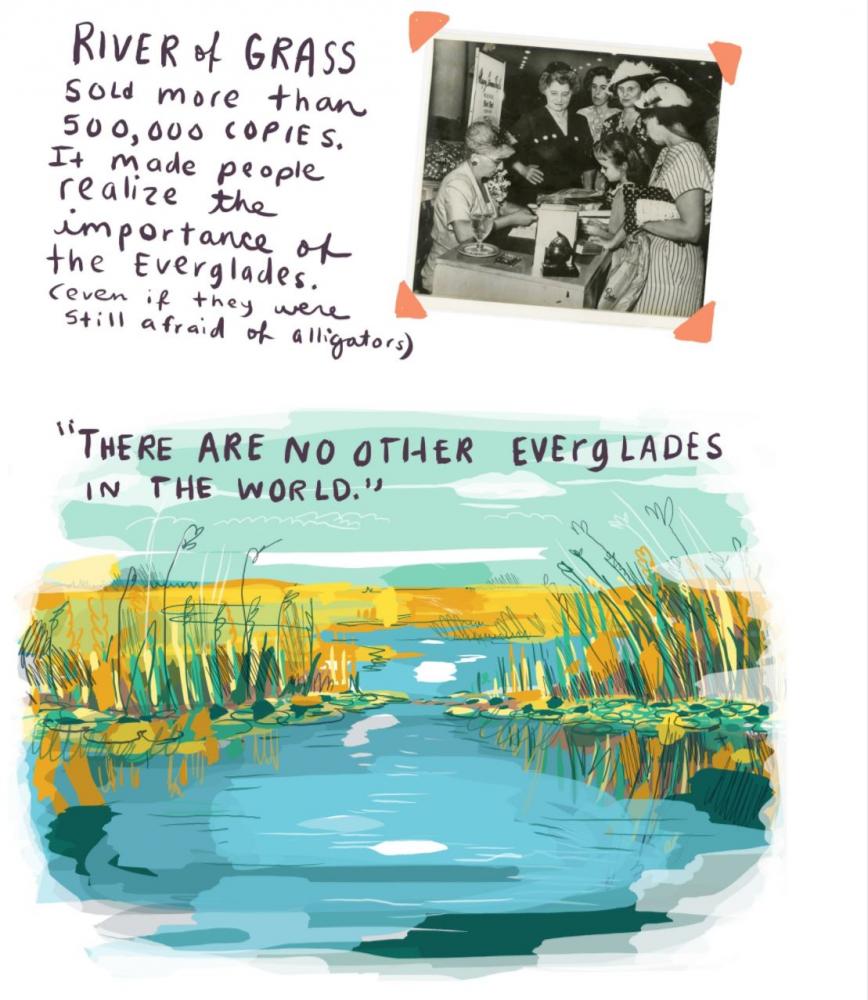 Florida is a place where conservation and development fight eternally, so it’s less an irony than a matter of course that the city of Parkland owes its comfortable land to the partial draining of the Everglades. Something Marjory wouldn’t have liked. But Florida rarely says no to development, especially if it comes in the shape of a stucco strip mall with a nail salon and smoothie shop. 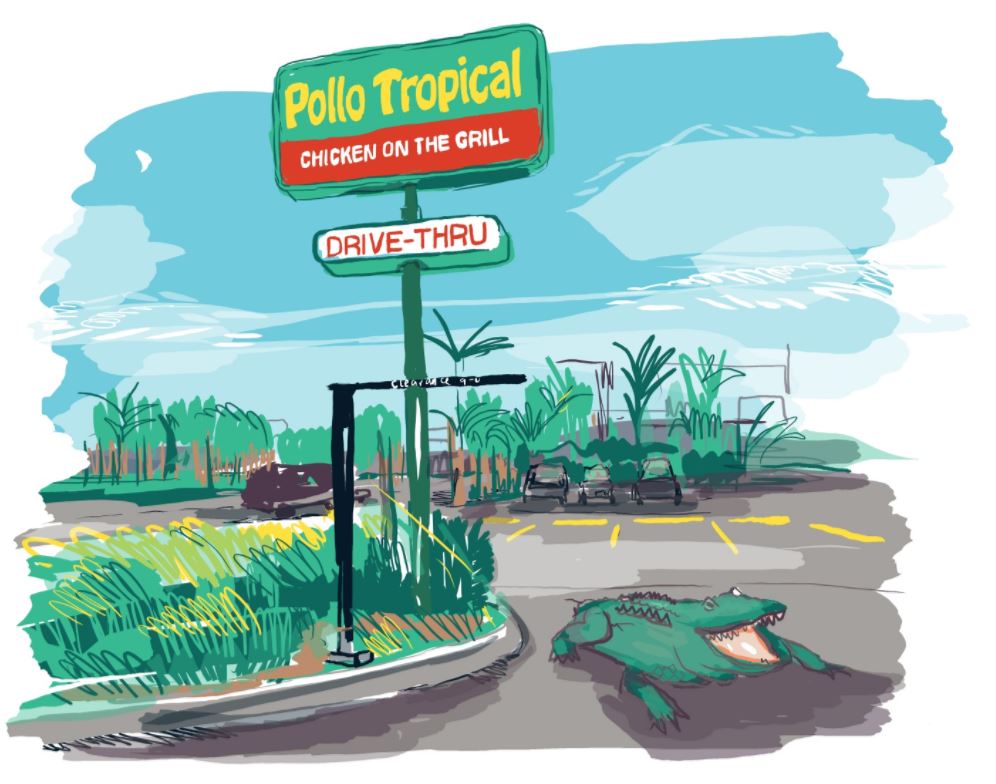 The Florida that Stoneman Douglas helped shape has many, many imperfections—but it’s certainly a more just and a more beautiful place because of her efforts. What was so wonderful about Marjory Stoneman Douglas was her ability to staunchly advocate for animals, for plants, and for people—without letting setbacks and criticism defeat her tenacity or crush her wit. 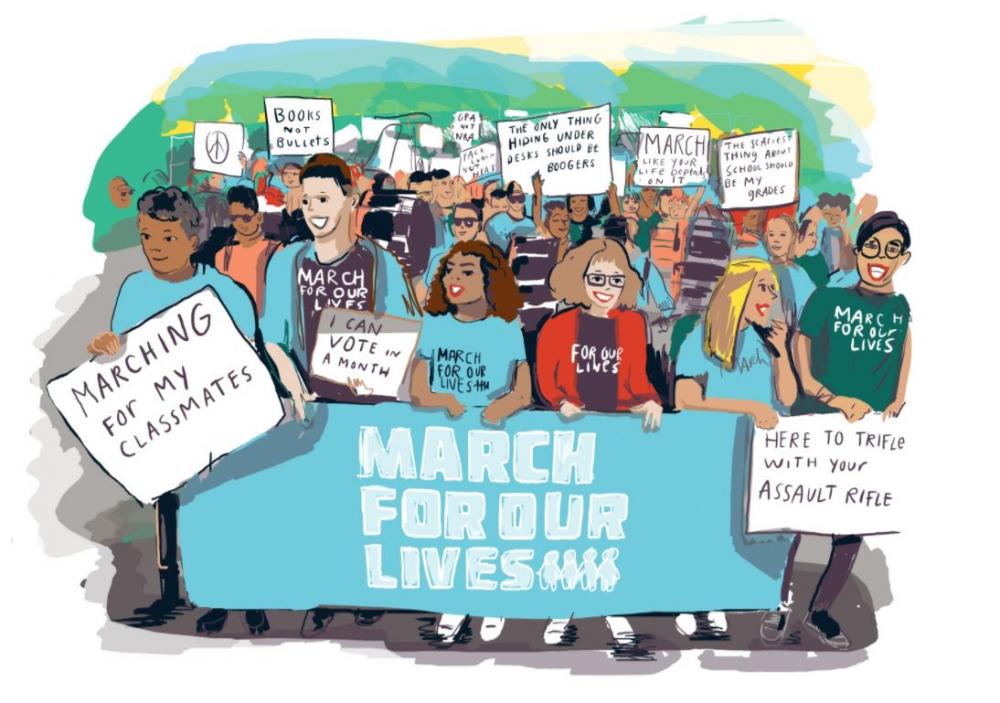 Sarah Lazarovic is an artist and creative director. As a journalist, she's worked for almost every publication in Canada, covering news and cultural events in comic form. In 2015, her live sketching of a Rob Ford speech won gold at the Online News Association awards. As a Massey Fellow at the University of Toronto in 2014, she studied behavioral economics and environmental sustainability. Her book, A Bunch of Pretty Things I Did Not Buy (Penguin 2014), is available at fine libraries everywhere.

Print, digital or both. Get Yes! Magazine in your inbox.