Rank-and-file teachers denounced the Oklahoma Education Association (OEA) for collaborating with school officials and the media to encourage a back-to-work movement to end the strike. 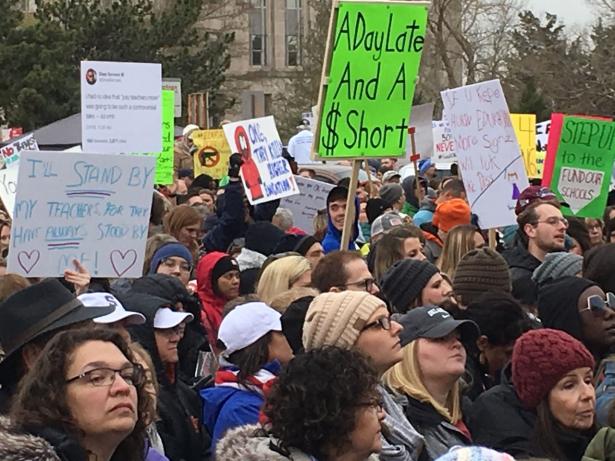 The powerful strike by Oklahoma teachers, now in its ninth day, is in danger of being betrayed and shut down by the unions before teachers win their demands for a $10,000 pay increase and the restoration of school funding cuts over the last decade.

Rank-and-file teachers denounced the Oklahoma Education Association (OEA) for collaborating with school officials and the media to encourage a back-to-work movement to end the strike. “OEA circulated fliers today saying we are at 95 percent of our demands, which is not true,” Ashley, a teacher from Norman, Oklahoma told the World Socialist Web Site Teacher Newsletter. “They are ready for it to end, the teachers are not,” she said. 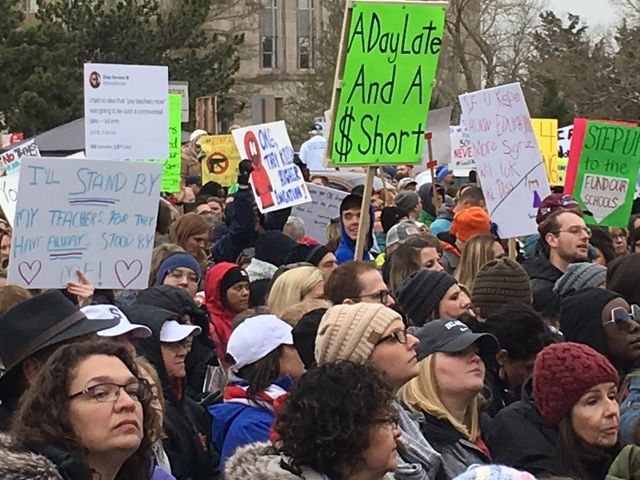 From the beginning, the OEA and the smaller Oklahoma City American Federation of Teachers (AFT) opposed the strike, which only occurred because tens of thousands of rank-and-file teachers pushed for it on social media after the nine-day strike by West Virginia teachers. In a last-minute effort to prevent the walkout, the unions hailed as “historic” an insulting pay and funding bill, passed by Democrats and Republicans, which would have left the state still near the bottom in the US in terms of teacher pay and school funding.

While thousands of teachers, students and their supporters from all over the state have repeatedly turned up at the capitol in Oklahoma City, the unions have sought to wear them down by encouraging false hopes that they could obtain increased funding by appealing to the governor and state legislature. Predictably, Republican Governor Mary Fallin and the state legislators have refused to do so.

After Fallin repealed a motel/hotel tax Tuesday and said she would not even entertain overturning a reduction in capital gains taxes, OEA President Alicia Priest dropped those demands as the prerequisite to end the strike, and said that the only way to improve education was to vote for the Democrats in November.

Then on Tuesday OEA functionaries circulated a leaflet to protesters at the state capitol announcing that virtually all of its demands had been met. The Tulsa World reported that six teachers from Oklahoma City’s Cesar Chavez Elementary School confronted OEA Vice President Katherine Bishop at the union table inside the Capitol rotunda. “We’re at a standstill with these two chambers,” Bishop told the group. “We’re about $25 million off, so we’re so close.” 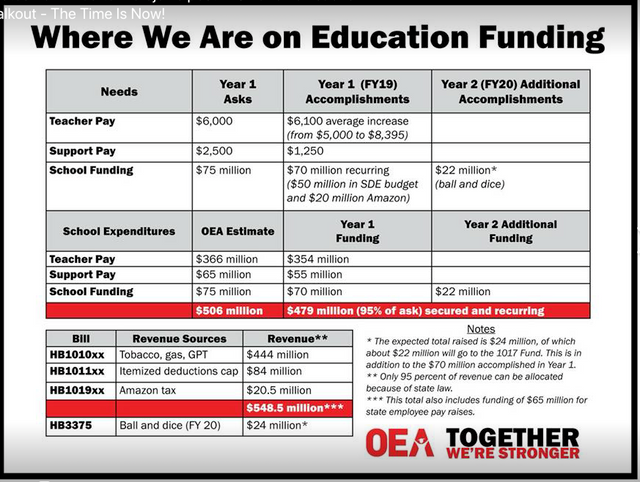 Leaflet passed out by the OEA on Wednesday (Source: Oklahoma Teacher Walkout-The Time is Now!)

Third-grade teacher Molly Jaymes told her, “That’s where I think there’s a disconnect with OEA. It feels almost celebratory and our standard is so much higher.”

On the Facebook page “Oklahoma Teacher Walkout-The Time is Now!” educators overwhelmingly said they would continue the walkout even if the OEA called it off. They urged teachers to organize sickouts in districts that planned to reopen schools. “This is about teachers fighting for funding for students and the funding has not been met,” one teacher wrote. “Why is the OEA acting half a$$ on its promises of what to fight for and releasing this crazy info?”

While the largest districts—Oklahoma City, Tulsa, Norman and Broken Arrow—announced they would remain closed today, other districts are reopening, seeking to put pressure on teachers to return. In Tulsa, where teachers completed a 110-mile march to the state capitol and a survey showed 80 percent of its members wanted to continue the strike, the head of the Tulsa Classroom Teachers Association could not call off the strike but said, “I believe it is time to focus on November.”

The strikebreaking role of the teacher unions underscores the need for Oklahoma educators to break completely with the OEA and AFT and reject its political subordination of teachers to the Democratic Party, which is just as much a corporate-controlled enemy of public education as the Republicans.

Rank-and-file committees should be elected at every school and in every community to take this struggle forward. These committees should fight for the mobilization of every section of workers in Oklahoma—public employees, energy industry workers, health care and other workers—and link up with teachers in Arizona, Kentucky, and other states to prepare a general strike to defend the right to public education. 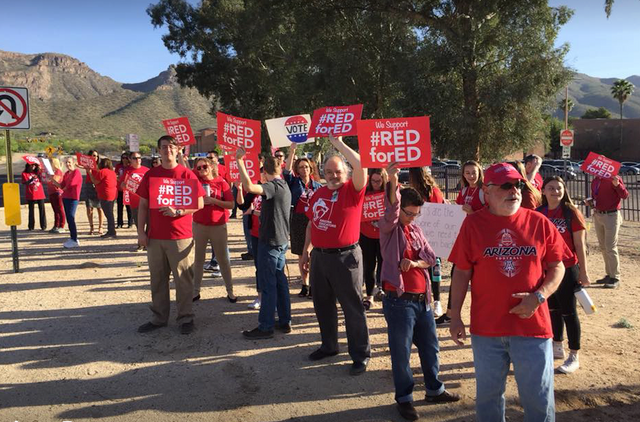 Educators from throughout Kentucky are preparing to converge on the capitol building in Frankfort on Friday to oppose Governor Matt Bevin’s attack on teacher pensions, which was smuggled into a “sewer bill” passed last week and signed by the governor. Many teachers are calling for a “wildcat” strike Friday and for doubling the numbers that participated in the last demonstration at the capitol on April 2, estimated at 5,000.

The bill, passed by the state senate in the middle of the night, just before their 10-day spring recess, includes the destruction of defined-benefit pensions for any future teachers in Kentucky, tying them to a 401(k)-type “hybrid” plan subject to the gyrations of Wall Street. Most significantly, it removes the “inviolability” of teachers’ pensions, which has been embedded in Kentucky statutes since 1993. Removing this clause allows the pensions to be changed, or even rescinded, at any time. Teachers in Kentucky are not eligible for Social Security.

The Kentucky Education Association has repeatedly opposed any strike action and has warned teachers that a walkout is illegal. The KEA acknowledged that its members are eager to attend the rally but has not endorsed anything other than urging those who can “legally” participate to do so. The KEA is not organizing transportation or logistics, leaving teachers to fend for themselves.

One teacher posted, “Remember, Bevin believes cuts to public education do not go far enough and supports privatizing education. He supports establishing private schools where teachers earn lower salaries, reduced benefits, and firing teachers at will. Remember, he supports eliminating tenure in our universities... ask yourself how long will it be until that idea comes to the K-12 level?”

Thousands of Arizona teachers and parents took part in protests before the start of the school day Wednesday at more than 1,000 schools across the state. Teachers are demanding a 20 percent pay raise and oppose the budget-cutting attacks of Governor Doug Ducey, who has insisted he will not give them anything more than a one percent pay hike.

A poll on the Facebook page, Arizona Educators United, found that more than 17,000 teachers are in favor of a statewide strike, and many are pressing, despite the opposition of the Arizona Education Association, to set a date for the walkout.

“Teachers from Kentucky and Arizona have been vocally supportive of us,” Ashley, the teacher from Norman, told the WSWS. “This is the time to join together. We have a secretary of education [Betsy DeVos] who is trying to dismantle public education. We have 85 percent support in my state for this walkout; the momentum is there. Those in public education know what is at stake with privatization—schools that can discriminate against special needs children or those who cannot pay.

“At the national level, our president has shown that social welfare is at the bottom of his list of concerns. To make us forget the struggles in our own backyard, he wants us to be constantly united against others—immigrants, Muslims, the Middle East as a whole. There is terrible inequality in the country.”

After being forced to report on the wave of teacher strikes and protests, the national news media has remained silent for days on the Oklahoma strike, well aware of the dangers to the corporate and financial elite of this movement, which has emerged outside of the control of the unions. At the same time, the growth of the class struggle in the US and internationally is not a small factor in the drive for war against Syria and Russia.

Asked about the drive to war, a teacher from Phoenix, Arizona said, “From the perspective of a teacher, a parent and mother, the concept of war is frightening. I teach world history, and I ask the kids if they see any similarities in aspects of American society with Nazi Germany. The population can be manipulated to back wars. They set up external conflicts to decrease or suppress internal conflicts,” like the teachers’ strikes, she said.