The Supreme Court will now decide whether, despite having aged nearly two centuries, the fateful words of the Stevens treaties from the 1850s still guarantee greater protection for tribal interests. 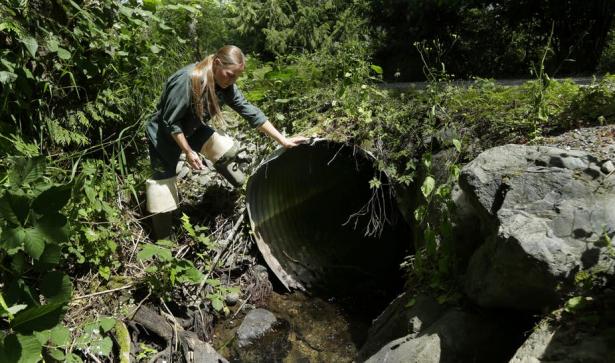 Culverts installed for roads have led to a decline in salmon, which Northwest Indian tribes were ensured access to by treaty. ,AP Photo/Ted S. Warren

On April 18, the United States Supreme Court will hear oral arguments in Washington v. United States, which pits the state of Washington against the United States and 21 Indian tribes. The main question in the case is narrow – whether the state must quickly replace hundreds of culverts that allow the flow of water under roads but also block salmon migration. Yet the underlying issue is far broader.

At stake in the case is the Supreme Court’s ongoing role as the nation’s highest arbiter of justice. Despite immense changes, that role remains grounded in a 229-year-old Constitution premised on the supremacy of federal treaties and individual rights.

In previous cases, the Supreme Court upheld the tribes’ rights to fish salmon, spelled out by various treaties entered in the 1850s. But, having insulated those rights from destruction previously, the court must now decide their meaning for the 21st century and beyond. That decision may say more about what justice means in our modern legal system than it does about tribes, salmon or culverts.

‘As justice and reason demand’

In the mid-1800s, the United States’ zeal for expansion and growth resulted in the removal of Indian people and the acquisition of their territory, often through the use of treaties.

Isaac Stevens, the first governor of the territory of Washington, negotiated treaties on behalf of the United States with tribes across the Pacific Northwest and did so using similar treaty forms and language. In the heart of salmon country, Stevens recognized the importance of fishing to the tribes and, to persuade them to cede vast swaths of land, he emphasized language in the treaties that would preserve the tribal “right of taking fish, at all usual and accustomed grounds and stations…in common with all citizens of the Territory.” In fact, while negotiating one treaty, Stevens promised the tribes that the “paper secures your fish.” 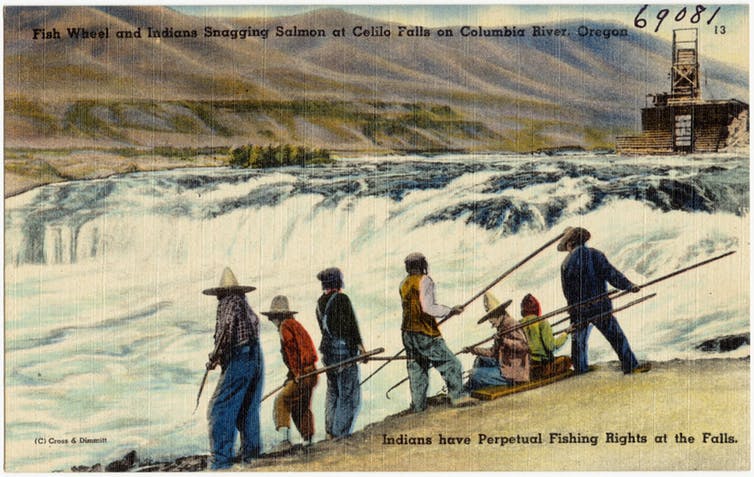 Northwest Indians pictured fishing for salmon in the middle of the 20th century, competing with a fishing wheel in the background.  Boston Public Library Tichnor Brothers collection

There was an abundance of salmon at the time. However, the explosion of settlers in the late 1800s and the proliferation of canneries and commercial fishing operations quickly created competition with tribal rights. Within decades, tribes’ rights to salmon were threatened by non-Indian interference and declining fish populations. The United States, acting on the tribes’ behalf, went before before the Supreme Court seeking to protect the terms of the treaties.

In 1905, the court was asked to resolve the question of whether non-Indians who erected fish wheels to capture salmon could fence off an area, thereby excluding tribal fishermen who sought to fish at their usual and accustomed ground. The court, saying it interpreted the treaties “as justice and reason demand,” upheld the treaty claims.

Recognizing their federal supremacy, the court rejected arguments that the admission of Washington to the Union on equal footing with other states destroyed the rights tribes previously secured in agreements with the United States. According to the court, the treaties “seemed to promise more, and give the word of the nation for more” than just fishing like all other citizens.

Despite that early victory, both tribal treaty rights and salmon populations continued to be threatened. In the 1960s and 1970s, the state of Washington engaged in a concerted effort to denigrate tribal rights, leading to “fish-in” protests by natives, multiple arrests, and violence.

Once again, the courts were called upon to render justice. The central case, brought by tribes and the United States on their behalf against Washington, was filed in 1970. And as in 1905, courts honored tribal rights, deciding that tribes were entitled to half of the salmon harvest. In 1979, the Supreme Court affirmed this. Later decisions even included fish raised in hatcheries.

But salmon populations continued to plummet, putting more and more pressure on tribes’ ability to exercise their rights. As a result, in 2001, 21 tribes in Washington revived the 1970 litigation by asking the federal courts to decide whether the state of Washington was violating the treaties by building roads across salmon streams using culverts that closed off upstream migration. In doing so, the tribes relied upon a 1997 study showing that hundreds of culverts blocked fish passage and that replacing even half of the culverts would produce 200,000 more salmon each year.

According to the tribes, though earlier decisions had preserved their rights, without additional protections for salmon habitat and populations, they would only retain the right to witness wild salmon go extinct.

Both the federal trial court and the Ninth Circuit Court of Appeals agreed with the tribes. Indeed, the trial court entered a permanent injunction requiring the state to replace hundreds of culverts within the next 17 years. Echoing the 1905 Supreme Court, the Ninth Circuit determined that the treaties promised more than just access to fishing sites. The treaties also promised that there would be fish “sufficient to sustain them.”

The state of Washington claims the treaties did not promise that much. They point to other actions of the federal government that hurt salmon populations and argue that complying with the injunction would require reallocating billions of additional dollars, and now ask the Supreme Court to reverse those lower court decisions. In the state’s view, the rights claimed by the tribes and recognized by the lower courts are “new” and not contemplated by the 160-year-old treaties.

The Supreme Court will now decide whether, despite having aged nearly two centuries, those 20 fateful words of the Stevens treaties from the 1850s still guarantee greater protection for tribal interests.

Its decision will have impact far beyond Washington state. While the “right to take fish” language of the Stevens treaties is unique to the tribes of the Northwest, tribes across the country continue to exercise treaty rights to hunt and fish in their historical homelands.

For example, the decision could provide more legal ammunition for those supporting recent tribal movements in support of Bears Ears or to stop the Dakota Access pipeline. Even if the court sides with Washington, the case is already prompting broader discussion of tribal rights nationally and could lead to more state-tribal cooperation to avoid similar challenges in the future.

More importantly, resolving this case demands an accounting of “the word of the nation,” which the court has largely honored since that 1905 decision. Although much has changed, the words of treaties remain, in the Constitution’s words, the “supreme law of the land.” But, without meaningful protection like that sought by the tribes in Washington v. United States, arguably those words will soon be rendered meaningless.

Supreme law or not, what good is the “right to take fish” if there are no more fish to take? Therefore, the crucial question before the Supreme Court is whether, beyond simply preserving the words of treaty rights, doing right by our Constitutional ideals - doing justice - demands more.