Sixty-year-old Keith Hunter lived in St. James, Louisiana, for roughly 27 years, and during that time, he watched as the sugarcane farms gave way to oil storage tanks and as a railroad terminal was being built down the road, all visible from his front yard. 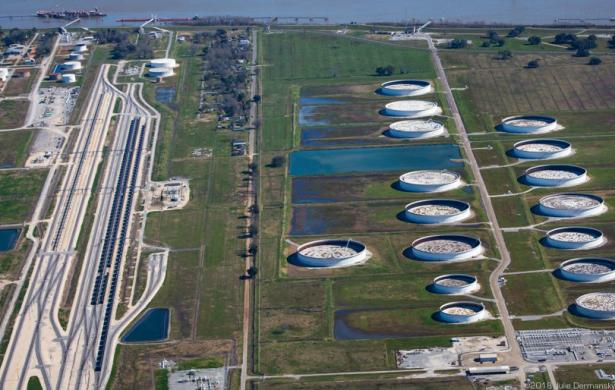 Hunter was an outspoken critic of the industrialization of his neighborhood. And in a similar fashion as some of his neighbors, Hunter died on February 10 following a respiratory illness.

The town of St. James lies in St. James Parish, about 50 miles west of New Orleans. Despite its location along a stretch of Mississippi River between New Orleans and Baton Rouge known as both the “Petrochemical Corridor” and “Cancer Alley,” St. James remained partially rural until fairly recently.

In 2014 the parish adopted a land use plan, which allowed industrial development along the Mississippi River in a portion of St. James known as District 5. While the area was already home to some industry, it suddenly became ideal for new developments.

Most of the area’s wealthier residents, who owned large tracts of property, sold them to chemical plant companies and relocated. Only a fraction of the small town's residents, mostly lower income and African American, remain in St. James, including Hunter’s family. Many of them also wish to relocate but can’t because their homes have been devalued by the railway terminal and oil storage tanks that have popped up next to them.

I interviewed Hunter on his porch a year before he died. He expressed dismay that local politicians had let a handful of oil storage tanks in the district grow into expansive tank farms and a railway terminal for offloading crude oil go up just a couple hundred feet from people’s homes. Besides what he could see from his own property, NuStar Energy and Plains Marketing LP had added more oil storage tanks to their locations along St. James’ River Road. And Chinese chemical giant Yuhuang Chemical Inc. has begun development of a $1.85 billion methanol facility just over three miles away.

“Instead of buying the people out, they are waiting for us to die off,” Hunter told me last year. “That is their plan — they don’t have to settle with us.”

“Those oil tanks you see, owned by NuStar [Energy] leak benzene, a known carcinogen,” he said, and proceeded to list the names of his neighbors who had recently died of cancer or respiratory disease. “There are only a handful of families back here. There is not going to be anyone back left to settle with.”

Hunter had spoken with a representative from NuStar, saying he wanted to be bought out but told me he had no faith that would happen.

Geraldine Mayho, one of Hunter’s neighbors, also worries about dying before she can get out of St. James. Her doctor has said her medical issues were possibly related to chemical toxicity and that leaving the area would be advisable, but without the money to leave, she feels trapped, even as she packs up her life in bags and boxes.

Besides worrying about air pollutants causing cancer, community members are also concerned about their town’s lack of evacuation route.  If an industrial accident or natural disaster blocked the one public road into and out of the area, they would be unable to escape.

Pastor Harry Joseph of the Mount Triumph Baptist Church in St. James began pressuring the local government to provide an exit route for those in the area. He is involved in a lawsuit brought by Tulane University’s legal clinic, which is trying to stop the Bayou Bridge pipeline from being built in St. James, in part because the community doesn’t have an evacuation route. Joseph made his concerns known to the parish council last year, but the council has not yet taken any action.

Though nearly everyone I spoke to in St James said they have a health problem caused by chemical exposure and can list the names of neighbors who died or are suffering from cancer, those concerns are dismissed by regulators at Louisiana’s Department of Health and the Louisiana Department of Environmental Quality (DEP).

“If people have general cancer concerns we refer residents to the Louisiana Tumor Registry for information and cancer statistics,” Robert Johannessen, communications director for the state health department, wrote in an email.

However, the registry doesn’t release data on a local level, preventing a true picture of cancer rates in the St. James area from emerging.

“We want a health survey,” Mayho said. Like Hunter, she can see oil storage tanks from her house but does not believe the state is concerned about the proximity.

“If you don’t look for a problem, you won’t find it,” Wilma Subra, a chemist, told me. Subra is the technical advisor for the Louisiana Environmental Action Network (LEAN), an advocacy group based in Baton Rouge.

She has worked to detect leaks from oil and gas industry sites with Earthworks, an environmental group on whose board she sits.

Subra and Earthworks’ Sharon Wilson used a FLIR camera to detect emissions coming from the oil storage tanks near Hunter's house in April 2016 and October 2017.  The high-tech camera, designed to help pinpoint emissions via infrared footage, makes the invisible visible. The footage doesn’t indicate what the emissions are, but it does show where and when there are leaks.

Oil storage tanks often leak the carcinogen benzene as well as other chemicals that can be harmful to inhale. Placing an air canister test closest to the emissions point would identify exactly what and how much is leaking.

Subra filed air quality complaints with the DEQ and made the FLIR camera records available as evidence. But her complaints did not result in the DEQ initiating any air quality monitoring at the tanks in St. James, as she hoped they would.

Gregory Langley, a DEQ spokesperson, confirmed that the agency didn’t dispatch anyone with a FLIR camera to St. James over the last two years and had not performed any air canister testing there. He wrote: “The agency does canister sampling that does monitor for benzene in Dutchtown in Ascension parish [24 miles away] and Kenner in Jefferson parish [42 mile away].”

Langley admitted that DEQ’s testing in those areas would not give St. James residents an idea if their town’s tanks were leaking benzene around them. “The analysis will only show what is present in the air and the concentrations at that time. It cannot provide the source of those compounds or which parish it derived from,” said Langley via email.

The DEQ relies heavily on industry self-reporting its own chemical emissions. Langley further said: “Federal regulations require refiners to routinely monitor for leaks and to fix any equipment found leaking. The plants have another incentive to comply: leaking product to the atmosphere represents a loss of money.”

According to Langley, “The Clean Air Act requires refineries to develop and implement a Leak Detection and Repair (DAR) program to control fugitive emissions. Fugitive emissions occur from valves, pumps, compressors, pressure relief valves, flanges, connectors, and other piping components.” Yet, Subra said, she and Wilson find leaks at every oil and gas site they photograph with the FLIR camera.

The Guardian has reported that, according to the DEQ, “the collection of plants that surround St. James are compliant with state and federal regulations.” If true, the fact that Trump’s Environmental Protection Agency has announced plans to roll back Obama-era rules governing pollution from oil and gas operations doesn’t bode well for those in St. James already convinced the air is polluted. The plans include regulations for volatile organic compounds (VOCs), which contribute to “ground-level ozone, air pollution that can aggravate asthma and contribute to early deaths from respiratory disease.”

LEAN is spearheading talks with members of the industries operating in St. James about a potential buy-out of about 60 homes in Hunter’s neighborhood. “I understand why people there feel forgotten,” Marylee Orr, executive director of LEAN, said, “but we are working diligently to find a solution to get those who want to leave, out.”

At this point, helping the residents of St. James relocate seems more feasible than assuring them that the air they are breathing is clean. Hunter came to the same conclusion before his untimely death.

Julie Dermansky is a multimedia reporter and artist based in New Orleans. She is an affiliate scholar at Rutgers University’s Center for the Study of Genocide and Human Rights. Visit her website at www.jsdart.com.