labor Public Servants Are Losing Their Foothold in the Middle Class

For generations of Americans, working for a state or local government — as a teacher, firefighter, bus driver or nurse — provided a comfortable nook in the middle class. But they are now finding themselves financially downgraded. 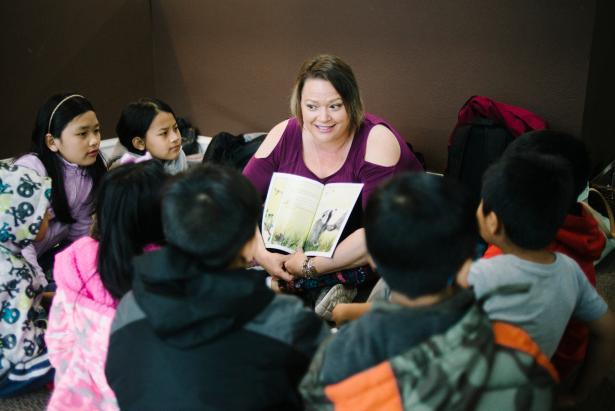 The anxiety and seething anger that followed the disappearance of middle-income jobs in factory towns has helped reshape the American political map and topple longstanding policies on tariffs and immigration.

But globalization and automation aren’t the only forces responsible for the loss of those reliable paychecks. So is the steady erosion of the public sector.

For generations of Americans, working for a state or local government — as a teacher, firefighter, bus driver or nurse — provided a comfortable nook in the middle class. No less than automobile assembly lines and steel plants, the public sector ensured that even workers without a college education could afford a home, a minivan, movie nights and a family vacation.

In recent years, though, the ranks of state and local employees have languished even as the populations they serve have grown. They now account for the smallest share of the American civilian work force since 1967.

The 19.5 million workers who remain are finding themselves financially downgraded. Teachers who have been protesting low wages and sparse resources in Oklahoma, West Virginia and Kentucky — and those in Arizona who say they plan to walk out on Thursday — are just one thread in that larger skein.

“I was surprised to realize along the way I was no longer middle class,” said Teresa Moore, who has spent 30 years investigating complaints of abused or neglected children, veterans and seniors in Oklahoma.

She raised two daughters in Alex, a rural dot southwest of the capital, on her salary. But when she applied for a mortgage nine years ago, the loan officer casually described her as “low income.”

At 57, Ms. Moore now earns just over $43,000, which she supplements with a part-time job as a computer technician.

The private sector has been more welcoming. During 97 consecutive months of job growth, it created 18.6 million positions, a 17 percent increase.

But that impressive streak comes with an asterisk. Many of the jobs created — most in service industries — lack stability and security. They pay little more than the minimum wage and lack predictable hours, insurance, sick days or parental leave.

The result is that the foundation of the middle class continues to be gnawed away even as help-wanted ads multiply.

Reducing state and local payrolls, of course, is a goal that has champions and detractors. Anti-tax crusaders, concerned about cost and overreach, have longed for a smaller government that delivers only the most limited services. Public-sector defenders worry that shortages of restaurant inspectors, rat exterminators, mental health counselors and the like will hurt neighborhoods. Pothole-studded roads and unreliable garbage pickup don’t entice businesses, either.

Yet whether one views a diminished public sector as vital to economic growth or a threat to health and safety, it is undeniable that it has led to a significant decline in middle-class employment opportunities.

“It’s a tough time to be working in government,” said Neil Reichenberg, executive director of the International Public Management Association for Human Resources. Once there were several attractions to public employment in addition to the mission of making a difference in your community, he added, but incentives like good health insurance and retirement benefits have disappeared. “There’s been a lot of cutbacks that have made government a less competitive employer,” he said.

Government hiring failed to bounce back after the recession in both Republican- and Democratic-led states, and states continued to shed workers through 2013. The recovery’s slow pace held down revenues at the same time as baby boomers began retiring and generous pension and benefit commitments made in fatter years came due.

They couldn’t pay their obligations,” said Edwin Benton, a political scientist at the University of South Florida and the managing editor of anacademic journal, State and Local Government Review. “The epidemic has grown to almost every city and state.”

“We’re in uncharted waters,” he added.

In the past 12 months, local and state payrolls grew by 31,000, a fraction of the historical rate. There are now fewer such workers per capita than there were three decades ago.

Nonetheless, those combined payrolls dwarf those of the federal government, which employs about 2.8 million civilians, including postal workers. That number has shrunk slightly in recent years.

Short of money, many states have also privatized services like managing public water systems, road repair, emergency services or prisons, transferring jobs from the public sector to private companies that have reduced salaries and benefits to increase their profits.

The government employment pinch especially hurts in small and rural counties, where President Trump and other Republicans are popular. These areas tend to lack the number and diversity of private employers found in larger cities, and are therefore more dependent on government jobs.

Oklahoma is one of several Republican-led states where persistent anti-tax sentiment and severe budget cuts have guided policymaking, particularly since 2010, when many candidates supported by Tea Party voters won local offices.

Then, the newly elected governor, Mary Fallin, led the charge to reduce the state’s top income-tax rate and shrink the tax on oil and gas production to 2 percent from 7 percent for new wells. But a sharp drop in oil and gas prices in 2014 delivered an unexpected wallop. Tax revenue evaporated, leaving huge budget shortfalls since then.

Justin Fortney, 41, was one of 200 employees laid off by the state health department this year. “It’s getting more difficult to be a public employee — whether that’s a teacher or public health officer — and see yourself as part of a thriving middle class,” he said.

Mr. Fortney, who lives with his wife and son in Guthrie, 30 miles north of the capital, was forced to start job hunting. “We always made it work,” said Mr. Fortney, who was employed by the state for 12 years and earned about $50,000 annually. “But if you’re going to choose to be a public servant, you have to have in mind that you will live in a small home and drive a sometimes unreliable vehicle.”

He said he worried that talented workers will opt for the private sector. Staffing shortages are common in states across the country.

In Houston, pinched by a property tax cap, the police chief has said his department is short 1,500 to 2,000 officers. In North Carolina, a federal report blamed a 25 percent job vacancy rate at a state prison in Elizabeth City for four deaths that occurred during a breakout attempt.

Back in Oklahoma, state prisons are at 153 percent capacity, while the corrections department has lost a tenth of its staff since 2009. “Our folks are only armed with their self-defense training, a can of pepper spray, and a wing and a prayer that someone will come and help them if they get in trouble,” Joe Allbaugh, the director of the corrections department, has said publicly.

Since 2009, staffing at the state mental health department in Oklahoma is down more than 20 percent, and at the Office of Juvenile Affairs by nearly a quarter. The state Office of Fire Marshal once employed 30 workers, but now has 18.

A report on 2017 state compensation in Oklahoma found that average salaries were 27 percent lower than for comparable jobs in the private sector.

Many government workers take a second job to make ends meet. Eldon Johnson, 40, who cares for children with cerebral palsy and autism at a group home in Norman, works from 2:45 to 10:45 p.m., earning $12.50 an hour, less than some clerks at 7-Eleven. He then drives directly to his better-paying second job at a private mental health center, where he works until 8 a.m.
"There's no way I could make it without a second job,” he said.CreditBrandon Thibodeaux for The New York Times

“There’s no way I could make it without a second job, unless I lived in a box, and maybe had a moped,” said Mr. Johnson, who has worked for the state for 10 years.

Advocates for disadvantaged groups like foster children or the disabled have trouble rallying broad support for budget and tax increases, but public school teachers have been able to recruit additional allies among families with school-age children.

Parents from affluent Republican suburbs like Bixby and Jenks outside Tulsa, for instance, car-pooled for a 100-mile trip to the State Capitol last month to lobby lawmakers for more education funding and raises for teachers.

“My adjusted gross income is $28,000,” said Shala Marshall, a Spanish teacher at Jenks High School. A 17-year veteran with a master’s degree and a finalist for Oklahoma teacher of the year, Ms. Marshall has two children. “I can’t support a family on that,” she said.

So she puts in another 30 hours or so a week tutoring students and selling online the luminescent pink LipSense gloss she wears. That pays for soccer cleats, camp and school pictures, as well as her children’s health insurance.

On April 3, Governor Fallin signed a bill to increase taxes for the first time in 28 years to pay for teacher raises of roughly $6,000 and additional funding for schools. Dozens of Republican lawmakers voted for the measures.
“No one wants to raise taxes, but we’ve got to pay the bills,” said Josh West, a freshman Republican from Grove, where his four children attend public school.

He was one of several lawmakers to meet with Bixby and Jenks parents over box lunches from Chick-fil-A. An Army veteran, Mr. West said he had been criticized by conservative groups for refusing to sign a pledge to never to raise taxes.

“My district just wants to fix the problem,” Mr. West said. “They don’t care if you’re Republican or Democrat.”

Several Republicans in the administration and Legislature now concede that tax cutting got out of hand. “I was rather vocal last year as the appropriations chair that even as a Republican, we had gone too far and it was time to start investing again in Oklahoma,” said Leslie Osborn, a representative from Mustang.

The recent budget also includes small pay raises for other state workers. Ms. Moore, for instance, who watches over vulnerable adults, is slated to get an additional $750 a year.

But the Department of Human Services, where she works, won’t be able to restore any of the 1,200 jobs eliminated over the past three years, leaving the agency with 6,109 full-time employees. Those figures don’t include 800 vacancies that cannot be filled because the budget is overstretched.

So Ms. Moore will still be responsible for roughly a third of the state, covering 25 counties, 19,000 square miles, and more than 100 long-term care institutions that care for older or disabled residents as well as those with dementia.

“That’s a lot of windshield time,” she said.

Because of the cuts, the agency extended the deadline for maltreatment investigations at nursing homes. Rather than beginning within seven days of a complaint, they must now start within 30 days.

Ms. Moore’s friends and neighbors hold conflicting views of her taxpayer-funded job. “The minute they have someone in the nursing home they perceive to be mistreated, we’re the first people they come to,” she said. “They want us when they need us. And when they no longer need us again, they don’t want us.”

Some are resentful that they are being asked to pay for benefits that they themselves struggle to afford.

“I asked my brother, ‘How do you feel about this pay raise?’” Ms. Moore recalled. “He said: ‘I want you to have it. You deserve it. But we don’t feel like we should pay for it.’”