Before the Chalk Dust Settles: Building on the 2018 Teachers’ Mobilization

By bargaining for and with the larger community, teachers are reinventing collective bargaining. 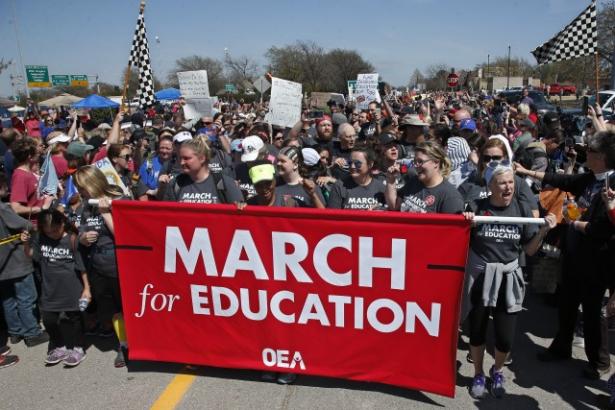 Marchers cheer as they cross the finish line at the Oklahoma State Capitol after marching 110 miles from Tulsa, as protests continue over school funding, AP Photo/Sue Ogrocki

Why are we walking?” asked Alicia Priest, president of the Oklahoma Education Association. “There are 700,000 reasons why: our students. And they deserve better. … They see broken chairs in class, outdated textbooks that are duct taped together, and class sizes that have ballooned.”

While labor’s overall circumstances are certainly dire, we’re at an exciting time of renewed energy in the labor movement. Leading the way this time around are the teachers of West Virginia and Oklahoma (with teachers in Kentucky and Arizona not far behind). All of these states, like most of the country, have seen systematic defunding of public services, and nowhere is that pain felt more than in the classroom. School funding has been shown to improve the outcomes not only for individual students but also for the overall community. If we truly want a strong economy where everyone (most especially black and brown students) can thrive, funding public education is the way to get there.

Perhaps the most exciting aspect of this latest round of teacher labor power is that their demands are broad and inclusive. Even though the teachers who have gone on strike or are considering it are paid well below the average and have terrible benefits, they have put the focus of their demands on their students’ needs, on improving classroom quality and increasing classroom resources. In doing so they made clear that winning a raise for themselves would be insufficient—they have demanded a significant investment in children as well as a win on the “bread and butter” issues. This type of focus helps defeat the false narrative that teachers are just greedy individuals who don’t care about children.

One of the ways in which the teachers have accomplished this is by focusing their energy on corporate-controlled politicians and powerful financial entities whose austerity agendas those politicians have advanced at the expense of public education. By “going up the food chain,” these mass teacher mobilizations have not only avoided pitting themselves against parents, taxpayers, and members of the community who should be their natural allies. They have also helped lay the basis for a broad convergence of allies with common aims.

These mobilizations have thus effectively “flipped the script” that has predominated for more than a generation in our political discourse, a script in which teachers’ unions and their demands were relentlessly scapegoated for everything that ailed public education. By taking to the streets and their state capitals, teachers have demonstrated that there is no force more capable of freeing our schools from the strangling grip of austerity politics than organized teachers standing shoulder to shoulder with their allies.

The mobilizations that recently erupted in a seemingly spontaneous fashion in the “right-to-work” states of West Virginia, Oklahoma, Kentucky, and Arizona aren’t the first such labor actions to have widened the scope of their demands beyond their own bread-and-butter concerns. They are, in fact, similar in vision, language, and tactics to a series of local experiments that have been undertaken by teachers’ unions and their allies in union-friendlier cities such as Chicago, St. Paul, and Seattle since 2012—experiments that have adopted the term “Bargaining for the Common Good.”

Since the Chicago teachers’ strike of 2012, teachers and other public employees in these and a handful of other cities have embraced Bargaining for the Common Good (BCG) in a deliberate effort to challenge the forces that have been making public schools and the entire public sector “broke on purpose,” as Chicago teachers put it.

Campaigns adopting this approach have been seeking to expand and redefine the participants, processes, and purposes of collective bargaining. They have brought such community allies as parents’ groups and racial justice partners into the shaping of bargaining demands from the outset, and demanded that these allies be present during negotiations. They have introduced greater militancy into the bargaining process by staging actions that help illuminate the cozy relationships between the financial interests and political leaders that have led to austerity budgets and the underfunding of public services.

Perhaps most importantly, they have redefined the aims of collective bargaining, recognizing the degree to which financialization, the slashing of taxes on the rich, privatization, and deepening inequality threaten both public services and the health of the communities that depend on them. BCG campaigns have recognized that the real power to determine the public agenda is not held by the school boards or mayoral offices they have traditionally negotiated with, but rather by the financial interests that consistently dictate the priorities of those who hold these offices.

On the surface the settings that have witnessed the recent mass mobilizations of teachers seem enormously different from the locations where BCG campaigns have made the most progress. BCG arose in cities where unions retain a significant presence and where collective bargaining rights are protected by law. The recent teacher mobilizations, by contrast, erupted in “right-to-work” states where unions have little presence and collective bargaining rights are virtually nonexistent. Whereas the BCG campaigns gained traction in diverse cities where they have highlighted how communities of color have been victimized by the defunding of the public sector, the recent teacher mobilizations have erupted in heavily white and rural Kentucky and West Virginia, which rank 45th and 50th, respectively, among the nation’s most racially diverse states. And, whereas successful BCG campaigns were launched only after a year or more of careful planning by their architects, the teacher mobilizations of the past month seemed to erupt almost spontaneously after intense grassroots organizing, much of which took place in a matter of weeks on social media.

Yet despite all of the differences in origin and initial orientation, both the BCG campaigns and the recent teacher mass strikes mobilizations have naturally gravitated toward the same analysis and conclusions.They have come to see the crisis in public education as symptomatic of deep distortions in our economy and political priorities; they have grasped that the plight of teachers and their schools is inextricably tied to the fate of the communities they serve; and teachers in all of these settings have concluded that they needed to fight on behalf of those communities as much as for themselves. That’s what Chicago teachers did in demanding “Schools Chicago’s Children Deserve,” and what West Virginia teachers did in refusing to end their walkout until all state employees received the same raise they had won for themselves, and what Oklahoma teachers did when they demanded levies on the state’s enormously wealthy and notoriously tax-dodging oil and gas industry.

Historically, breakthroughs for worker organization in this country have tended to occur when planning, analysis, and conditions suddenly align in ways that could not have been foreseen among otherwise disparate and diverse workers whose common experiences are teaching them similar lessons.

The extent to which teachers in Seattle and St. Paul, Logan County, West Virginia, and Logan County, Oklahoma, have begun converging around the same logic should alert us that something important is afoot. Historically, breakthroughs for worker organization in this country have tended to occur when planning, analysis, and conditions suddenly align in ways that could not have been foreseen among otherwise disparate and diverse workers whose common experiences are teaching them similar lessons.

Could this be such a moment?

Although there is good reason to fear for the future of the U.S. labor movement, weakened and beset as it is by hostile legal, political, and economic forces, there is also reason to believe that these very conditions might provide the spark for a revival of worker organization. For 40 years, financialization, deregulation, neo-liberal globalization, privatization, and the reorganization of worker-employer relations have gradually undermined private-sector collective bargaining and confined bargaining in the public sector to the narrow ground of wages and benefits, all too often pitting beleaguered taxpayers against unions. The impact of these dynamics has been especially pernicious in communities of color.

We have now reached a point where collective bargaining has become so broken that requires workers to reimagine it as a tool to address the larger forces that are promoting surging inequality, extracting wealth from communities of color, and accelerating the erosion of any semblance of democratic control over the forces that are governing their lives.

No lasting breakthrough will be possible without careful planning, hard work, and, ultimately, greater coordination. A crucial piece of this work must be research and power mapping that can help teachers and others connect the dots, to identify the common culprits who are driving the austerity agenda. In every state we should ask ourselves some key questions: Who are the main power players? What common targets exist across different types of campaigns? What banks or corporations are taking money out of the public budget and how do we band together to get that money back? A number of organizations that investigate and provide answers to such questions have emerged in recent years, among them Little Sis, a grassroots research wiki that consolidates information on corporate power and its influence over government; Hedgeclippers, which documents the harmful impact of hedge funds and private equity on public services; and the Action Center on Race and the Economy (ACRE), which specializes in analyzing the racialized impact of financialization. Research conducted by groups like these could help provide the underpinnings for an increasingly coordinated national movement.

Whether a national movement does emerge will depend heavily on the vision and commitment of the nation’s unions in this crucial hour. Organized labor has never been able to predict or trigger the developments that have led to its revival and reinvention over the course of two centuries. Like all movements of the less powerful, it has had to be opportunistic, acting boldly at the right time by using the best ideas, models, and language at its disposal to build new forms of power for those who lack it. But it has had to be decisive when these windows of opportunity have opened, for they have never stayed open for long. Confronted as they are by powerful enemies, unions must seize the opportunities that these recent teachers’ mobilizations and the pioneering work of recent Bargaining for the Common Good campaigns have presented to them.

Maurice BP-Weeks is Co-Executive Director of the Action Center on Race and the Economy; Marilyn Sneiderman is Executive Director of the Center for Innovation in Worker Organization at the Rutgers School of Management and Labor Relations; Stephen Lerner is a fellow at Georgetown University’s Kalmanovitz Initiative for Labor and the Working Poor, which is directed by Joseph A. McCartin.