This job is killing me: Not a metaphor

One study showed that temps in construction and manufacturing suffer twice the rate of injuries as directly-employed workers. Clearly, OSHA needs to be updated to keep up with corporate chicanery.

April 28, 2018 Shaun Richman Unionist
Printer friendly
This job is killing me: Not a metaphor Published April 28, 2018 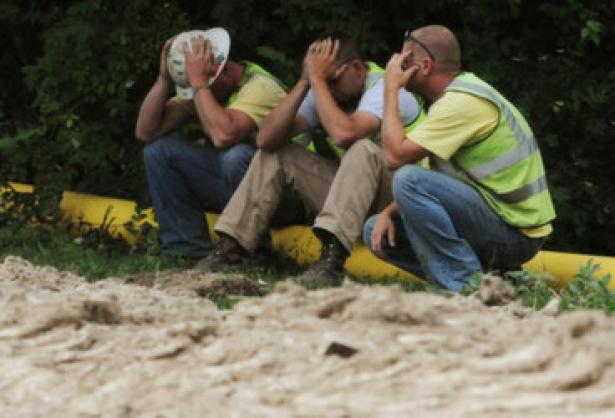 You are more likely to be killed at work than in a terrorist attack or plane crash. On average, thirteen workers die on the job every day. Most of these deaths are completely preventable. And yet the complex web of state and federal agencies and insurance programs meant to protect worker’ssafety and incomes are persistently under-funded and under attack.

Two new books shed light on the dangers we face at workand the laws that are letting us down. Jonathan D. Karmel’s Dying to Work: Death and Injury in the American Workplace (Cornel University Press) is a compelling call for action on a national health crisis that’s hiding in plain sight.

The conventional narrative is that coalmine disasters and factory fires have been extinguished through reform laws. And also that efforts to pass new regulations are “red tape”that threatens jobs. At the center of those somewhat conflicting arguments is the controversial and widely misunderstood Occupational Health & Safety Act (OSHA).

Pushed by a strong labor movement, a Democratic Congress forced Richard Nixon to sign it into law in 1970. The federal agency it created, also called OSHA, has the authority to promulgate industry-specific workplace safety rules and to fine companies that violate them. The law also provides for workplace safety inspectors, whistleblower protections for workers who report potentially unsafe conditions and legal protections for workers who go on wildcat strikes to put an end to a dangerous situation.

Republican politicians – including the president who signed it into law - and the business interests who fund them have hated it since the day it became law. Corporations routinely block its efforts to update safety rules in the courts and appeal the puny fines it levies for their willful violations. As a result, our workplaces are becoming more dangerous

The heart of Karmel ‘s book is a series of heart-breaking (and stomach-turning) stories about preventable workplace injuries and deaths, and the broken lives left behind.

These are just a few: Yvonne Shurelds suffered an “internal decapitation” when the forklift that she was not properly trained to operate backed up into a metal bar. Her employer was fined $7,100 for safety violations. Hannah Phillips lost her arm to a meat grinder at a Kroger grocery store when her ill-fitting uniform snagged on the power switch. She feels “lucky” because the amputation was below the elbow and she was able to get off worker’s comp when she landed a $10.50 an hour job (with no health insurance) at a non-union Honda plant. Paul King was electrocuted on the roofof Terminal 3 at Logan airport while doing routine maintenance work. He was not trained as an electrician and his employer – a subcontractor of a subcontractor - did not provide him with protective gear or electrical test equipment. It contested its $54,000 OSHA fine, and neglected to include his last deadly hours of work in the final paycheck it sent to his widow.

Seemingly every widow in these stories is tormented by unannounced visits from inspectors, hoping to find her remarried so the state can discontinue its paltry workman’s comp survivor benefits. None of these families left behind gets a big payout, or even returns to the standard of living they had scraped together before the fateful accidents.

Karmel notes that the workers comp system was a “grand bargain” that preceded the New Deal by decades. In exchange for providing some insurance for workers who lose life and limb, it shields employers from greater liability for their callous disregard for their human resources. Workers compensation laws generally preventsurvivors from directly suing an employer for damages. Successful suits must include a third party like a subcontractor or machinery manufacturer.

Even this insufficient “varied system of state laws” is under attack. The Koch brothers and other deep-pocketed bosses are funding Republican efforts to reduce benefits or repeal the protections in every state. Right wing governments like Indiana’s compete against their neighboring states by advertising lower insurance rates, in a deadly race to the bottom.

Workplace safety can also be imperiled by intentional acts of violence. That’s the subject of Jeremy Milloy’s excellent new book, Blood, Sweat, and Fear: Violence at Work in the North American Auto Industry, 1960-1980 (University of Illinois Press). This largely forgotten period of routine fistfights, stabbings and shootings in the factories and parking lots of Detroit’s “Big 3” automakers was, Milloy argues, a harbinger of today’s depressingly common mass shootings.

Threatened by foreign competition from Germany and Japan, U.S. auto executives in the 60’s and 70’s – particularly at Chrysler - decided to forgo badly needed modernization of their infrastructure and instead tried to squeeze every last ounce of productivity out of their factories and workers. This produced a toxic culture of speed-ups and bullying that escalated into acts of violence between workers, management and even union representatives.

Milloy dives into the grievance records of union locals in Detroit and across the river in Windsor, Ontario. Violence was pervasive throughout the auto industry, but it was more common and deadlier in Detroit. One explanation is that the America factories had recruited black workers from the south in order to run the plants around the clock, while Canada’s workforce was more racially homogeneous. The racist hostility of some white workers combined with black workers’ own frustrations about being at the bottom of the seniority list and thus first in line for the companies’ annual layoffs to add to the already poisoned environment.

But America’s gun culture also played a role. Then - as now - easy access to firearms made it likelier that what might have been a mere fistfight became a workplace massacre. Milloy notes that in 2009 Ontario passed a law that requires employers to assess and report on the risk of violence to workers and that allows workers to refuse assignments that expose them to that risk. In America meanwhile, 22 states have passed laws that prevent employers from banning guns from the workplace.

Towards the end of Dying to Work, Karmel concedes, “there is no doubt that reported deaths and injuries have declined over the years.” But he poses the provocative question, “is there a number that is acceptable as the cost of doing business? Is one preventable death acceptable?” Of course, anyone who believes in the dignity of workers and the sanctity of human life would answer no. But 40 years of successive Republican administration rolling back workplace protections – and Democratic ones moving too slowly to roll back those cuts and advance new safety rules – makes every workplace a potential Massey Energy mine disaster.

Massey was the company that was criminally liable for a 2010 methane gas explosion that killed 29 mine workers in West Virginia. Several executives including CEO Don Blankenship were convicted - not for violating OSHA standards but because a crusading federal prosecutor put together a solid conspiracy case for their cover-up of unsafe working conditions in the mine. Blankenship retired with a $12 million golden parachute before being sentenced to one whole year in jail. He is currently a leading contender to represent the Republican Party in November’s U.S. Senate election. That race is emblematic of the pathetic left-right divide on workers rights, as Blankenship seeks to replicate Donald Trump’s success with the economically-depressed state’s working class voters who are - in all senses of the phrase - dying to work.

The size of the American workforce has doubled since OSHA was passed in 1970, and many of those new jobs are “temporary” or sub-contracted in order to evade our various labor laws. One study showed that temps in construction and manufacturing suffer twice the rate of injuries as directly-employed workers. Clearly, OSHA needs to be updated to keep up with corporate chicanery.

Karmel suggests a list of reforms that’s longer than an amputated arm.

For starters there’s a bill that’s been gathering dust. The Protecting America’s Workers Act – which would amend OSHA to expand coverage and increase penalties – was first introduced by Sen. Ted Kennedy a decade and a half ago. It’s time to pass it.

Karmel also calls for enhanced civil penalties and criminal prosecution. Usually the idea that stiffer sentences act as deterrence against future crimes beggars belief. Who calmly weighs the consequences during a crime of passion or desperation? But corporate crimes – which unsafe workplaces must be viewed as – are coolly calculated in boardrooms as matters of dollars and sense (and the continued comfort of the far-removed executives).

Why is Don Blankenship running for the Senate instead of learning yoga in a minimum-security jail for another decade or more? And how much does his example of acting with impunity encourage more bosses to write off their workers’ lives as an everyday cost of doing business? Attention must be paid.

Financial penalties, which were set as a specific hard-dollar amount in the original Act, have been raised just once - in 1990. Obviously, a company that kills an employee through willful negligence should pay more than a pittance in fines. Those statutory fines should not only be exponentially increased, but indexed to inflation like almost every other federal regulatory penalty is.

To fix our nation’s patchwork of worker’s compensation laws, Karmel has a slew of proposals. A “know your rights” posting requirements at every workplace - like we have for the minimum wage - is long overdue. A mandate that medical professionals who treat injured workers have no affiliation with the employer and a Medicare-style insurance system to pay for their treatment is pretty common sense. The fact that attorney’s fees for these cases have been reduced or remained stagnant is ridiculous if one believes that “you get what you pay for.” Finally, he calls for a streamlined process to replace the “complex and oppressive legal system that requires employees to bear the burden of establishing their entitlement to benefits.” That sounds to me that we should just federalize the system under a well-funded OHSA (and stop voting for Republicans).

This is a sound agenda, and one that unions should prioritize as a literal matter of life and death.