Labor unrest harmed Democrats in the 1960s and 1970s. This time the GOP might be the loser. 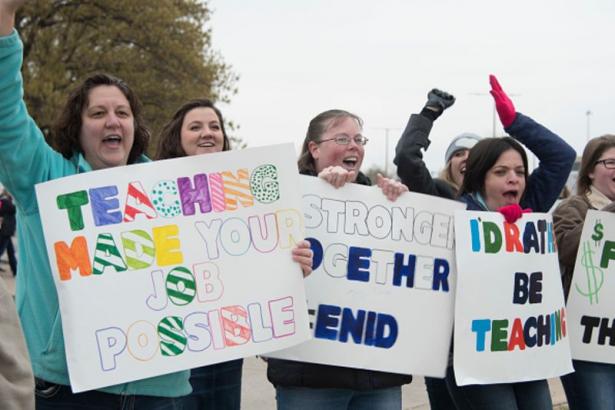 Do they look like radicals? , Photographer: J. Pat Carter/Getty Images

Teachers generally didn’t go on strike for much of the 20th century. Even in the labor-friendly New Deal, teacher unions struggled to gain a foothold. The Wagner Act, passed in 1935, conferred collective-bargaining rights on private workers, but withheld them from public-sector workers.

Nonetheless as unions became entrenched in the postwar United States, the idea that public-sector employees like teachers should also have a right to organize became more palatable. In 1959, Wisconsin, long a leader in progressive legislation, became the first state to pass a law granting public employees the right to strike. Other states followed suit: 22 in all by 1970.

Throughout the 1960s and 1970s, teachers who acquired collective-bargaining rights went on strike at a remarkable rate. These walkouts tended to erupt in bastions of liberalism. New York City, for example, witnessed one of the first major strikes in the early 1960s, when labor organizers Albert Shanker and David Selden managed to unify teachers’ unions into a formidable, disciplined force.

Throughout the 1960s, teachers who went on strike simultaneously embraced many of the social movements of the era, particularly the civil rights movement. National teachers’ unions endorsed Brown v. Board of Education, and over the course of the decade, they became increasingly identified with various liberal causes.

At first this posed no dangers for the unions. Though it may be hard to imagine now, the idea that public-sector unions should exist, and could in fact play a positive role in society, was conventional wisdom among much of the electorate at this time. In Pennsylvania, for example, the historian Jon Shelton has traced how a Republican governor convened a commission in 1968 — headed by a retired executive from Alcoa, no less — that ultimately recommended that public-sector employees, including teachers, be given collective-bargaining rights.

In 1970, the Pennsylvania Legislature passed a far-reaching law that did just that, and even gave public employees limited rights to strike. All of this reflected a belief, however naïve, that teachers and state authorities could meet as equals at the bargaining table. Unions, in this formulation, would serve as a counterweight to the power of government. The head of the Pittsburgh teachers’ union argued that the law had turned Pennsylvania into “one of the most progressive states in the nation.”

Nonetheless, by 1970, the liberal-labor coalition was already fraying, as growing numbers of white working-class voters began to express unease about the drift of the country. The era’s riots, rising crime and, eventually, stagflation and deindustrialization left many Americans questioning the core tenets of liberalism.

In the 1970s, a number of high-profile teachers’ strikes decisively shifted public opinion against unions. In New York City, the image of militant teachers going on strike precisely as the city struggled with bankruptcy helped cement a growing perception that public-sector unions operated against the public interest. Bitter strikes in other big cities — Newark, Philadelphia, Chicago, St. Louis — repelled many moderate voters.

In 1975, teachers in Pittsburgh went on highly visible strike — one of a staggering 478 strikes of public-sector workers that took place that year in the U.S. Though they initially enjoyed popular support, this evaporated by the time the teachers went back to work. As Shelton has written, the strike “significantly widened the gap between what many believed were the interests of labor unions and the interest of the public.”

The image of teachers going on strike — and children home from school for months at a time — seemed to reflect a larger breakdown in what was sometimes called “law and order,” and in Pittsburgh, to say nothing of other cities, teachers found themselves pilloried for allegedly contributing to a collapse of social norms. The strikes helped fuel a growing conservative backlash nationwide.

In Pennsylvania, for example, a Democratic governor convened another commission to re-evaluate public-sector unions. This time, though, the people testifying spoke the language of “right to work.” As the head of Philadelphia’s Chamber of Commerce testified: “The disasters visited upon community after community by striking public employees is eating away at the very fabric of society.” The tide was turning.

In 1980, Ronald Reagan swept to victory, and launched a conservative counter-revolution that is now in its fourth decade. Reagan dealt a formidable blow to public-sector unions after he fired striking air traffic controllers in 1981. In the ensuing years in many states, Republicans — and many centrist Democrats — embraced the idea of cutting taxes, slashing government spending and attacking unions, public and private.

Which brings us to now. The recent teacher strikes are happening in places very far removed from the left-leaning cities of the 1960s and 1970s, and far removed from states like California and New York, where public-sector unions wield considerable power and guard their benefits.

For the most part, the walkouts are happening in places where the mantra of cutting taxes and services — and slashing spending on schools — has reached absurd levels. In Oklahoma, for example, schools have been closed intermittently, not because teachers have been on strike, but because the funding isn’t there to keep them open.

More curious still, these strikes aren’t necessarily being orchestrated by the teachers’ unions in those states. In some cases, they’re happening outside of union leadership whatsoever. And even more surprising, the strikers have significant public support, largely because the teacher demands aren’t simply about higher salaries; they’re about increased funding for education generally.

All of this is significant. The latest teacher strikes aren’t symptoms of a decadent, declining brand of liberalism. They’re a primal scream of populations that are becoming increasingly disenchanted with the pieties and policies of politicians intent on cutting public services down to nothing.

And that should scare Republicans, who run the risk, much like the liberals of old, of being increasingly viewed as holding extreme, even radical views that run contrary to the public interest.