Former presidential hopeful Bernie Sanders is hoping the recent wave of teacher strikes will help him pass a new law that will protect workers fired for union organizing. 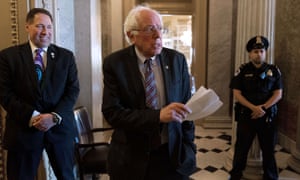 Former presidential hopeful Bernie Sanders is hoping the recent wave of teacher strikes will help him pass a new law that will protect workers fired for union organizing.

Sanders introduced the Workplace Democracy Act in the Senate on Wednesday. The bill has already gained the support of potential 2020 presidential candidates such as Senators Kamala Harris, Elizabeth Warren and Kirsten Gillibrand.

Riding a wave of pro-union momentum generated by teachers’ strikesnationwide, organized labor and its allies are hoping that the 2018 election will finally be the year to pass labor law reform.

The bill would dramatically increase penalties for employers that fire workers illegally for union organizing and streamline the process for seeking legal action against employers.

Currently, employers are not forced to pay punitive fines for firing workers illegally during union drives. Instead, employers merely must pay the difference between what a worker earned after they were fired and what they would have earned if they kept their job, resulting in settlements of only a few thousands dollars after years of litigation.

Union activists are bullish about its prospects. “The mood of the country has shifted a lot, look at the teachers’ strike,” said the National Nurses United co-president Jean Ross. “There is a belief now that taking to the streets does do some good.”

“I think [the teachers’ strikes] are reverberating throughout the country,” said Sanders’ top policy aide, Warren Gunnels. “The American people are looking for big and bold solutions to rebuild a middle class that has been in decline for the last 40 years.”

The current rules are hard for workers, said Shaneice Benbow, who was fired in July 2014 while working at a contractor in the cafeteria in the Pentagon. “It was a brutal process,” she said. “It went on for a period of over three and half years before we were able to win a settlement.”

But this isn’t the first time that organized labor has attempted to use opposition to an unpopular president to build support for labor law reform.

In the early 2000s, many Democrats rallied union voters against Bush by campaigning hard on changing laws to help unions. In 2007, shortly after taking back control from the Republicans, House Democrats passed the Employee Free Choice Act (EFCA) by a margin of 241-185. However, the bill died after it was filibustered in the Senate.

In 2009, after Obama took back the White House and Congress the unions were optimistic that they could pass labor law reform.

However, the bill never even came up for a vote as southern Democrats turned against the bill and Barack Obama refused to take on those Democrats publicly.

Much like the EFCA, the Workplace Democracy Act would allow workers to form unions by merely showing a majority of signatures from their co-workers. Currently, workers are only allowed to form unions after first signing a petition for an election and then often waiting months before the election occurs. During this time period, employers often run scorched-earth style campaigns warning workers of dire consequences.

A 2017 study done by the Economic Policy Institute (EPI) showed that 54% of workers being threatened with loss of their job if they voted to unionize.

Additionally, the Workplace Democracy Act, like EFCA, would force companies to submit to mandatory arbitration if the union and the employer are unable to reach a first union contract after 90 days of bargaining.

An analysis done by EPI showed that 37% of all new unions are unable to achieve a first contract within the first two years of bargaining, effectively leaving many unions toothless in enforcing workplace standards.

However, unlike the Employee Free Choice Act, Sanders’ bill is more bold. It would repeal key sections of the anti-union Taft Hartley law enacted during “the Red Scare” in 1947.

Sanders’ bill would ban so-called “right-to-work” provisions, where workers receiving union representation are allowed to opt out of paying union dues. The Workplace Democracy Act would also overturn Taft-Hartley provisions that prohibit unions from picketing the suppliers or financiers of anti-union companies.

The bill sets up a clash with supporters of a case now before the supreme court. That case, Janus v American Federation of State, County and Municipal Employees, would ban unions charging “agency” or “fair share” fees to non-union members in return for representing them in collective bargaining agreements. If passed Janus would have a devastating impact on union dues.

The teachers’ strikes, many of which have taken place in states where the strikes were illegal, have shown that organized labor is feeling confident despite attempts to undermine it, said Charlotte Garden, a professor of labor law at the University of Seattle. But better protections would help.

“Those strikes illustrate that workers don’t always need protective labor law in order to organize successful, but it certainly helps,” she said.