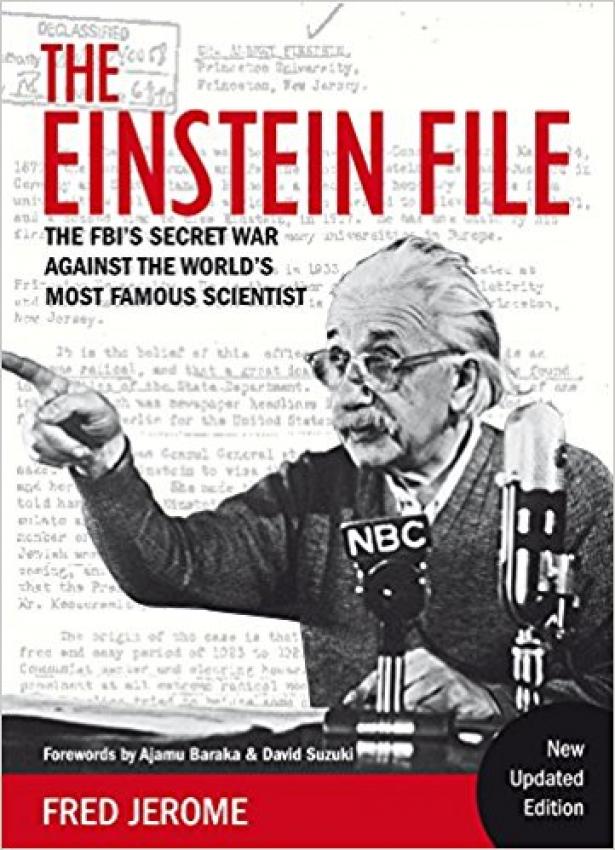 Cover of the book, 'The Einstein File,' by Fred Jerome,

[The following is excerpted from a new edition of the book The Einstein File, by Fred Jerome, which contains for the first time an account of Albert Einstein's inclusion in the FBI's Treason file. As Thomas Pynchon describes it, "This carefully researched and reported account of Einstein's surveillance by the FBI adds new, what Einstein might call 'dimension,' not only to his personal history but maybe even to our own present-day character as a nation, conceived as it was in the moral vacuum of the McCarthy era, shaped by the Cold War and too many ill-conceived adventures overseas, come to maturity in this current precarious hour."

In a letter to my attorney, an official in the US Justice Department first let it slip: "Mr. Einstein is the subject of one Headquarters Office main file, entitled Treason."

"Treason? Einstein? That's amazing!" is the reaction of most people when they hear this news. First they are amazed to hear that the FBI even has a Treason File -- "Never heard about that before!" And then, that Einstein should be included in such a category is ... well, you tell me!

"Why Einstein?" "When did they put him in the Treason category?" -- are but a few of the questions I get when I tell people.

"Must have been a mistake!" is another frequent reaction. One wag responded: "You must have mis-read him -- the guy from the Justice Department -- or maybe he wrote it wrong. He must have meant to say 'Reason.' That sounds more likely: The FBI has set up a 'Reason' category, and Einstein's FBI file is one of the Bureau's main 'Reason' files. That must be it."

But no. Reasonable as that might sound, it is not the FBI. The FBI now acknowledges that its “Central Records System Classification” includes category #61: “Treason” - a category they have maintained and expanded for nearly 100 years (since 1921).*** The Bureau also acknowledges/admits that this “Treason” category contains their reports on more than 22,000 organizations and individuals, including Einstein.

“Well, 22,000 is not really such a large number,” claims one FBI official. “After all,” he argues, “the FBI has hundreds of thousands of people and groups in its ‘Subversive’ files.” Maybe so (an interesting discussion in itself -- for another book), but Treason is arguably the most serious crime in the country -- the only crime defined in the U.S. Constitution. While (so far) none of the 22,000 has been charged with Treason, let alone tried or convicted, presumably they have all been (or still are) at least suspected of Treason -- after all, they are not in File #32 -- Bank Robbery; or File #272 -- Money Laundering. All 22,000 are included in File #61.

Which still leaves one question -- as Gore Vidal put it, “the only question really worth asking: Why?” Why did the FBI begin a“Treason” file in 1921? Why 22,000 names? And, the question we began with: Why Einstein?

It might be simply a coincidence that 1921 was only four years after the Russian Revolution of 1917 -- history's first successful Socialist (communist) revolution inspiring millions of radicals and rebels around the world -- and at that point, just four years after the Bolsheviks took power in Russia, the US Justice Department decided it needed a stronger, more centralized Bureau of Investigation, including a new file on what the government considered "Treason."

Consider this comment in a note I received from the FBI’s Historian John Fox, Ph.D:

The 61 file classification [Treason] began in the early 1920s as domestic subversion investigations, and so its earliest files concern the activities of anarchists, communists, and others considered political radicals or revolutionaries in their day.

This is confirmed by the names of the individuals and organizations listed in the Treason file. No, I’m not going to go through 22,000 names here -- but it turns out that at least two extremely detailed research projects have done that for many if not all those whom the FBI has listed under “Treason.”

And yes, the people and groups listed in the FBI’s Treason File are mostly left-wing or left-leaning, radicals, socialists, and Communists -- also many who might not be, but (as we have come to learn over the years) the FBI would nonetheless have considered troublemakers, dangerous and quite possibly treasonous. And in the 1920s -- as Prof. Kornweibel and his colleagues have so thoroughly documented -- the FBI was extra-interested in accusing African Americans as troublemakers and dangerous.

Surely we can hear many activist voices today noting how little has changed.

These days the FBI historian and other FBI personnel today have all wanted to make it absolutely clear that the Bureau does not consider Einstein in any way involved with Treason. Yet the letter from Mr. Huff to my attorney said simply:

"Mr. Einstein is the subject of one Headquarters Office main file, entitled Treason."

What if the next FBI Historian changes his mind? Or doesn’t want to discuss the question. Or is appointed by someone from today’s Alt-right? (Not so hard to imagine today.) Is there no way to amend the FBI’s file….perhaps a sticker that says, simply “Alt right” or “far right” or even (if you’ll pardon the pun), “Not right.”

The Treason File may well be the focus of future studies, books, perhaps even a TV series. But for now it is worth imagining what Einstein would say if he knew he was on the list. My guess is that he would most likely give us one of his winks and nod towards the statue of Patrick Henry, and then say simply, "Let us 'make the most of it.'"